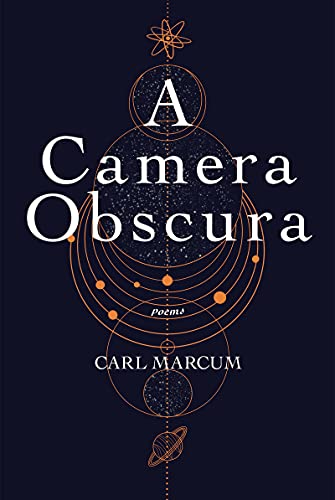 A month ago, in the wake of the conflict between Israelis and Palestinians in Gaza and elsewhere, a poem rapidly gained the absolute and undivided attention of all of the poetry-loving world: fourteen lines by Noor Hindi titled “Fuck Your Lecture on Craft, My People are Dying.”

If you like poetry, and you turned on a computer, you saw it.

It’s hard not to think about it, in fact, reading Carl Marcum’s A Camera Obscura, which is, to put it bluntly, so beautiful it verges on the ridiculous. It is also, for better and for worse, not of its time: forget the future, which feels so present in the work. In a way, this book is from the past. There was a time- we were all alive for it—when people made things just to be beautiful. Glass houses could exist for many reasons beyond being smashed by stones.

A Camera Obscura stands at the crossroads of many such conversations: one could talk about the close, careful pacing of Mr. Marcum’s prose, a storytelling manner that often feels akin to Ted Kooser and Li-Young Lee, were they watching not Nebraska and Pennsylvania but the stars slowly turning above them.

One could talk about the lessons all our grandmothers taught us: that if you curse all the time, the words become meaningless, and praise him for the incredibly rare punctuation of vulgarity that allows him to give weight to his message. We could talk about the elegance of a person who still finds time to stare, in perfect silence, at the stars, the comity of those who’d note the explosions in the stars when we have so many of our own right down here.

We could talk about that. But instead we must talk about whether there is a place for that, now, when crisis is used so often as coin. Is there a place, in a universe that was born of violence, to discuss the beauty of its results when so much is still occurring? Is there a corner of our world where we still have time to count the syllables, to watch the stars? “Tonight, the heavens murmur their promise: Bright and distant violence,” he opens the book before telling the long and laborious tale of one of life’s little beauties: driving mountain switchback roads with a folded map in one’s pocket.

One could talk about those things in a different time, before the rise of “this endless babble, this civilized technology, this cosmic static (“N = R * fs * fp * ne * fl * fi * fc * L,” the penultimate poem,) and one could hypothesize that yes, maybe there is a place for both, for understanding that one can make beauty, that another can turn pain into poetry, though maybe that time has passed. It is still a fine hypothesis to make and, as Marcum closes his last poem, the bookend to his violent stars, “every hypothesis / waits like a good child for some bright reward.”