Camelot's End: Kennedy vs. Carter and the Fight that Broke the Democratic Party 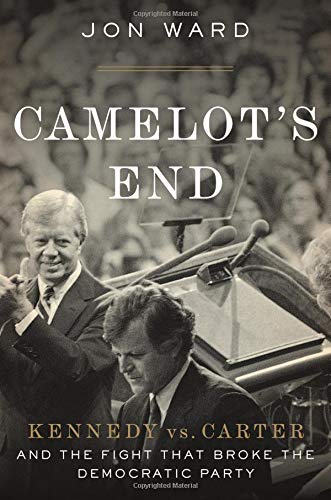 “Camelot’s End thoroughly examines not just the primary campaigns of Carter and Kennedy, but also the human frailties that combined with events to wreck both men’s chances in 1980. That, and a Republican juggernaut named Ronald Reagan.”

While runaway inflation and American hostages in Iran hung around President Jimmy Carter’s neck to handicap his presidential re-election bid in 1980, Senator Ted Kennedy had a lingering albatross of his own—Chappaquiddick—to stunt his campaign to usurp the Democratic party’s nomination from a sitting president.

The result, says author Jon Ward in his new book Camelot’s End: Kennedy v. Carter and the Fight that Broke the Democratic Party, was that “the Democrats plunged into civil war” that eliminated any possibility of defeating the Republican challenge of Ronald Reagan.

Ward deftly traces the political histories of each man leading up to that eventful primary in 1980 that spelled, in his view, disaster for the Democrats as a party.  Few took Carter seriously when he first sought the Democratic nomination in 1976.

Ward offers an insightful look at Carter’s rise through local Georgia politics to the governor’s mansion but tells us, as Carter made his debut on the national stage, “At best, he was seen as a pawn in a scheme to rid the Democratic Party of George Wallace once and for all.” But as the world, and Kennedy, watched, Carter surprised everybody and captured the White House.

Similarly, the author traces the origins of Ted Kennedy’s ambitions, fueled by the successes of his older brothers, John and Bobby, to secure an office that he deemed his birthright. While Carter was diligent, Kennedy was more of a dilettante, riding his brothers’ coattails while dealing first with a cheating scandal at Harvard then the death of a campaign aide at Chappaquiddick. Even as he made a name for himself in the U.S. Senate, though, Kennedy continually kept his eyes on the fortunes of Carter who, at best, struggled in the White House.

Within Carter’s first year, a scandal involving his Director of the Office of Management and Budget, Bert Lance, reared its head. When Carter compounded his problems with his infamous “malaise” speech, Kennedy saw his chance to jump into the fray.

While sharing the same stage at a ceremony dedicating the John F. Kennedy Presidential Library in Boston, Kennedy remarked that his brother had taught him how to, among other things, “sail against the wind.” As the author interpreted it, “It was as if he was saying to Carter, You may have played the part of national leader for the past three years—and not every well—but I am here now, and I am of a bloodline which you know not of, and I am destined to replace you.”

Apparently determined to self-sabotage, Carter gave the “green light” for the overthrown shah of Iran to come to the United States. Two weeks later, Iranian radicals overran the U.S. embassy and took Americans hostage. As the election loomed, Carter found himself facing a coup from within his own party.

But what looked like a golden opportunity for Kennedy to appear strong, while Carter was under siege for appearing weak, slipped through his fingers when he botched the critical question during an interview with journalist Roger Mudd: “Why do you want to be president?” It turned out Kennedy didn’t really have an answer.

What followed was a dual campaign that ensured whichever man was nominated would be the candidate of a weakened, divided party unable to compete with the Republicans. The author writes that “it was a significant historical election because the coalition that Democrats had relied on for decades since FDR’s presidency—combining union members and ethnics in the big cities, poor rural voters, racial minorities, Catholics, and the South—had splintered for good.”

Though he secured his party’s nomination for a second term, Carter blamed Kennedy’s eight months of constant attacks for his ultimate defeat in the general election. In truth, Carter was likely a victim of his own making, and the turning point may well have been his October 28 debate with Reagan, at which Reagan almost pityingly repeated “There you go again” in response to Carter’s arguments.

Camelot's End thoroughly examines not just the primary campaigns of Carter and Kennedy, but also the human frailties that combined with events to wreck both men’s chances in 1980. That, and a Republican juggernaut named Ronald Reagan.