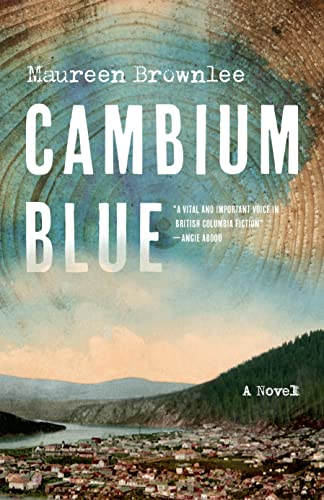 “paints the conflicts and stories that define the ordinary and memorable, finely etched with myriad details, that altogether reflect back on the readers’ essential humanity.”

“A newspaper is a town talking to itself.”

A young single mom, a widowed newspaper publisher, an aging junk collector. Cambium Blue is a story beginning in winter at 4 a.m. A woman faces down her lover, who threatens to blow her brains out in their shabby trailer home in a “crappy little mill town” called Beauty Creek, in northern British Columbia. The couple has been trying to make a home here for the past few months but then, the mill shuts down and threatens to uproot them once again. Having promised her two small girls that they would never move again, Stevie risks her life as she rebels against her partner, as if her choice to stay in Beauty Creek, her refusal to move yet again, will make any difference.

“Kurt cracked open the shotgun.” The tension of a well-wrought scene puts the reader squarely in Stevie’s court, and after she calls his bluff, she puts away the bullets, then the gun and practically pushes him out the door. Now it’s suddenly up to her to provide for her two girls. With no financial support, and no drunken binges from an unreliable man, the story sets off.

Then there’s Maggie Evans, the stubborn publisher of The Beauty Creek Chronicle, succeeding her now-deceased husband Hank. Evans’ inheritance of the paper is complicated by its precarious financial condition. But off in the near distance is news of a potential new development with the sale of the Timberline Motel. Maggie makes efforts to sell the paper, knowing she’d need the infusion of interest provided by the hoped-for development. She hires Stevie, who has recently signed up for a course in computer literacy.

Then, a cast of characters rolls out, including Beauty Creek itself: “too small, too hick, too far from everywhere and most outrageous of all, bereft of a shopping mall.”

Local details in Cambium Blue are reminiscent of small time rural British Columbia, parallel in so many ways with real life in western Canada. Beauty Creek is a company town with the mill as chief employer, and with such ideas as the Victoria-inspired “Progressive Communities Initiative” and even unsolicited junk mail from credit card companies pitching, “No interest for six months!” Brownlee creates authenticity.

In between, an expanding backstory: Stevie, before her true love Bobby died in a split-second fling over a steep embankment while he was fiddling with the bad reception on the radio; Maggie, prior to her days as Chief of the local Chronicle, when Hank, her husband reigned; and Nash’s hidden secrets, sporadically unearthed. As a rookie reporter for The Beauty Creek Chronicle, Stevie forges a bond with Nash through her careful listening, her ability to see this man who has heretofore been hidden by his memories and all the junk he collects.

As the story marches in small details toward its show down, there are questions: Will Maggie sell The Beauty Creek Chronicle? Will the new development change the town? Will Nash Malone reveal his secrets? Will the new council manage to enact their controversial by-law?

Author Maureen Brownlee creates an authentic multi-layered portrait of a small BC town teeming with oddballs, predictable citizens, and lovable grandchildren; she paints the conflicts and stories that define the ordinary and memorable, finely etched with myriad details that altogether reflect back on the readers’ essential humanity.