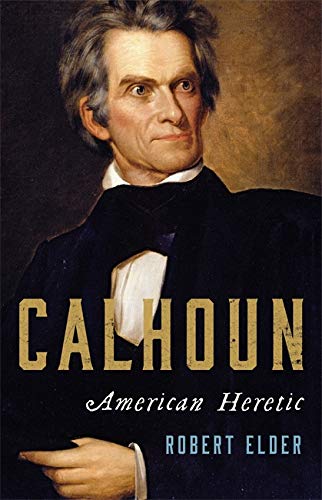 “Calhoun: American Heretic presents an unvarnished portrait of one of the nation’s most powerful political figures during the decades leading up to the Civil War.”

It is refreshing in these days of “cancel culture” and movements to erase history, to see written and published a biography of John C. Calhoun—a slaveholder, champion of slavery, and white supremacist—that is balanced and fair in its assessments of the man and his imprint on our nation’s history. Robert Elder, assistant professor of history at Baylor University, and Basic Books are to be applauded for their courage and devotion to historical truth.

Calhoun: American Heretic presents an unvarnished portrait of one of the nation’s most powerful political figures during the decades leading up to the Civil War. In his own time, Calhoun was considered one of the “titans” of the U.S. Senate alongside Daniel Webster and Henry Clay. He also served as Vice President (twice), Secretary of War, and Secretary of State.

The South Carolinian’s reputation—for good and ill—was made in the Senate, where he tried to strike a balance between states’ rights and devotion to the Union. Slavery—a moral evil that Calhoun viewed as a positive good—threatened to tear the Union apart. Elder explains that Calhoun’s commitment to preserving the Union was genuine but conditioned on the toleration of slavery.

Calhoun was born in the “backcountry” of South Carolina in 1782. British forces had been defeated at Yorktown, but the end of the War of Independence had not been formalized. Calhoun’s family at that time owned 16 slaves and more than 2000 acres of land. As a young teenager, Elder notes, John C. Calhoun was a voracious reader of history books, including Charles Rollins’ multivolume Ancient History, Voltaire’s biography of Charles XII of Sweden, and John Locke’s Essay Concerning Human Understanding.

Living on his father’s plantation, “Calhoun grew to adulthood,” Elder writes. “as he absorbed the lessons that slavery taught to young white men of the slaveholding class.” Slavery was part of the American South’s economic life and grew in importance with the onset of the “cotton revolution.”

Calhoun was educated at Rev. Moses Waddel’s Academy and Yale University. He read Cicero, Horace, Homer, Caesar, Tacitus, Polybius, and Montesquieu. He studied Greek and Latin. Politically, Elder notes, Calhoun was a Jeffersonian, and Jefferson’s ideas would heavily shape Calhoun’s political outlook for the rest of his life. Those Jeffersonian ideas included the racial inferiority of blacks and a view of federalism that held that a state had the power to declare federal laws unconstitutional—what Jefferson termed “nullification.”

Calhoun studied law at Tapping Reeve’s school in Litchfield, Connecticut. He practiced law briefly in Abbeville, South Carolina, but politics was his true calling. “The law was always a means to an end for Calhoun,” Elder explains. What he sought above all was fame—“to be remembered, to leave one’s name in the book of history.” Calhoun’s ambition, Elder writes, “was a powerful, primordial force in his life, shaping the application of his principles in ways that he rarely acknowledged to himself or to others.”

In 1808, Calhoun was elected to the state House of Representatives in South Carolina. Elder notes that Calhoun arrived in Columbia after a special session of the General Assembly enacted the compromise of 1808, which settled “the balance of representation between the upcountry and lowcountry” of the state. This example, Elder notes, informed Calhoun’s later constitutional concept of the “concurrent majority,” which argued that separate major interests in society should be able to protect themselves by the exercise of a legislative veto, and that “important legislation should be passed by consensus, rather than a majority.”

Calhoun was elected to Congress in 1810. Then-Speaker of the House Henry Clay assigned Calhoun to the Foreign Affairs Committee, where Calhoun distinguished himself in helping to prepare the nation for war against Great Britain. Calhoun’s speeches in the House gained him national fame, and he frequently clashed with Virginia’s John Randolph, a fierce opponent of the war against Britain.

Calhoun was not only a “war hawk” but also a proponent of “manifest destiny.” Like others of his generation, he believed that the United States should extend its political control from the Atlantic to the Pacific. He envisioned, writes Elder, the “nation bound together by a network of canals and roads.” He was also a strong proponent of American naval power and a believer in free trade.

President James Monroe named Calhoun Secretary of War in a star-studded cabinet that included Secretary of State John Quincy Adams. Calhoun and Adams, Elder writes, “immediately gravitated toward one another.” Adams, Elder notes, came to admire Calhoun’s “independence and intellect.” The two men would later clash over the issue of slavery.

As Secretary of War, Calhoun had to deal with General Andrew Jackson, the hero of the Battle of New Orleans who also had political ambitions. Controversy erupted in 1818, when Jackson exceeded Calhoun’s orders in Florida, but Secretary of State Adams took advantage of Jackson’s military boldness by persuading Spain to surrender Florida to the United States. Jackson and Calhoun would clash again during Jackson’s presidency over the issue of “nullification.”

Later as Secretary of State under President John Tyler, Calhoun worked for the annexation of Texas, though he later opposed the Mexican-American War. He presciently feared that President Polk’s actions in Mexico had usurped Congress’ power to declare war. “The precedent,” Calhoun stated, “is pregnant with evil [and] sets the example, which will enable all future presidents to bring about a state of things, in which Congress shall be forced, without deliberation, or reflection, to declare war . . . In a word, it divests Congress virtually of the war making power, [and] transfers it to the president.”

As the United States expanded, the issue of whether slavery should be permitted to extend to newly acquired territories came to dominate American politics. As Northern abolitionists sought to eradicate slavery, Calhoun worked with Clay and Webster to preserve the Union by political compromise—compromise that also preserved the institution of slavery.

Elder also details Calhoun’s personal life. He and his wife Floride had 10 children, three of whom died as infants. He was closest to his daughter Anna, who shared his political beliefs. They lived on a plantation called Fort Hill in Clemson, South Carolina, where he owned and worked slaves. Elder concludes that Calhoun “viewed his relationship to the people he owned through the lens of duty and obligation, as he did nearly everything else in his life.” Elder is careful to consider Calhoun’s perspectives and conduct within the historical framework of mid-19th century America, without downplaying their moral failings.

Toward the end of his life, Elder notes, Calhoun wrote A Disquisition on Government and A Discourse on the Constitution and Government of the United States. Both works were published posthumously. “Together,” Elder writes, “the two works gave full expression to the political theories that Calhoun had forged over his lifetime.”

Elder concludes that while we should not honor Calhoun, we should also not “reduce him to his defense of slavery.” Calhoun was involved as a Cabinet official or a legislator in every important political issue the United States faced from the War of 1812 to the Compromise of 1850. Elder laments the current movement to excise Calhoun’s name from buildings and to topple monuments to his memory, and warns that “we should be careful not to forget his central role in our past and, unavoidably, our present.”