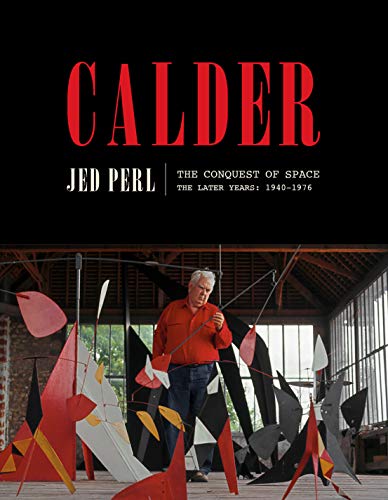 Alexander “Sandy” Calder (1898–1976) lives larger than life in Jed Perl’s Part 2 biography. As most celebrity artists have either struck a chord or hit a nerve, Calder was no exception; his sculpture was not without its critics. But Perl draws out the depth of character and personality that was Calder and spins it around in step with Calder’s inventiveness. In Calder: The Conquest of Space, we see the extent of Calder’s impact in how he continuously wooed the world, inadvertently (and almost ironically) taking a stance in the Modern Art dialogue.

Calder: The Conquest of Space: The Later Years: 1940–1976 kicks-off with a prologue set in Grand Rapids, MI, in June 1969 during the installation of a huge outdoor Calder “stabile” named La Grande Vitesse (translated as High Speed). In this essay, Perl speculates on several questions: How is it that this sculpture has a French name? How is it possible that Grand Rapids came around to picking this sculpture, from this artist? Furthermore, how is it that any city (or company, or museum for that matter) came around to picking Calder for their projects?

Inquiring minds want to know and that is what propels us to keep reading. Settling in to the first few chapters is like settling in to a seat at a Wagner opera. We dally around with Calder’s and his wife’s to’s and fro’s and then we realize there are still 500 pages to go and the weight of the book starts to make our arms stiff. Then it dawns on us: This is going to take a while to get through.

Much of Calder’s story centers on the people he lived with, entertained with, worked with, or was inspired by. He rubbed elbows with artists of all sorts and was accused of being part of various movements like Constructivism and Abstract Expressionism. Even though he avoided their methods and madness, preferring to be his own movement of one, it seems a case of being guilty of participation solely based on association. Calder, even surrounded by people, was going to be his own artist, with his own voice, speaking his own spirit.

This approach is what earned him his reputation, took him around the world, and involved him in projects that were remarkable. Because of his interaction with motion, space, mood, and sensation, Calder was drawn in to a baffling number of unusual collaborations. He worked in the theater bringing his mobiles to life through a choreographed dance performance (a dance without any dancers); he worked on a symphony performance where percussionists would drum on a huge mobile that would spin around while the musicians “played” on it; he painted the outside body of an airplane so that his work could fly through the air in a new way; and he was commissioned to create mobiles for a cathedral what would symbolize the movement of the spirit. To name just a few.

Throughout his long career he witnessed the mass commercialization of art as it unfolded from the 1950s onward and he fought to remain on the fringes of this dynamic. He preferred the customized, one-of-a-kind approach to art even though the pressure to sell out was heavy at times. Yet it’s precisely this “to thine own self be true” sensibility that makes Calder so attractive today.

Where some may criticize Calder for being too simple, others may criticize him for being too extreme, yet Calder himself settles into his Goldilocks position of it being just right for him. And that was enough to make him pleased. Isn’t that the very kernel that we look for in our artist role models? The willingness to just be themselves regardless.

And so, 500 pages and 500 illustrations later as this long story concludes, we sit with this heavy feeling that we just read an enormous amount of information about a person whose way of life was so singularly unique, who just happened to be in the middle of that grand ongoing Modern Art debate during the rebuilding of post-war America. In any other setting, Calder would have just been that old coot on the neighboring farm with a hankering to tinker in his workshop and wow the kids who made sport out of peeking inside.

Though Perl’s research is intense, the presenting of it is exhausting. Hard core biographers will revel in the nitty-gritty mundane. Be prepared here for long-winded paragraphs and some very dry fits and starts. This is an author who is clearly fascinated by sidelines and obscure quips, for whom it would be excruciatingly painful if he had to leave a single thing out. There is a sense that he needs to prove his superior Calder-trivia knowledge base. Yet should the reader power through Calder: The Conquest of Space, they will surely feel more connected to the Modern Art story as it played out in the United States and will be well versed on Calder’s role in it.