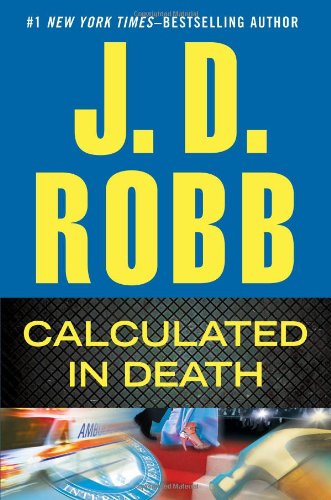 The prolific Nora Roberts under her pen name J. D. Robb offers adventure #36 in her In Death series of futuristic police procedural/romance hybrids.

One would think that after three dozen volumes a series might get stale, but not this one. Although the book is made up of the same ingredients as its predecessors, Ms. Robb mixes them into a fresh stew.

Calculated in Death opens as usual with Lieutenant Eve Dallas of the NYPD called to a crime scene then jumping into action. She rounds up her team—including the “civilian consultant,” her husband, Rourke—and each does a part in solving the crime. Eve always gets into jeopardy as she closes in on the killer, and usually gets herself out of it by wits, muscles, or firepower.

The storyline might be predictable, but its variations can go on forever. This book focuses on Eve and Rourke as a married couple. Although marriage often gets covered in mystery and crime novels, owing to the strain that a violent occupation puts on relationships, the territory is rarely explored in the romance genre. After all, the purpose of romance is to tell courtship stories that end with “happily ever after”—usually with wedding bells, actual or promised.

But Eve and Rourke courted and wed early in the series, leaving Ms. Robb with the challenge of sustaining happily-ever-after while Eve continues to solve heinous crimes and Rourke rules a business empire.

Their worlds often brush elbows and sometimes overlap into conflicts of interest that strain their marriage. How they resolve these has fueled many an episode in the series.

This time there’s no conflict between them, because the crime falls squarely into Rourke’s camp: high finance. Eve taps him to help her trace the connection between a seemingly random murder victim and a brilliant financial fraud perpetrated by a big cheese.

Three suspects quickly emerge, but the case stalls for lack of evidence. Eve’s quivering cop antennae sense that an apparent mugging is actually a contract hit, which has something to do with the fact the victim is an accountant. But her street experience ill equips her to spot the clues and avenues that will lead to a killer in the megabucks realm of white-collar crime.

Rourke, conversely, started life as a thief and reformed into a world-class financier, so he knows both sides of the equation. He steps Eve through the insider information she needs to solve the case. Much of the book covers their off-duty brainstorming over meals, in the shower, in bed, working out in their private gym, or data crunching on their home computers, until they find the patterns that will mesh into the means, motive, and opportunity that will nail the right person.

Couples who solve crimes together are nothing new in fiction. Married couples between whom the flame of passion still burns like a supernova, however, are rare. This couple has been through hell and back, both separately and together. They keep pulling each other away from the brink, pushing each other beyond their limits, while learning which simple gestures mean the most and stretching themselves for the other’s benefit.

The depth of character that has developed between Eve and Rourke may be the series’ Achilles heel. Fans who know the backstory have access to subtleties that may not be evident to new readers; and little character details and in-jokes that carry from book to book add a chuckle or meaning to those who know but will glide by those who don’t. It’s like coming in too late on a long joke or story in progress among friends. This may make new readers feel like wallflowers.

Nevertheless, Calculated in Death provides plenty for both types to appreciate. The narrative snaps, crackles, and pops with dialogue, strong secondary characters, and details of New York City in the near-ish future (2060). A fiendish crime unfolds at a steady pace. The bad guys are really bad and deserve their comeuppance, while the good guys are appealingly human and sweat hard to win the day.

Then they live to see another day of solving crimes and championing victims. Meanwhile, Eve and Rourke advance hand in hand to their next adventure in marriage.