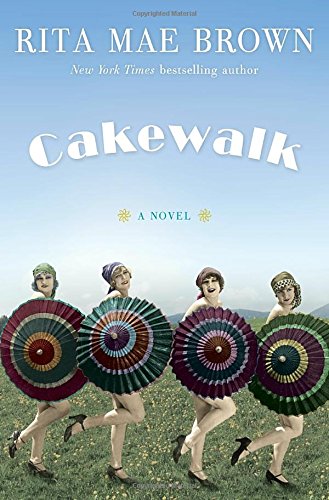 Rita Mae Brown’s latest novel Cakewalk elicits from the reader a certain WTF response. Or, more precisely, a literary variation of the question that frequent flyers in business class used to almost universally ask: Was this trip necessary?

From the beginning there are red flags aplenty that our beloved Rita Mae has sidestepped her usual glory this time out. There is, after all, this bit of advertising that sits right up front:

“Set against the backdrop of America emerging from World War I, Cakewalk provides an entertaining look at a small town straddling the Mason Dixon Line, where the townsfolk remain split between good and bad, or love and sex, or male and female, or politics and sobriety, and the inimitable, irrepressible, distinctly free-thinking Hunsenmier sisters, Louise and Julia—otherwise known as Wheezie and Juts—and their wide circle of equally indelible friends. An outrageous, affecting, and surprising story of passion, rivalry, and small town antics only Rita Mae Brown could create.”

The fact that the entire publicity department at Bantam Books apparently fixated upon the words “an entertaining look” in ramping up this book for its shot at the bestseller list makes the reader apprehensive. And the choice of such words as “outrageous” and “passion” in reference to this work in general, and the terms “irrepressible” and “inimitable” applied to its individual characters leave the reader, having read the thing, in a state mixing anger and chagrin.

Then there’s this, from a brief “Dear Reader” note that Brown has supplied as well:

“Thank you for picking up Cakewalk. Please know that this is not a plot-driven book. You will not be breathlessly turning pages to find out who killed whom, etc.”

Fair enough; one does not require murder or mayhem in order to have a good time. But still. Shouldn’t something or other leave the reader feeling a little asthmatic, if not altogether breathless?

And shouldn’t a novel, of all books, be at least a little “plot-driven?”

“Cakewalk is you and I sitting out back watching the sun set behind the Blue Ridge Mountains, horses grazing in emerald fields, hounds asleep at our feet and far, far too many cats imperiously surveying all.”

Which, once the reader stops screaming, “You and me, you and me. Not ‘you and I!’” sounds pretty good.

This intro nicely sets the stage by saying that our author is, in her new work, “recalling stories told to me by mother, my aunts, Dad, his brother, and uncles when I was seven, eight.  Stories about people then in their sixties, seventies, eighties, and even a few in their nineties, stories about my people . . . Often, the storyteller, bourbon and branch in hand, added flourishes.”

Again, sounds pretty great. But perhaps it might have been better to reveal to newcomers that Cakewalk belongs to an ongoing series of books, which, grouped together, is called the Runnymede Series, as all are set in the fictional little town of Runnymede, which sides right on the Mason Dixon Line, so that one side of the town sits in the North, with all the politics and fussing and feuding that that suggests, while the other sits in the South, and a strikingly, almost overwhelmingly “Why, Miss Melanie,” version of the South it is.

And given that, in setting Cakewalk in the years just after World War I, the memory of the Civil War is none too distant and the wounds of that war very much underlie those of the larger conflict that has just finished, Rita Mae Brown, while not promising a page-turner, does seem to be promising something more than just an historical pageant. The town is, after all, situated to be rather full of strife.

And while Cakewalk is the latest novel in the Runnymede Series, it is, chronologically, set early on in the saga, making it sort of a prequel to what has already been written. (The series began about a generation ago, in the last waning moments of the century before this one, with the vastly superior Six of One, which is to be highly recommended to those wanting to become acquainted with Rita Mae Brown.) Which can be confusing to the newcomer. And can leave the reader whose first Runnymede book is Cakewalk, not understanding that two such dull characters as Wheezie and Juts are given so much time and attention. (It pays off later, in other books, but certainly not here.)

In short, Cakewalk is the sort of novel in which the titular mannered ambulation seems like an afterthought.

And the reader is left wanting more cake.

Still, even with no dead bodies and no explosions, there is a fire in a chapel, and there are meet-cutes, and characters with fluid sexuality, and rich people and noble hard-working poor people who work for the rich people.  And women named “Dimps” and (her daughter) “Dimps, Jr.” And the beautiful, rich Celeste, who is sort of the town lesbian, until her brother impregnates and then marries the girl she loves, leaving the beautiful, rich Celeste all alone for a few pages until she meets Ben, with whom she forms a celestial relationship.

And, at the end of it all, after even the cakewalk has been undertaken (too much walking, too little cake if you ask me, but still . . .), Rita Mae Brown again addresses her reader with some of the best writing in the book:

“Tendrils of gold flare out from behind the Blue Ridge Mountains. The sun has just set. The cumulus clouds will shortly turn to molten copper, scarlet, then deep pink, finally lavender—perfect timing for I have now finished Cakewalk . . .

“The sky is blood red now. Even if one is burdened with sorrow, heavy responsibilities, it is impossible not to be uplifted by such majesty.

“Maybe love is an interior sunset.”

As lovely a thought as that last sentence conveys, Cakewalk does not rank among Ms. Brown’s best. It is, as she promises, a lackadaisical thing. A sweet enough book, but one in which it seems as if the sentences evaporate as soon as you read them. It is a book best left to the Runnymede completists. The rest of us may find that, after getting a book or two into the Runnymede saga, our understanding of the town and its characters will then and there suffice.