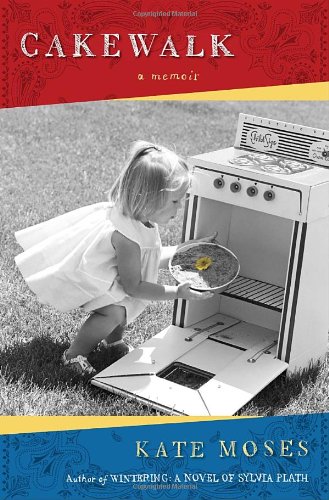 “The byproduct of suffering, if you’re lucky, is appreciation. . . .
My windfall has always been a sweet tooth, the gold watch that
deflected the bullet aimed straight at my heart.”

I was more than 50 pages into reading Cakewalk before I realized that this is a nonfiction memoir. At the start it reads like a novel that might have been written by Anne Tyler or Anna Quindlen, although I should have taken a clue from its overly upbeat nature: “Mom, did you know the words ‘treat’ and ‘threat’ are separated by just one letter?” But the tone soon shifted.

Kate Moses was in first grade in 1969, and this retelling of her life story reads like a memorial to an earlier time: the 1950s. It’s made all the more interesting by the fact that Moses grew up living in several places including Palo Alto, Petaluma, Sonoma, outside of Philadelphia (where the Main Line ended), Virginia, and Fairbanks, Alaska. She also had relatives in San Francisco and Dayton, Ohio (“. . . along every road in Ohio the corn stood high as an elephant’s eye.”).

This initially appears to be an ode to food, the many treats and meals that an overweight young girl took while growing up. She sees a cross-country trip as “an opportunity for reunion with Howard Johnson’s coconut cake.” And she “spent every cent I was given on candy and pink Hostess Sno Balls.” The impression that this is all about food is given further credence by the recipe that concludes each chapter. Yet the food talk is just a cover.

This memoir is, to a great extent, about the pain of growing up. Moses’ parents had an extremely unhappy marriage. Her father was an overly serious man, and her mother was fun-loving. It did not make for a good mix. One fault with the telling is that Moses makes a few too many negative references to her father. He was “a rigid bullying husband . . .” and a violent father who caught his wife in “the stranglehold of . . . marriage” due to his “brutalizing domination.” The reader gets the point after the first couple of references.
This brings up the issue of editing. All in all, this is an entertaining read, but not so much that the typical reader will want to stick with it for all of 368 pages. It could easily have been shortened by a quarter to a third of its length.

“It was the year we started waiting for McLean Stevenson . . .”

Still there are some very entertaining stories included in Cakewalk, some of which prove the adage that truth is stranger than fiction. Kate’s mother fantasizes about being rescued by the TV actor McLean Stevenson, and she eventually is arrested—rather, detained—while visiting the White House after being caught taking something from Patricia Nixon’s bathroom!

Further, if you absolutely love food more than life itself there are plenty of intriguing descriptions here of meals and snacks. In fact, this autobiography is full of tales of food consumption. The word gorging comes to mind. Then there are the recipes to try out. The one for chocolate chip cookies is a must.