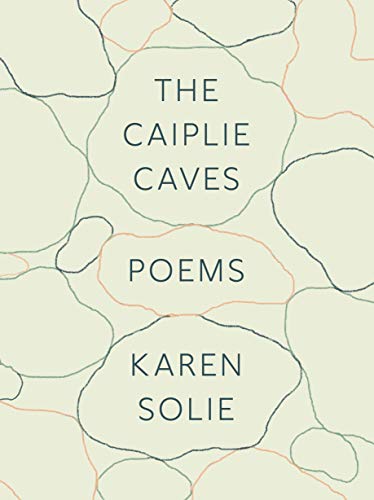 “Solie's poetry is as refreshing as are the words of lovers who meet for the first time and etch their hearts in the stone of the Caiplie caves.”

By way of The Caiplie Caves, Karen Solie is emerging as an international academic poet. Born and raised in Saskatchewan, Canada, Solie is writing poems about people, places, and events in other times, other countries. The Caiplie caves of Scotland were excavated in the 19th century upon the discovery of the 4000 years old human remains. The caves, modest in size and range, overlooking the Isle of May in the North Sea, first attracted Christian hermits, most notably Ethernan, a quasi-mythical Irish/Scottish holy man in the seventh century; now, they draw sightseers and poets.

International poetry synthesizes sensibilities of various cultures, landscapes, and histories. For readers, Saskatchewan and Scotland are unrelated parts of the Anglo world. The history of Saskatchewan might be as ancient and mystical as that of Scotland. Land-locked Saskatchewan with vast grasslands and open-pit coal mines has little in common with the Caiplie caves that the North Sea waves patiently chiseled into existence. That a Canadian farmhand, Solie, would grow to celebrate, in verse, the history of Scotland infuses international poetry with fabulous promise.

By definition, international poetry is academic poetry that requires the readers to learn unfamiliar places, persons, and events to appreciate the poems fully. International poetry, much like other academic writings, might be cast away as opaque or stressful unless the reader knows or is willing to research the backstory as the poet does. In many ways, writing international poetry is a complex genre that requires cross-cultural expertise and poetic courage. "Experience teaches, but its lessons/may be useless." Solie bravely accepts the challenge of visiting new experiences and mastering new materials in composing the Caiplie poems.

Except for few, the Caiplie poems demand some grasp of history wrought into the text. Even the readers in Scotland familiar with the caves might need some digging in local history to cherish the poems about their national marker. Solie furnishes a short Preface and scholarly notes at the end of the book, laying out a few core facts about the caves and the hermit, and the lines she borrowed from other sources. Canadians, Americans, and others might opt to read the Caiplie poems more generally, getting whatever they can out of them.

Despite their geo-historical settings, most Caiplie poems are accessible to general readers. Solie does not write in obscure words. Her style is almost lyrical, though placed under the heft of quaint history. "In search of a hermitage/men and women, mostly men/in rags overworn with larger rags" refers to Christian hermits in the Caiplie caves. Still, the lines apply beautifully to describe Indian fakirs and American hippies. "But I go to sleep trusting/my damaged face will be restored as a sign/of love." Here, the reader is free to associate the healing love with Jesus, Augustine, Pope Gregory, St. Pancras, or any other intercessor mentioned in the poems.

The Caiplie poems carry metaphysical streaks, and Solie demonstrates an urge for philosophizing events, observations, and phenomena. "Can a person be trusted whose principles forbid despair?" "A pilot light flickers like an awareness of self." "You can live here but don't expect it to entertain you." Each such line has autonomous meaning, even though its implications are multilayered in the context of the poem.

A few poems engage in conversations with Paul, the apostle. "Paul, I literally see through you/but you don't frighten me anymore, for I have looked into myself." "Paul, where have you gone?" "How long have I been sleeping, Paul?"

Then there are poetic fragments scattered throughout the poems, which captivate the readers. The reader pauses and searches for meaning though it's unclear whether the fragment has any meaning in the poem, or any meaning anywhere. The fragments refuse to surrender to the captivated mind. Consider "Nothing exists in the darkness that doesn't exist in the light." Or, "The dogs we don't have must be unleashed," or "What is the self/but that which fights the cold?" These fragments are not devoid of meaning, but their poetic effect endures independently of any rational comprehension.

The Caiplie Caves offers subdued poetry. "I like it at sea level." The words, the ideas, the passion, everything about the poems is subdued, understated, reserved, except for the "fuck” derivatives sprinkled here and there, which, too, produce little commotion. "In this territory/also known as Fuck You. Your home town/is now my home town." "The sea is neither animal/nor god. Won't be tamed or appeased." "I wanted an answer, not a choice, it's too late in life."

Poem after poem, line after line, the words flow with unpretentious sobriety. "one's self is not a well from which to draw endlessly." The poems host no emotional roller coasters, no rides, no swings, no drinking or kissing or lovemaking. There's nothing shocking (impious) to jolt the readers out of their emotive homeostasis. "My love (a tenant) . . ./sweeps droppings/from the paved deck like an owner with his whole heart."

"When I woke, my throat was raw, as if I'd shouted all night, or sung/Which I might have done, I don't remember, I was so high." Here, "high" does not necessarily mean intoxication.

A few lines in the poems express anti-capitalist ethos. "This performance of ‘I Want My Fucking Money’/broadcast live from the street will conclude/when the last human being on earth/has perished." "The robin never flew again,/bound as it was to Kentigern by debt." A few lines protest the harvesting of trees from the forest. "I saw trees turn into ships, and sail away." A few lines remonstrate climate change. "How can he sleep in such cold/Face up or face down/In sheets of fuel/The unbreathable aftermath."

For nutrition-conscious readers, there are "sugar" lines embedded in the Caiplie poems. "Are they converting/sugars of their loneliness/to conviction?" Gnawing on donuts in downtimes of nervousness, no reader would resent the cautionary note "but I'm afraid I'm not good/ for anything right now/feasting on simple sugars of my indecision. . . ."

Solie writes first-rate poetry, clean of clichés, free of thickheaded imagery, demonstrating good heartedness, reveling in diluted mysticism, drawing on inconsequential stories from the shores of Scotland. Most humans lead lives in the daily hustle and bustle, far away from any hermitage. The Caiplie caves are ordinary rocks, not as renowned as the Stonehenge. Still, Solie's poetry is as refreshing as are the words of lovers who meet for the first time and etch their hearts in the stone of the Caiplie caves.