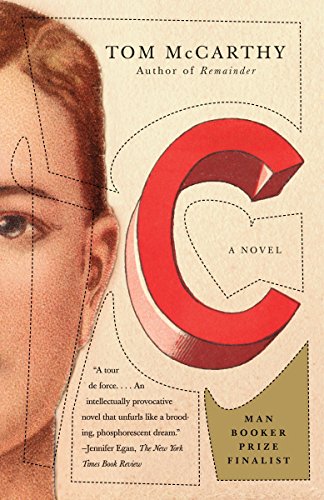 Already short-listed for the 2010 Man Booker Prize, Tom McCarthy’s new novel C is rightly deserving of the highest accolades, both on and off the literary podium.

With its dazzling scope, intellectual rigor, page-turning narrative, and intricate symbolism, the book contains rewards of unusual value for virtually every reader. As long as you’re willing to forgive the occasional rhapsodic descriptions of the components of an early radio or the cryptographic (i.e. cryptic) incantations of ancient civilizations, trust in McCarthy’s astonishing skills to lead you on a fabulous ride.

Tracing a plot summary for a novel this rich would be to do both writer and audience a disservice. Here is an incomplete list of the subjects addressed: electromagnetism and the occult; Morse code and sign language; the mechanics of human speech and of flying machines; literal and metaphoric archaeology; the slaughter of young men in the Great War; and chemistry and physics experiments pre-figuring the scientific curiosity that led eventually to Hiroshima.

Included also are questions of faith and its loss, love and its uncoupling, the places where ancient and modern worlds collide. McCarthy invites his readers to consider the Middle East when it was still part of the British Empire, with the desert as a vast “undiscovered” map, both above and below the surface. Listen for the permutations of a single sound, the letter C and its place in the chemical and alchemical alphabet. Have you had enough yet? How about careening through the abstract adventures of naming, codifying, comprehending, deciphering, rearranging, and disappearing?

The breadth and depth of Tom McCarthy’s vivid imagination and esoteric curiosity, the abundant gifts of prose style and wit, the timelessness and authenticity of characterization—all of these make this book a treasure trove.

Whether you are intrigued by epic portraits of a WWI pilot, a cocaine and heroin addict, a spy (in fact, this is the all-in-one protagonist Serge Carrefax), landscapes as diverse as England and Egypt, or the way the age of wireless communication at the turn of the 20th century brilliantly foreshadows our own contemporary wireless age, you will find countless marvels and illuminations within these pages.