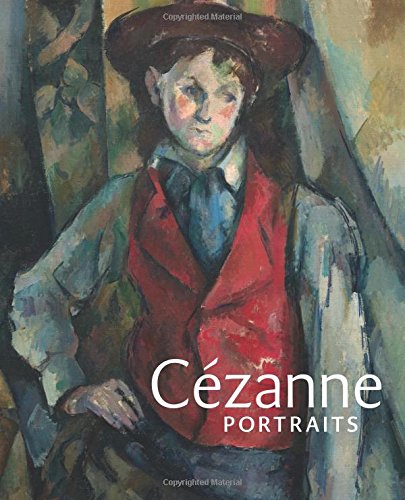 “Cézanne Portraits by John Elderfield is an exquisite book based on the exhibition . . .”

What we most often see reproduced as Paul Cézanne’s finest works, i.e., his still life's and landscapes, represents the high achievement of years of work and a maturation of style which share a wonderful vitality of form and color.

But the way that Cézanne approached landscapes, by exploring their structural and faceted qualities, is very similar to the way he handled portraiture. Cézanne Portraits by John Elderfield is a fascinating exploration of who Cézanne was, his artistic and personal roots, the effect of his relationships in painting portraits, and why the appearance of his work is a complete reflection of Cézanne’s persona.

Cézanne set himself apart from the Impressionists and other Post-Impressionists with an almost “sculptural” approach to landscape painting, as exemplified in his Mont Ste-Victoire (1904–06) landscape.

He was a native of a provincial area, Aix-en-Provence, in the south of France, far from Paris. Paris in the 1860s, was considered a cultural hub and the “in” place to be for up-and-coming painters, writers, etc. And at the age of 22, Cézanne decided to leave law school, against his father’s wishes, and with the encouragement of his close friend Émile Zola, departed Aix-en-Provence for Paris to further his aspirations as a painter.

The immensely talented young Impressionists: Monet, Renoir, Sisley, Manet, Degas, etc., were on the cutting-edge of painting, and although Cézanne got along with them well enough, his social relations with them were inept, and he was often seen as rude, shy, and depressed. All of which often led to Cézanne’s traveling back to his province where he felt at home.

However, Cézanne’s fascination with the phenomena of seeing and the quality of what is visible was stimulated by the luminous work of the Impressionists and with the work of Courbet, who believed that painters should portray life around them. It was Courbet who with his painting A Burial at Ornans (1849) and its realism, had been accused of a “deliberate pursuit of ugliness.”

It was during such a period in 1866–67 that Cézanne experienced a breakthrough with his portraits. The palette knife portraits of which his uncle Dominique Aubert was often the subject, are characterized by vigorous broad swaths of streaked color. The brute forcefulness of the palette paintings exhibit a dynamic that is extremely engaging and adds a compelling quality to the portraits.

However, contrary to the assumption that they exhibit a crude lack of sophistication what is evident is that, “heavy, wet patches of paint simply cannot be applied by knife to a picture surface in a violent manner without breaking the skin of the previously applied patches . . . these paintings have been built up step by step from flat, rarely blended slabs of pigment . . . with deliberation . . .” (Elderfield).

His return to brush painting in 1867 exhibits a greater sophistication and assuredness in his handling of the brush, and achieves considerable subtlety in defining the surfaces of sitter and background.

Cézanne had succeeded in finding his own voice away from the Impressionists and often chose to work in the south of France, in isolation away from the spotlight of Paris.

Interestingly, although Cézanne painted dozens of portraits, his fascination with the sculptural quality of form, whether it be of fruit, a torso, or a mountain, is unwavering, and becomes more evident over time. His many portraits of his wife, Madame Cézanne, manifest a dimensionality of form that would go on to inspire Braque and Picasso in their cubist quest, as well as provide a rare glimpse into how an artist expands his mastery of a medium.

The astoundingly beautiful color reproduction of Cézanne’s work on semi-matte heavy weight paper is exceptional. One thing that makes the reproduction in this book notable is that although the color is rich and nuanced it avoids excessive saturation and contrast. The semi-matte paper provides an excellent medium for the work to be viewed clearly and without glare.

Cézanne Portraits by John Elderfield is an exquisite book based on the exhibition that took place at the Musée d’Orsay in Paris and will exhibit in the coming months of 2018 in London and Washington D.C. John Elderfield is chief curator emeritus of painting and sculpture at the Museum of Modern Art.