The Butterfly Girl: A Novel 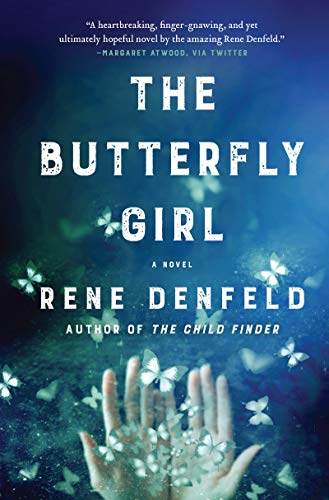 “Sympathy for Celia and a curiosity about children trapped in bunkers with psychopaths keeps the heart of this novel beating . . .”

Rene Denfeld has followed up her highly praised novel The Child Finder with The Butterfly Girl, a thriller with a social conscience. The book opens with Celia, a 12-year-old street kid who watches everything in her world with suspicion because her life and survival depends on it. She notices a house that seems abandoned, but also discerns that it is “a bad place.” She catches the gaze of eyes looking out from inside.

The reader then meets Naomi, a detective of sorts who is instinctively talented at finding lost children, but who has temporarily retired to keep a promise to herself to find her own sister, who went missing when Naomi escaped her captor in a bunker. Both Celia and Naomi share a history of abuse as children, but Naomi remembers very little.

In spite of the impossibility of her situation with almost no information, as she doesn’t even remember the face or the name of the sister she loves, Naomi is determined to find her. She has scant images of her escape from captivity in a bunker in an Oregon Valley farm, but her memories are buried deep in the trauma, and are inaccessible. Naomi instinctively believes that her sister, who was also captive in the bunker, is still alive.

In Portland, Naomi learns about the elusive Green River Killer, who murdered at least 75 women and dumped their bodies in the river. Most were street kids, like Celia, searching for food, companionship and money to eke out their scruffy existence on the streets.

The novel follows the activities of Celia and Naomi as their paths cross more and more while Naomi scours the streets for clues to find her sister. Naomi is lured into the hunt for the serial killer when more and more street kids, girls like Celia, float to the surface of the river.

The reader encounters Celia in the warm library, a place of refuge and safety during the day, where she drifts off into visions of her butterflies—imagined guardians who console her depressing and almost hopeless existence.

Naomi, who has a warm home and a loving husband, is conflicted by her gradual bond with Celia. With street kids continuing to be discovered in the river, and as Celia seems increasingly vulnerable, the reader wonders why Naomi doesn’t just take the waif into her world and save her from the many dangers and difficult life on the street. Both Naomi and Celia have best buddies alongside them who advocate for them and look out for them in their complicated and stressful lives. It isn’t until Celia has been lured into the path of the serial killer that Naomi comes to her senses and puts the pieces of the puzzle together, pieces that have been unfolding in plain sight since she arrived in Portland.

Sympathy for Celia and a curiosity about children trapped in bunkers with psychopaths keeps the heart of this novel beating as does the promise of hope for Celia in her connection with Naomi. A snapshot of the reality of street life and the causes of homelessness are well etched. The novel begins and ends with the “bad place” as all the details of the connections between the two female protagonists come together in a suspenseful climax.

Bestselling author Rene Denfeld was herself a journalist, a licensed investigator, working with many victims of sex trafficking innocents in prison. She is also a foster mother who regularly speaks on issues relating to social justice, crime, and potential solutions. In 2017 Denfeld was awarded a Breaking the Silence Award for her advocacy for victims. The New York Times named her a hero of the year. She writes about this subject close to her heart with confidence and detail.