The Butterfly Conspiracy: A Merriweather and Royston Mystery 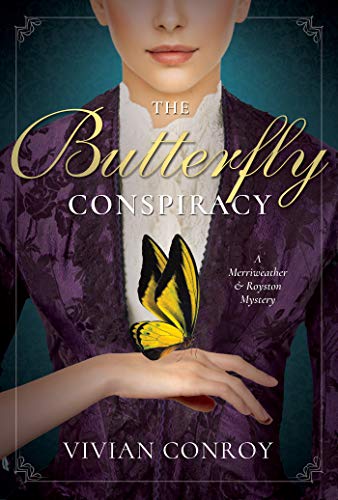 “The idea at the story’s core—death by butterfly—is fascinating from start to finish.”

Historical fiction is always about characters in relation to their time. In this first of a new series, the time is late Victorian era (date never specified) in England, when extreme class divisions were being complicated by discoveries in science.

Given what we know today about chemistry, biology, and technology—especially forensics, it’s hard to imagine how law enforcement teams investigated (and prosecuted) crimes with any degree of success back then. This novel focuses on that issue, placing its characters at the cusp between knowledge and ignorance, where the difference decides whether an innocent man gets hanged.

It’s up to Merula Merriweather to find the right information, because her uncle is doomed if she does not. She was raised by him and her aunt among the aristocracy, but she has never accepted the role laid out for her as female. She’s much more interested in zoology than nabbing a rich husband.

But since ladies are not allowed to have intellectual interests and education, she hides her research behind her titled uncle’s facade and presents her results in his name. He allows this, as he is a kind and generous man, and for her sake he feigns having knowledge at the Royal Zoological Society to help advance scientific inquiry.

One night they attend a presentation at the Society, and Merula brings her newly hatched exotic butterfly to prove to the skeptical that such a beautiful thing really does transform from a lowly caterpillar. Everyone believes the giant insect belongs to her uncle—who promptly gets accused of murder when Merula releases the butterfly to show it’s alive, not just a bundle of papers and flowers, and it lands on an important lady’s arm. The woman drops dead of obvious poisoning symptoms—and then, as the saying goes, all hell breaks loose.

Merula is snatched to safety by Lord Raven Royston, a failed inventor, before anyone can connect her to the debacle. He alone recognizes that the butterfly could not have poisoned the lady, and the potential consequences of the panic induced by the event. The only way to prove Merula’s uncle did not arrange the death-by-butterfly is to prove somebody else did.

But there’s no science to support their claims; and the power of accusation by VIPs, supported by media sensation, outweighs investigative questioning by the relatively powerless police.

Merula and Royston must become amateur sleuths to clear her uncle’s name. This is hard to do while they are in hiding. Royston, fortunately, comes equipped with eccentric friends who do most of the legwork, while he and Merula sort through the meager facts and many suppositions to find the truth behind the crime.

Their relationship seems ripe for romance, but the story stays focused on sleuthing. Readers can probably assume something will develop between them as the series progresses. Both have shrouded, painful pasts, and their sudden forced companionship leads them to reveal emotions and secrets. While these are first steps toward intimacy, their relationship holds at friendship in this first volume, even though its tone feels a lot like a historical romance.

The need to elude the police keeps the narrative slow, because Merula and Royce spend more time thinking and talking, and recapping, rather than doing. That makes the mystery more of an intellectual puzzle than a dangerous caper, decorated with period details about clothing, grand houses, and horse-drawn transportation, along with the mores and manners of the rich and poor and rising middle class.

The idea at the story’s core—death by butterfly—is fascinating from start to finish. Wondering how Merula and Royston are going to save her uncle in the face of such obstinate ignorance among the powers stacked against them keeps readers turning pages to the surprising end.