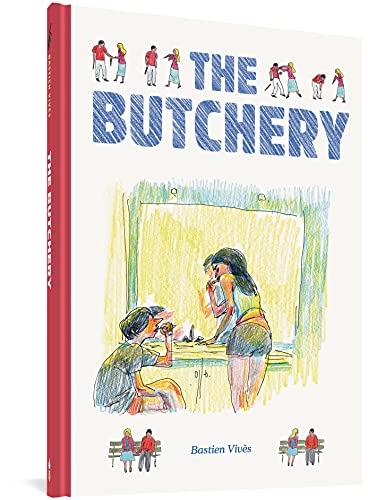 Through a series of scenes and very few words, Bastien Vives conveys the sweetness of intimacy and the sharp pains it brings. The lovers in these pages dance around each other, both literally and figuratively, trying to find a rhythm that works. When it does, it’s only for a brief instant to be followed by misunderstandings and silent recriminations. Vives does a beautiful job of choosing the pictorial style that fits the mood he wants for each vignette. The drawing can be crisp, with clear demarcations separating the couple. It’s softer as they cling together, their edges sometimes blurred.

One spread early in the book presents a jarring departure from the scenes of romantic love. On the left side, soldiers wait in a plane to parachute out for a combat mission, the colors dull grays, greens, and blues. The opposite page shows the soldiers in a bright red background, about to parachute out with only one bit of dialogue: “Watch your back, though. You could get butchered down there.”

And now we understand the odd title to the book, The Butchery. It could have been an odd translation from the original French, but there’s nothing to indicate the original title. Butchery isn’t a commonly used English word. The war scene provides us the necessary context. The soldier is a stand-in for the lovers who are about to take a leap of faith and trust another person. It won’t end well.

The slaughter is emotional and the warning before the parachute jump applies not to war, but to love. If the following pages provide a back-and-forth tugging, now warm romantic glow, now hesitant eagerness, now despair, the theme is clear. The old adage says that war is hell. Vives is saying that love is; that despite the illusions of connection, it’s brutal, more slicing pain than ecstatic pleasure.

It’s a strange, bittersweet book, much more bitter than sweet. The pleasure comes not from the story being told but from the telling of it. We revel in the skillful drawing with exquisite pacing, the emotional force packed into the sparest of lines. Vives is a masterful artist, and this book could be used as a textbook for how visual storytelling works. How does he convey so much mood with so little information? He picks the details that matters most and by doing so connects us closely to his lovers and the pain they inflict on each other.