The Butcher's Daughter: A Novel 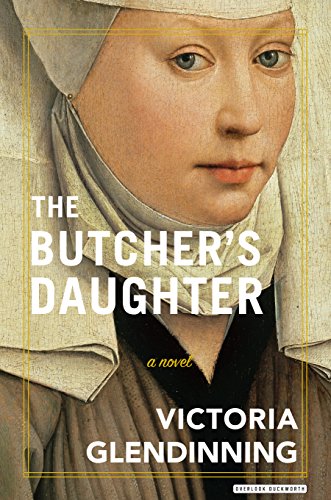 Victoria Glendinning’s historical novel, The Butcher’s Daughter, offers a richly textured chronicle set in Tudor England where the shifting religious and political alliances surrounding Henry VIII’s court become a backdrop for the trials and challenges that Agnes Peppin and her cloistered sisters face when a royal edict commands the destruction of Shaftesbury Abbey.

Women living in the abbey, many into old age, are thrown out of their religious retreat to fend for themselves in a society marked by abject poverty and sadistic violence. The novel that chronicles the human cost of Henry’s edict is well written with wonderfully rendered descriptions of place and period and an evocative mix of fiction and fact.

Agnes Peppin’s struggle to survive is recalled more than a decade after the events that she relates in a first-person voice at once immediate and intimate. The author often varies the tense of Agnes’ narrative voice which is perfectly fine so long as those shifts are consistent with the frame the author constructs, though in some cases the author describes elements of the story as having happened “yesterday” or at some remove “ago” which in fact occurred years earlier than Agnes’s first-person report.

Recalling her arrival at Shaftesbury Abbey, for example, Agnes relates that "Once there were a hundred and twenty nuns living here. Including myself, there are now only fifty-seven." In fact, at the time of Agnes’s narration, the abbey has long been razed and no nun has lived on the site for more than a decade. These sorts of gaffes can mislead readers about basic plot-points in the narrative.

Agnes’s first sexual encounter with a boy, Peter Mompesson, leads to a pregnancy that sends her to the abbey some time before 1539. "I saw Peter Mompesson only once more, in November," Agnes narrates, when in fact readers will learn that Agnes is reunited with the father of her son in a relationship that is ongoing and contemporaneous with her chronicle of past events.

These lapses are not serious enough to diminish prose and dialogue that are otherwise fresh, full, and authentic. The author has created an interesting and observant narrator whose actions and reflections are in the main consistent with her circumstances and the period in which the story takes place.

That does not mean that Agnes’s first-person reports are always credible. When narrating the experience of being sexually assaulted by a truly vile character, for example, Agnes reports that the perpetrator’s "heaving lust was disagreeable . . . but his hand was skilled. The body is witless and mine was wilting . . .” It’s hard to imagine a woman in any era subjected to this kind of violation who would endorse Agnes’s description.

Nearly all of the other sexual encounters that ensue, with women as well as men, are casual or opportunistic. The exception comes in Agnes's affair with the historically-based Sir Thomas Wyatt,". . . my love, my Tom . . .", a doomed rebel whom Agnes meets while employed at a brothel. "He wore a black tunic with no collar or lace, from which his neck rose like the trunk of a tree, sun-browned and muscular."

The setting and scene tease like any bodice ripper. "Pleasure! Pleasure! Pleasure!" the married man defines the terms of their engagement in a moment of passion that Agnes either ignores or misinterprets. “I asked him whether I could not go to live quietly in some remote place . . . and we could make a good life together."  For raising that possibility, Agnes’s well-heeled lover bursts into a "wordless male rage" and strikes Agnes "across the face." "It was a terrible mistake," Agnes blames herself for that abuse and remains Wyatt's faithful paramour.

The pattern of Agnes’s dependence on men and her response to Thomas Wyatt is not used to justify the social mores of the 16th century, but in the main her decisions and reflections do reflect those attitudes. With Wyatt’s execution, Agnes determines to reunite with her long-absent and one-time lover who is also the father of her son. Agnes has no illusions about her motivation in this quest. "Did I still care about Peter Mompesson?" Agnes poses the question. "No, I still did not." And what of her son Peterkin? Readers will pour over Agnes' answer to that question for themselves.

Glendinning creates a raft of supporting characters who respond to the shock of dislocation and the prospect of poverty, disease, and death in a variety of ways. A few nuns from the abbey have family connections on which they hope to depend. At least one woman without that safety net commits suicide. At one point, Agnes agrees that the only people women can depend on are other women, but in fact a woman from her own abbey betrays Agnes, destroying the one talisman that establishes the narrator’s distant link to aristocracy and a hope for rescue.

With each episode in Agnes’ journey, the author deepens a malleable canvas of reactions to the edict that punished thousands of women and men formerly confined in religious life, but Agnes Peppin's rock-bottom motivation is to survive.  She endures many trials to find Peter Mompesson, and is glad to find his circumstances much better than expected. "I shall take care of you," Peter tells Agnes, and the narrator is content to find that security. In a world ruled by men cowed before a fickle tyrant, Agnes’s decisions are not only pragmatic but authentic to her time and place which, after all, has to be the guiding principle for historically based fiction.

Award-winning author Darryl Wimberley is known for both literary works and novels noir set along the Gulf Coast of Florida’s Big Bend, the latest title, Post Facto, to be published by The Permanent Press, December 2018.