Buses Are a Comin': Memoir of a Freedom Rider 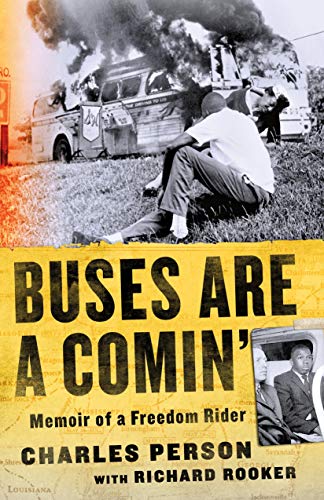 “Buses Are a Comin’ offers more than a tribute to the Freedom Riders and other activists who put their lives on the line in the face of segregationist massive resistance and stirred the youngest among them, Charles Person, to do likewise. It also aims to teach and inspire a generation just joining the struggle, in a time when the work of the Freedom Movement remains undeniably unfinished.”

The stark black-and-white image on the cover of Charles Person’s Buses Are a Comin’: Memoir of a Freedom Rider, depicts gasping riders fleeing a burning Greyhound bus. The picture was taken minutes after members of the Ku Klux Klan and other rabid local white supremacists had bombed the bus a few miles outside of Anniston, Alabama, on Mother’s Day, 1961.

The target of these homegrown terrorists was a handful of Black and white Freedom Riders, volunteers in a Congress of Racial Equality (CORE) project designed to test compliance with two Supreme Court decisions outlawing segregated interstate bus travel throughout the South, and committed to maintaining nonviolent discipline, no matter how violent the resistance they encountered.

Person, an 18-year-old Morehouse College freshman and the youngest of the first-wave Freedom Riders, wasn’t on the burning bus. At roughly the same time the Greyhound bus was bombed, Person found himself literally at the bottom of a pile of bodies pummeled and dumped in the back row of a Trailways bus by white thugs as the bus traveled the same Anniston-to-Birmingham route. Even more savage beatings awaited this team of Freedom Riders at the station in Birmingham, where notorious Commissioner of Public Safety Eugene “Bull” Connor had promised the Klan 15 minutes to administer crippling Jim Crow retribution to the Freedom Riders and the journalists riding with them before police would arrive on the scene to intervene.

Person’s searing, revelatory, and often-inspiring memoir provides a clear, vivid, and eloquent account of the first segment of the pivotal 1961 Freedom Rides, as experienced by its youngest participant and one of its few remaining survivors. It instructively captures the Riders’ travails to the point where the battered first group found themselves unable to push on and were forced to fly to New Orleans and cede the struggle to reinforcements from Nashville.

Person’s account offers a fine complement to existing literature on the Rides, including the broader views of the project provided in Raymond Arsenault’s Freedom Riders: 1961 and the Struggle for Racial Justice, which delves more deeply into the political climate surrounding the Rides and the Kennedy justice department’s sluggish, indifferent, and woefully inadequate response; and Derek Charles Catsam’s Freedom’s Main Line: The Journey of Reconciliation and the Freedom Rides, which thoroughly documents the 1961 Freedom Rides and their direct antecedent, the 1947 Journey of Reconciliation, also organized by CORE. The Journey of Reconciliation provided a template for the 1961 Rides, but made no attempt to penetrate the Deep South, and as a result—in the words of Freedom Rider and future Student Nonviolent Coordinating Committee (SNCC) chairman and Georgia congressman John Lewis—proved “more symbol than substance.”

Person’s memoir also makes a fascinating companion volume to Freedom Ride, the 1962 memoir by Person’s white seatmate, James Peck, a Harvard-educated, longtime CORE member and Journey of Reconciliation veteran and committed pacifist, who attempted to shield Person during the Mother’s Day white riot, emerging even more beaten and bloodied than Person himself. Peck’s book is not as personal as Buses Are A Comin’, offering more of a capsule history of CORE initiatives of the 1950s bookended by his first-hand accounts of the bus-travel initiatives than a personal memoir, but Peck’s and Person’s books converge at precisely the same terrifying point in space and time.

Buses Are a Comin’ charts Person’s fascinating journey to the Freedom Rides, through his upbringing in a cramped tenement in Atlanta’s “Buttermilk Bottom,” his eye-opening experiences as a pinboy at a segregated bowling alley, and the point at which, over his mother’s objections, Person’s father, convinced that their son was taking up “our fight,” agreed to let Charles join the Freedom Ride.

Person does a terrific job of contextualizing the Freedom Rides in the arc of the Freedom Movement and his own life by describing his activist baptism in the Atlanta Student Movement, a broad-based and disciplined assault on systemic segregation in “The City Too Busy to Hate,” led by Morehouse student Lonnie King and future SNCC communications director and Georgia congressman Julian Bond, and Spelman student Roslyn Pope. Pope drafted the lion’s share of the Atlanta students’ manifesto, “An Appeal for Human Rights,” which was widely circulated in Atlanta newspapers, and became a founding document of the student wing of the Freedom Movement that fired Person’s passion for political action.

Person delivers a stirring account of the local movement’s inception in February 1960, when Lonnie King and Julian Bond met up at a downtown drugstore with a popular Black student hangout in its back room. King asked Bond if he’d heard about the February 1, 1960, student sit-in at a Greensboro, North Carolina, lunch counter. Bond replied in the affirmative and suggested that someone should try something similar in Atlanta. King replied, “It’s going to be us.”

“That one sentence started the Atlanta Student Movement,” Person writes. “For me, there would be no student activism, no arrest, no jail, no solitary confinement, no Freedom Ride, and no reason to tell this story if not for Lonnie King. Lonnie King determined my future. He determined the future lives of hundreds of others who attended the Atlanta University Center colleges and were moved to activism just as he was moved to action because of Greensboro . . . Lonnie King was a giant in the civil rights story of America and in the struggle for freedom, equality, and justice. And Lonnie King was my friend.”

The Atlanta Student Movement of 1960 had far-reaching consequences well beyond Atlanta. After Lonnie King convinced Martin Luther King (no relation) to join the local student struggle, Dr. King landed in jail weeks before the 1960 presidential election, facing real prison time because of a prior charge in Alabama. The Kennedys’ hastily calculated decision to offer assistance to the King family, and GOP nominee Richard Nixon’s decision to steer clear of that crisis had a decisive impact on that historically close election, as well as the eventual repositioning of the Democratic and Republican parties vis a vis the Black freedom struggle (though Democrats never abandoned white supremacy as aggressively or unilaterally as the GOP embraced it).

This is not a new or obscure story—or one that proved an accurate predictor of how the Kennedys would respond to racist violence in the first two years of JFK’s presidency—but it’s one expertly told and substantively linked to the hard-won victories of Lonnie King and the Atlanta Student Movement in another brilliant new book, Stephen and Paul Kendrick’s Nine Days: The Race to Save Martin Luther King Jr.’s Life and Win the 1960 Election.

One uncharacteristically lighthearted story recounted in Buses Are a Comin’ that should be familiar to those well-versed in the history of the 1960s Civil Rights struggle concerns Person’s singular (and purely accidental) contribution to movement lore: the “shoe-in.”

Much of Buses Are a Comin’ celebrates the movement heroes who inspired Charles Person at the young and highly impressionable age at which he was thrown into the maelstrom of the Freedom Movement. If Lonnie King stands at the head of a distinguished class, he’s followed closely by a number of the activists Person met on the Freedom Rides, particularly three older white Riders: James Peck and Frances and Walter Bergmann. Particularly as Person joined the CORE project with a wide-eyed desire for new experience and adventure—“surfing through the [early part of the] ride with a smile on my face”—and no concept of the violence that awaited the Riders in Alabama, Person relied on the counsel of the older Riders, including CORE National Director James Farmer as well as Peck and the Bergmanns.

Person found Peck’s commitment to the cause particularly poignant: “What was a millionaire doing on the floor of a bus bleeding as profusely as Jim Peck was—perhaps bleeding out—on behalf of me? On behalf of 19 million Negroes who didn’t know who he was, had never heard his name, and would think he was a fool for doing what he was doing? Why are there Jim Pecks in the world? I still wonder. And why are there people willing to punch, kick, beat, bruise, batter, and bludgeon the Jim Pecks of the world? I did not understand it then. I do not understand it now. But I am grateful there are Jim Pecks. And I was grateful for it then.”

While Person did connect with other young Black volunteers he met on the Rides, and initiate a lifelong friendship with one, he found John Lewis intimidating and unapproachable when they met for the first time in the Washington, DC, training sessions before the buses rolled. For one thing, Person didn’t share Lewis’s deep and studied commitment to nonviolence as a way of life, rather than a tactic. “John was always serious, always straight-faced, always solemn,” Person writes. “For me, the importance of the work was primary, but I also felt a sense of adventure. There was no adventure in this for John. For John, this was as serious as life gets.”

Apparently, Person made no impression at all on Lewis during Freedom Ride training (which Lewis found less focused than the James Lawson-led nonviolent workshops he had participated in with fellow student activists in Nashville). In describing the same event and (inaccurately) listing the initial group of Riders in his memoir Walking with the Wind, Lewis describes himself as the youngest member of the initial group, omitting Person entirely.

Buses Are a Comin’ offers more than a tribute to the Freedom Riders and other activists who put their lives on the line in the face of segregationist massive resistance and stirred the youngest among them, Charles Person, to do likewise. It also aims to teach and inspire readers just joining the struggle, in a time when the work of the Freedom Movement remains undeniably unfinished.

There’s a bus coming for each of us, Person insists in his memoir’s rousing conclusion. We just need the discernment to recognize it when it comes, and the courage to board it and face its challenges. “The trip is never free for stepping on board the bus that moves America forward,” he writes. “For me, the cost of my Freedom Ride ticket and the price of my Atlanta Student Movement activism, as it was for so many in the Movement, was dropping out of college, personal injury, and lifelong physical issues . . . There is always a cost to service.”