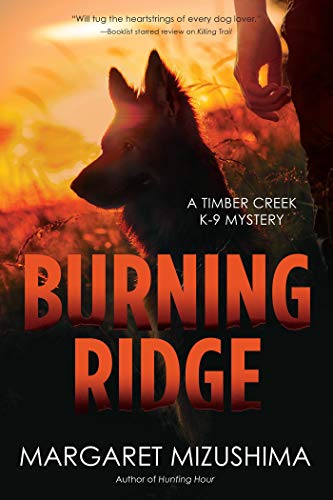 In the first three volumes of this sturdy series, K-9 officer Mattie Cobb proves that both she and her scent-tracking German shepherd partner, Robo, are an asset to the Timber Creek, Colorado, police force.

Now in book four, Mattie and Robo are not only established but in demand because they reliably provide results. That does not mean they live happily ever after.

Mattie’s past comes back to haunt her, both psychologically and physically, after she and Robo find a burned body in the Redstone Ridge wilderness. Actually, she and Robo are called in to locate the burial site after Mattie’s romantic interest, veterinarian Cole Walker, takes his daughters for a trail ride and their own dog brings them a body part. That launches the search.

Robo finds the grave as well as a second one containing three burned bodies. Combined they indicate a vicious serial killer is at large around Timber Creek. Worse for Mattie, all of the victims are connected directly to her.

The connections take her back to her miserable childhood, which we’ve learned something about through the previous volumes. Her family is now either dead or scattered, and she and her brother were raised by a loving foster family. While they helped Mattie become the upstanding police officer we know her to be, her brother went the other direction and disappeared for a long time. Mattie had only recently found him and they were trying to reconnect when the killings happened—all pointing toward Mattie’s family secrets as the cause.

To solve the crimes, Mattie must dredge up buried nightmares and face them, as well as reveal to Cole and her colleagues her horror and shame. These, plus evidence, force Mattie to be removed from the case. At the same time, the killer decides it’s time to remove her permanently from life.

Here’s where the word sturdy comes into play when describing this series. Maggie can only get through her ordeals by being a very sturdy person, indeed—mentally, physically, and emotionally. She portrays the kind of strong female role model many contemporary readers are looking for as she manages the diverse and often painful and conflicting layers of herself and her world.

In Burning Ridge, her conflicts are heightened to extremes by deadly peril. She shows herself to be a believable woman trained to be a cop who draws from every possible resource to help herself and help others, in the process solving a complex murder case that changes her life.

The narrative style conveying all this is sturdy, too: straightforward prose with no words wasted, straight-line plot, with each chapter offering a development that advances plot and character. Early in the book, there are periodic pauses for backstory reflections, but once Mattie’s backstory enters the main story, they meld together and continue on course. Viewpoint changes slow things down somewhat, but the author keeps on track so that each change adds another thread to the story weaving together.

Adding depth to the scenario is Maggie’s relationship with Robo. Unlike many animals in mystery fiction who help their humans investigate, Robo is never anthropomorphized. He might be a smart dog, even a brilliant dog, but he always acts like a dog despite being Maggie’s closest friend. Their interaction teaches us a lot about how police-dog teams train and work, along with much about how people and dogs interact personally.

The Mattie-Robo pairing makes these stories appealing to both mystery lovers and animal lovers. This volume tightens the screws on them, showing more of their strengths and vulnerabilities. If the author keeps going in this vein, the series promises to be as reliable—and, yes, sturdy—as Maggie and her canine partner.