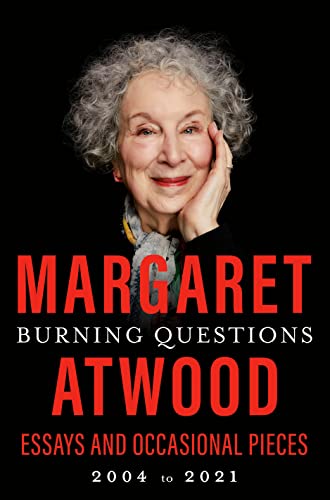 “Die-hard Atwood fans will love it.”

Canadian novelist and Booker Prize winner Margaret Atwood has soared in popularity with the immense success of recent novels like The Handmaid’s Tale and television adaptations. Her many honors include the PEN Center USA Lifetime Achievement Award.

That said, her latest nonfiction collection might better have been titled Odds and Ends. The more direct—but less enticing—title accurately describes the hodgepodge of introductions, after-dinner talks, centennial tributes, and other blather that fills too many of these nearly 500 pages.

There are few burning questions here.

Atwood’s most eager readers will undoubtedly flock to Burning Questions, as they will to anything bearing her name. Unfortunately, the book simply bears out that since 1972, when she became a freelancer, Atwood has taken “any paid work I could pick up,” as she says in an introduction.

Again, these are odds and ends of a busy freelancer’s work.

The result is a giant mixed bag of 50 occasional pieces. They offer intelligent, readable insights into the author’s wide interests and foibles—everything from zombies to Scrooge, from Barry Lopez to Anne of Green Gables, and from Shakespeare to Kafka.

To read this collection straight through is dizzying. To boot, the author admits that in looking back at her work of the period, she found “things that—quite frankly—I’d forgotten I’d written.”

Dipped into now and then, the book yields interesting tidbits about books and authors that matter to Atwood.

In discussing of Ray Bradbury’s 1951 classic The Illustrated Man, she says that in his best work, he “sinks a taproot right down into the dark, Gothic core of America. It’s no accident that he was descended from Mary Bradbury, convicted as a witch in 1692 during the notorious Salem witchcraft trials.”

In a piece on feminist Marilyn French’s three-volume history of women, From Eve to Dawn, which took 20 years to write and catalogs the abuses and outrages committed against women for millennia, she notes that French argues “The people who oppressed women were men.” Not all men were oppressors, French emphasizes. But most men “benefited from this domination, and most contributed to it, if only by doing nothing to stop or ease it.”

Her appreciation of the novelist and short story writer Alice Munro suggests the informal style of many pieces. Munro is continually being rediscovered, Atwood writes, “as if she jumps out of a cake—Surprise!”

There are obituaries on writers from Ryszard Kapuscinski to Barry Lopez. There are explications of the history of censorship and how the literary genre “scientific romances” morphed by the 1930s into science fiction. And there is impassioned praise for Lewis Hyde’s The Gift, “a classic study of gift-giving and its relationship to art.”

Issues treated at length include climate change, feminism, wealth inequality, and democracy in peril—the concerns that permeate much of Atwood’s fiction, notably the environmentalism of The Silent Spring (1962) by Rachel Carson, whom Atwood calls “Saint Rachel of All Birds.”

Die-hard Atwood fans will love it.