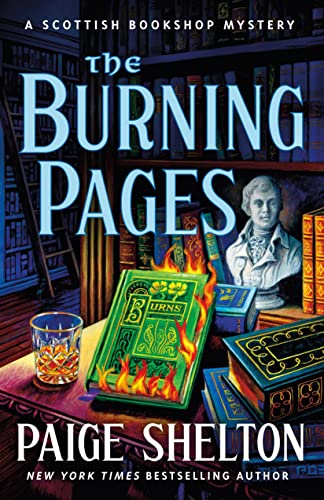 “Books are as central to these characters as they are to readers. . . . Shelton easily keeps us turning pages as we think about her Scottish world and the best-laid plans that go along with it.”

Shelton’s romp through the world of Burns and book lovers in The Burning Pages is a pleasant treat. Narrator Delaney Nichols invites us into her corner of Edinburgh with assurance and with the help of the occasional line from Robert Burns, Scotland’s favorite national poet. In this seventh Scottish Bookshop Mystery (after the 2021 Deadly Editions), Delaney is still struggling with the Scottish language even though she’s married to a Scotsman herself.

Not only is she struggling with the language but also with the locals. She’s not sure why Clarinda, a well-known criminal solicitor, has invited her to be a guest at a dinner for the local Robert Burns Society. Since Delaney appreciates the poet’s work, she agrees to attend the event as long as she is allowed to bring a friend. Instead of her husband, she invites Hamlet, a colleague from the bookstore. The dinner will be held on January 25, the poet’s birthday.

Delaney soon receives another surprise. Her brother Wyatt, who lives in her hometown of Kansas City, shows up for business unexpectedly. Delaney is delighted by his visit, especially since she hasn’t seen him since her wedding the year before. Wyatt visits her at The Cracked Spine, where her workplace holds additional surprises. Delaney’s job is to care for the warehouse where owner Edwin keeps his secret collection of books and precious items. Delaney has recently discovered a potentially alarming secret: a birth certificate for her co-worker Hamlet, who was adopted as a child.

The fancy Burns’ dinner is held at the Burns Clubhouse, an old building owned by her boss Edwin and purportedly haunted by the poet himself. Although Delaney appreciates the décor, she soon finds that attending the dinner is a terrible idea. She has been invited as an excuse for Malcolm, a member of the society, to reconcile with Edwin. The two so-called friends fought years earlier over the sale of a precious book.

The ruse doesn’t work; as soon as the other diners realize why Delaney has been invited, they escort her and Hamlet to the door as fast as possible. Delaney fumes all the way home. Who cares about the sale of an old book, no matter how precious? She’s thankful to escape the unhappy property. Her timing turns out to be useful; that night, someone sets the building on fire.

As if the fire weren’t alarming enough, Hamlet disappears and is nowhere to be found. Delaney assumes he’s gotten a hint about his origins and wants to find out more about them. The birth certificate links Hamlet to a local fortune teller, but whose fortune is she really telling?

Delaney investigates all the diners from the disastrous Burns Society Dinner. Certainly one of them is responsible for the fire. She follows them all over town, making inquiries at coffee shops and even the library. Delaney’s thorough actions give Shelton the chance to smoothly share cultural information about Scotland. For example, one of the character’s fathers owns a shop that specializes in tartan. Other tidbits abound, adding up to a personal overview of the Scottish capital.

Meanwhile Delaney discovers that she’s been set up, again, this time by someone she cares about. Does she have to be a pawn in so many scenarios? She’s a bit too nice, which also makes her reckless. This is also why readers easily side with her; wouldn’t we be nice enough to give people the benefit of the doubt? We should all hope so.

Shelton keeps a comfortable pace throughout. The story is suspenseful without being scary or violent. If it weren’t for a body or two, we might be on holiday, especially when Shelton describes such interesting spaces as the Writers’ Museum. Throughout the book there are references to Burns and his work, thus offering readers a refresher course. For example, we might not remember that Steinbeck’s 1938 drama Of Mice and Men borrows its title from Burns’ “To a Mouse,” in which the poet explains that “the best-laid plans of mice and men often go awry.” The gist of the poem warns the reader against the whims of the unexpected, a theme which meshes naturally with Delaney and her colleagues.

Shelton also offers us family fun; Delaney’s brother is a cheerful contrast to her husband Tom and her colleague Hamlet. Wyatt gives us extra insight into Delaney’s character. His observations allow for comic relief. For example, as he explains to the others: “Goodness, leave it to my sister to make friends with a killer over a book.”

Books are as central to these characters as they are to readers. A book causes hardships between rivals while bookstores provide the backdrop for uneasy relationships among colleagues. They also provide crime scenes. For book lovers, that situation makes for entertaining reading. Shelton easily keeps us turning pages as we think about her Scottish world and the best-laid plans that go along with it.