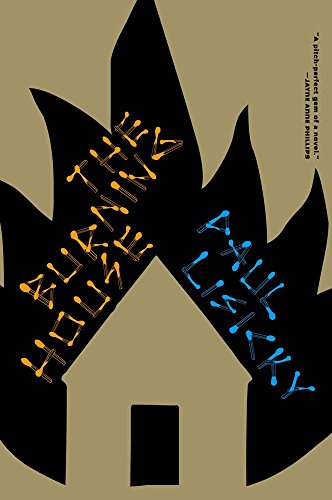 Early on in the pages of his latest novel, The Burning House, author Paul Lisicky diligently gives his readers an overview of the mechanics on which his story will spin, as he writes:

“I always thought that we all have a story that we play out, in large and in miniature, through every interaction of our lives. Joan’s story was that she’d tried to rescue lost things, only to be left behind by what she thought she’d saved. Laura’s was that she’d seek out the brightest fire, only to find her own fuel swallowed up to feed the other. My story? I don’t want to sound crude, but if you talked with the highest power, I believe you’d be told that my need to touch and be touched would lead me to hurt the ones I cared about.”

The words are those of Isidore Mirsky, husband of older sister Laura, secret admirer of younger sister Joan. The consideration of the characters and the manner in which circumstances in their lives will be played out, “in large and in miniature” as the author promises, although nothing very large ever occurs, are the author’s own.

As is this nugget, which is tucked non sequitur-ishly, onto the end of a chapter about half way through this very brief book:

“In a box, in a far back corner of a closet, there is a picture of me. I didn’t know why I hadn’t gotten rid of it: probably out of respect for my wife, who took the photo years back, during a passing moment when she snapped pictures of everything (cereal boxes, spoons, macramé, plant holders). I’m looking straight on, the yellow wall making a corona around my close-cropped head. But that’s not what bothers me. It’s the fact that there are two people in that face. Use your hand, cover each half. The right side: so wolf-like and full of suffering (eyes turned down, mouth turned slightly up) you just know, whatever the guy’s choices, he’s hellbent toward setting himself on fire. And the other half? So purified, detached, and above it all (brow arched over an opened, rounded eye) that he’s not even human. A holy man, a Byzantine monk. He’s not even here.”

Between these two excerpts, we are given pretty much everything we will ever come to know in terms of understanding the content of The Burning House, even if much of what motivates it is left undisclosed, leaving the reader with a sense of disquiet.

The Burning House is an odd little book. Weighing in at just 126 pages, it seems at first more appetizer than meal.

Only after finishing it and after experiencing the hunger pangs that remain afterward for the satisfaction that only a good story can bring does the reader begin to suspect that the novel has somehow been reduced, like a wine reduction that simmers on the stove before being finished off with the final pat of butter. But instead of intensifying the flavor as might be hoped, the sauce is overcooked, a residue on the bottom of the pan. What might have sat more satisfyingly on the palate instead comes off as something of a rind left behind by an act of dehydration—something dry and rather chewy.

What might have been lush at 250 pages is instead stringy at its lesser weight, and the reader is left wishing for the chance to see some earlier version before the text got so overworked. To get to read a fully realized plot. To get to know characters well enough to care about them. And to finally get the feeling of having had a wonderful meat, of being fully satiated and not of having been forced to gnaw at bones for what little gristle was attached.

Mr. Lisicky built his literary reputation with his two previous works, Famous Builder, a memoir, and a novel entitled Lawnboy. In both he showed a skill for language with no lack of wit, a passion for architecture (both the literary architecture of a well-wrought sentence and for the art and science of architecture itself, with construction, development and architectural details—a whole world of jalousie windows, for instance—all being major themes in all his books, including The Burning House, in which he uses the development of a beach community as a major plot point and throws in a couple more jalousies for good measure) and a weakness for landing the ending, no matter how promising the plot.

Here with a novella format, it might have been hoped that he would at last reach a conclusion worthy of his narrative. Instead, he seems to have worked the other way and weakened the whole of the narrative instead. Gone is the humor and sexuality of his past works, as well as the deft characterization, the sensitivity and the passion that flowed so easily in the pages of his other books. In their place is a sense of effort, of overworked “artistry,” of exhaustion that drains this book of the simple reading pleasure that his past work contained in abundance.

In working through the dense pages of The Burning House, the reader is given a collection of details on every page—details seem to be what is left of a narrative after the process of reduction—with themes and objects (orange juice, yogurt, impatiens) reoccurring.

We are, for instance, given a world described by its smells (remember, our protagonist is self-described as being half wolf). Our narrator worries and fusses over his own body odor, as illustrated here, on page 29:

“I was shocked and silently pleased that my mouth wasn’t dry, that my deodorant hadn’t given out, souring my shirt, making me nasty.”

“I hitched my palms into my underarms. The back of my shirt was already drenched as if I’d showered in it. Apple cores. Where was this smell of rotting apples coming from? You guessed.”

“I envisioned my hands on Joan’s face—then Saskia’s hands—sweat soaking my shirt beneath the armpits.”

Not that anything else smells much better. Joan, at one point, smells like rubber. A bedroom reeks of “sour drawer smell.” And the gym—oh, the gym: “The air smelled fetid, humid, of crusty towels and bacteria. I tasted iron in my mouth. I stepped out of my pants, certain I should have felt overjoyed at my good fortune, but I only sat on the bench. I stared at the grout lines in the floor tile until I recovered myself.

“I wanted to clean them with a brush until they were white as teeth.”

In The Burning House, Paul Lisicky does not create so much of a world for his characters to inhabit as he does a sensual sketch of their habitat, with snatches of heat, light, sound and smell. As such, he leaves his reader with a sense of dis-ease in this realm of yeasty and somewhat sticky assaults to the senses, and with a sense of disappointment as well.

The disappointment comes from expectation. Given what he has written in the past, the reader has come to expect good things from Paul Lisicky.

When they are withheld as they are here, the reader becomes sullen, both with the book in hand (Ann Beattie made so much better a use of the same title 25 years ago) and for what increasingly passes for a novel these days. Some might find Mr. Lisicky’s new work stylish, a sort of artisanal novel in which the burden of insight and understanding must come from the reader and not the writer. This reader, however, when left to do all the work for himself, can do nothing but pout.