Burning Down the House: A novel 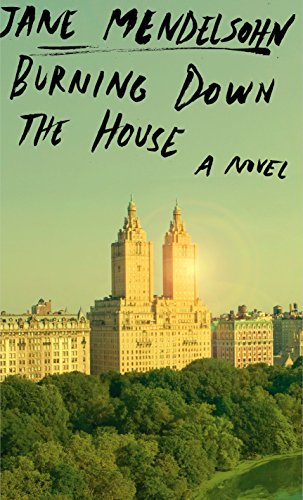 Jane Mendelsohn’s Burning Down the House is a soap opera of a novel that aspires to be a Greek tragedy, an epic, or a saga of the fall of a family empire . . . but doesn’t quite live up to it.

With its complex, multiple story lines, Burning Down the House follows the Zane family and their circle. Steve Zane, the larger-than-life patriarch and wealthy, powerful New York real estate mogul rules over his empire and family that includes adult children, younger children from a second wife, an adopted daughter/niece, a spouse, friends, and employees. Thrown into the mix is Neva, his younger sons’ nanny, who was born in Russia, abducted as a child and sold into sexual slavery, escaped seven years later, and lives in New York as the Zanes’ nanny, confidante, and finally a sort of super hero.

Burning Down the House is action-packed and scandal-filled, which makes for a page-turner. However, with the exception of Neva, and occasionally Poppy (the adopted niece) the characters are largely wealthy, spoiled, and unsympathetic. Furthermore, much of the plot is far-fetched and implausible.

For instance, it’s hard to believe that Neva, who spent her childhood living in poverty in the Caucasus Mountains and is forced into prostitution and drug use from the age of ten to seventeen, a mere few years later makes a life for herself in New York City as a seemingly polished, moderately educated, competent, level-headed nanny for a very wealthy family. Also, Neva’s relationship with Steve is highly implausible, and her dramatic rescue of Poppy is so over the top that it seems like a scene from a 1970s disaster movie.

Throughout Burning Down the House Mendelsohn attempts to create psychologically complex characters. She primarily does so by telling rather than showing. For instance, she describes Ian, a family friend: “He made no connection in his mind between these women he admires and those women whose exploitation he would be facilitating. His was an inconsistent mind. A mind whose principles gave way to expediency. Actually, a mind which did not recognize principles.”

Mendelsohn has a tendency to give each character a psychological profile early on and then elaborate on it throughout the novel. She introduces the troubled Poppy: “Poppy is self-destructive. The last thing she attempts to do is to truly hurt anyone other than herself.” The frequent character summaries come across as notes for a rough draft and make the characters feel two-dimensional.

Burning Down the House is organized somewhat chronologically, though Mendelsohn periodically gives away dramatic endings. Early on in the novel the narrator reveals that Steve will collapse and be hospitalized. Or later, after Jonathan betrays his father Steve, the narrator discloses: “Already in the car he is gliding, gliding toward the tragic, the enacting of feelings too enormous to contain. He is already ruined; Steve ruined him long ago. But now he is determined, unconsciously, to be part of his own destruction. He thinks he can bring Steve down without hurting himself. This is his rage. This is his ignorance. This is his minor tragedy.” Once again, Mendelsohn tells too much but doesn’t show. While tragedy, by definition, may be inevitable, the narrative defining and redefining and analyzing are overkill.

Mendelsohn toys with different writing styles and techniques throughout her novel. The Prologue, which tells the tale of a nameless child (whom we soon discover is Neva) reads like a fable or fairy tale: “It begins with a child. She lives far away from any city, high up in the mountains. She sits by a fire.” For the most part the novel is related in the past tense by an omniscient narrator; however, periodically, the narrative jarringly shifts to present tense to no particular literary end.

Burning Down the House also includes some fine writing. Mendelsohn can create clear, lyrical, graceful prose. She beautifully illustrates Neva and her charges: “Three hours later when she and the boys left with Patrizia for the beach it was a hot morning with the sun shattering against the East River into a million glinting shards. The helicopter rose high above the water and flew away from the FDR Drive, the gray buildings, the jagged city. For once the boys looked out the window, and they flew through the sky like little gods, and the shards of glass on the water melted into puddles of white the boys rode on together and for a few minutes their faces were lit up and warm and newly open to the natural world.”

Unfortunately, the novel is also riddled with melodramatic and purple prose. In relation to his breakup with Poppy, Ian is described: “His heart is a mess, a raw organ laid out on a chopping board. He can see it quiver. This is the ache of actually loving her.”