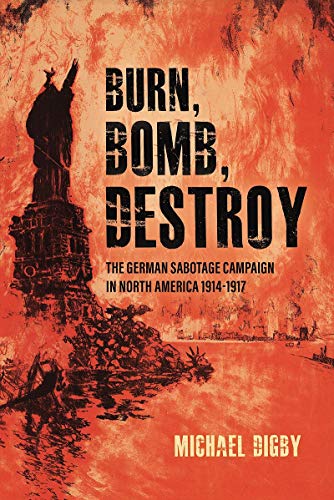 In his book Burn, Bomb, Destroy, Michael Digby, who served in the US Army and as a Los Angeles County Deputy Sheriff, tells the story of German espionage and sabotage operations in the United States and Canada during the First World War. It is a fascinating tale of international intrigue, geopolitics, divided loyalties, and criminal investigations during wartime. But it leaves several unanswered questions.

The origins of the First World War are many and varied, and included a system of European alliances, several international crises in the years leading up to the war, and a naval arms race between Great Britain and Germany. The immediate spark that ignited the war was the assassination of the Austrian archduke and his wife by a Serbian terrorist in Sarajevo on June 28, 1914. The actual fighting broke out in August 1914, with Great Britain and its Commonwealth, France and Russia on one side, and Germany and Austria-Hungary (the Central Powers) on the other side. Other countries would join the war later.

But the United States under President Woodrow Wilson declared its neutrality. Yet American companies from the war’s outset armed the belligerents, especially Britain, Canada, France, and Russia. American munitions plants, harbors, and ships effectively aided the war effort against the Central Powers because although American companies were willing and anxious to supply both sides in the war, the British blockade reduced the flow of trade between America and the Central Powers.

One German response to this development was to organize cells of spies, agents of influence, and saboteurs in the United States and Canada. Digby notes that the German operation was headed by Abteilung III-B, the Imperial German intelligence service, and its chief Walter Nicolai. Nicolai, Digby writes, viewed America as an “industrial threat” to Germany. America would be Nicolai’s “battlefield—one unencumbered by the traditional rules of warfare.”

The Germans established a “War Room” in an office building in New York City near Wall Street and set up satellite offices in other New York office buildings. The mission of this War Room was twofold: subversion to promote Germany’s image and influence among both the American people and their leaders, and sabotage to disrupt the flow of munitions and war supplies to Germany’s enemies. This effort, Digby notes, involved both German nationals and US citizens of German descent.

The leaders of these secret operations included: Johann von Bernstorff, Germany’s ambassador to the United States and the overall coordinator of the effort; Franz von Papen, Germany’s military attaché to the United States; Franz Rintelen, a German naval officer who replaced von Papen; Consul-General Franz von Bopp who oversaw west coast efforts; Wolf von Igel, who served as von Papen’s secretary; naval attaché Karl Boy-Ed; Heinrich Albert, a commercial attaché who served as a paymaster for the subversion and sabotage campaigns; Carl Heyden, a shipping expert who reported to Albert; Paul Koenig, who oversaw surveillance and counter-surveillance efforts; and German businessman Albert Kaltschmidt who was based in Detroit.

Digby details the major sabotage operations both in the United States and Canada, as well as law enforcement’s efforts to counter those operations and investigate and prosecute the perpetrators. The first target of the campaign was the Welland Canal, a waterway that connected the Great Lakes with the St. Lawrence Seaway and the Atlantic Ocean. Launched in the later summer of 1914, the operation was abandoned due to confusion among the saboteurs and increased security at the Canal.

A few months later, German saboteurs bombed the railway bridge that connected Vanceboro, Maine, to St. Croix, New Brunswick, in Canada, a bridge that carried Canadian troops and supplies bound for the battlefields of Europe. The explosion, Digby notes, damaged windows on both sides of the border. Canadian investigators subsequently arrested Werner Horn, who confessed that he blew the bridge in support of “my Fatherland.” He was charged in both Canada and the United States, pleaded guilty, and served only 18 months in prison.

Other German sabotage operations included attaching cigar-shaped bombs to ships used to transport supplies to Britain, France, and Russia, and planting bombs at US-based chemical and munitions plants in several states. Other railways and factories (the Detroit Screw Works, the Windsor Armoury, the Peabody Factory) were bombed. These operations caused damage in property and in some cases lives, but they did not significantly interrupt the flow of supplies to Germany’s enemies. As Digby notes, despite these bombings, “the manufacturing and shipment of munitions and other war supplies was only increasing.”

So the Germans attacked bigger targets, including Black Tom Island in New York Harbor, “home to the largest munitions and ammunition depot on the East Coast,” and Kingsland (now the New Jersey Meadowlands), home to the Canadian Car and Foundry plant. Both attacks caused devastating damage to the facilities and surrounding areas. Three months after the Kingsland operation, the United States declared war against Germany.

The immediate causes of the end of America’s “neutrality” were Germany’s public announcement of a return to unrestricted submarine warfare and the revelation of the Zimmerman Telegram whereby Germany promised Mexico it would help it recover lands it lost to the United States following the Mexican-American War. But Digby believes that the increasingly deadly and destructive German sabotage operations in the United States played a significant role in President Wilson’s and Congress’ decision to go to war. Digby notes that soon after the US declared war against the Central Powers, federal agents began mass round-ups of enemy aliens.

The questions that Digby’s book leave unanswered are threefold: First, was Germany justified in waging a sabotage and propaganda war inside the United States given that our munitions and supplies were helping to kill Germans on both the Western and Eastern fronts in Europe? Second, should the United States have erected much stronger security measures at the outset of the European war in 1914 given the fact that America, though declaring neutrality, was effectively aiding the war effort of Germany’s enemies? And third, can the origins of the controversial Espionage Act in 1917 and Sedition Act of 1918 be traced to the German sabotage campaign?

And a related question: Did the experience of the German sabotage campaign during World War I have any impact on President Franklin Roosevelt’s infamous Executive Order (later approved by Congress) that forcibly relocated people of Japanese ancestry from the West Coast after the attack at Pearl Harbor?

And finally, should we simply take it for granted that in times of war, governments, including the United States, will do whatever they believe is necessary to protect their homeland and interests, including the surveillance and incarceration of alien populations who might sympathize with enemy nations?