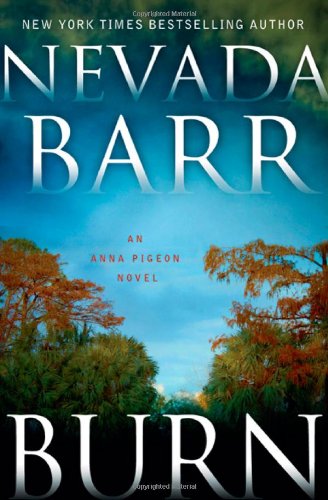 Many, if not most, series authors reach a point where they want to change direction, either to freshen the experience of writing about the same characters year after year, or because the characters themselves evolve and demand escape from their formula.

One or both of these appear to have happened to Nevada Barr, whose latest novel in her Anna Pigeon crime series has veered off into darker realms and changed narrative style. Loyal readers won’t be surprised, as Anna’s career as a national park ranger has taken her through progressively more awful situations, and revealed many faces of violence and depression in convincing detail. And anyone who’s read Barr’s standalone novel, 13½, will recognize her tendency to gravitate toward a deeper exploration of evil.

The new book, Burn, feels like a bridge between 13½ and the Anna Pigeon series. Here, Anna is on administrative leave to recover from her 15 previous adventures in parks across the country, which have left her physically and emotionally scarred. The first clue that this adventure will be different comes on page one, where, instead of diving into Anna, the story opens with seedy secondary characters doing something revolting to set the stage for what Anna gets into.

Barr has used this setup technique once before in the series, in Hard Truth; and in other books she has alternated viewpoints to support Anna’s story. This book does both to a greater degree, spending extra time with characters who don’t know that Anna exists, caught in their own hells moving inexorably toward the other to inevitably squash Anna in between. This helps build tension and explain a complicated scenario, but it distances readers from the main character they opened the book to follow. It also allows the author to develop the horror Anna must ultimately battle

The second difference between Burn and the rest of the series is the absence of a national park setting. Instead, the New Orleans Jazz National Park is a bit player, simply providing a reason for Anna to be in town (staying with a friend who works there).

Barr gives the park a nod in her signature dark/light style—“In the name of political pork, the Park Service preserved so many worthless bits of history that some said the NPS was where white elephants went to die. Then there were places like this, where the sacred torch of a time long past was carried, still burning, into the present”—but otherwise reduces it to a place Anna passes through incidentally. This one-step-removed aspect resembles Dick Francis’s later books, in which he moved the action from horse racing to various enterprises supporting that industry.

For Anna, New Orleans presents challenges and dangers in an urban jungle filled with magic and madness. Removed from her natural environment, unemployed, unarmed, and unplugged from the law enforcement system that validates her, distant from her husband, emotionally unstable, and physically weakened, she nonetheless finds her way into trouble—affirming the old saying, “Idle hands are the devil’s tools” (or, as Barr puts it, “In New Orleans you were never more than two streets from trouble”).

Therein lies difference number three from the series. In Burn, Anna voluntarily inserts herself into ugly situations when she has both the reason and the means to stay detached; in the previous books, trouble has come to her, arising from and threatening what she holds dearest, compelling her to act in self-defense. In Burn she becomes a rogue avenging angel, saving children from slavery to pedophiles and a shattered woman falsely accused of murder. Of course, she gets the stuffing knocked out of her, but this time she’s working outside the law and jeopardizes not only her career but also her marriage and her sanity—not to mention her life.

Although each of Anna’s decisions is credibly rationalized and nobly motivated, she keeps choosing the path of self-destruction over self-preservation, leaving her survival unclear to the very last page. The book’s underlying story is the moral struggle inside one’s soul in the face of terrible options. How do you choose between inaction that will perpetuate evil and result in the deaths of innocents, and action that might change those outcomes but ruin—or end—your own life? Is Anna a fool or a hero to choose altruism over safety?

Barr lets readers decide for themselves.