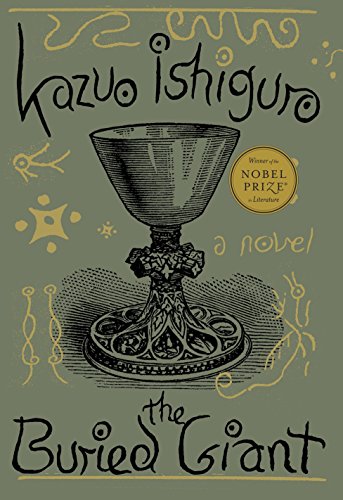 “I come not to praise The Buried Giant, but to bury it. Alas.”

I come to this review with a deep bias and a heavy heart. The deep bias is because of how much I love Remains of the Day, one of the finest novels, for my money, ever written. The heavy heart is because I’ve just read Ishiguro’s first novel in ten years, The Buried Giant, and I couldn’t believe he wrote it.

The quality of the writing is not an issue in The Buried Giant. It’s the same grace, the same thoughtfulness, the same wordsmithing. The thing I didn’t understand is why he wrote the book at all. The Buried Giant tells the story of an England long gone, a thousand years in the past, where people still lived in longhouses and feared their neighbors, near and distant.

Most of the book tells the story of a journey across England involving Axl and Beatrice, two denizens of the collective community living in post-Roman Britain.

As one might imagine, they encounter villains and soldiers and some decent people as well. But who cares?

Remains of the Day told three stories, each of which was compelling. One involved a love relationship that never quite took off between a man and a woman who managed a great, stately home in England. The second told the story of how the owner of that great home dabbled in politics, as men of his time and class did, and showed the end of that sort of amateur interference with the work of professional diplomats. The third story was again of a journey across England, but this one far more compelling—where Stevens, the butler, takes a trip by car and discovers that even though all he has left is a relatively short period of life, it’s still up to him to make the most of it.

It’s painful to say that there are no such compelling stories in The Buried Giant. The main characters, Axl and Beatrice, are so simplistically drawn that it’s hard to empathize or even warm up to them. There’s little about the time in which the novel is set that fascinates. The whole thing is a mystery—why would a writer as competent as Ishiguro write a story that resonates so weakly for an international readership that expects and even craves so much more from him?

Maybe the problem with this book is that the main character, Axl, is far too cheerful, and Ishiguro doesn’t do cheerful all that well. He owns gloomy. He owns reserved. But even he finds it hard to make a character who is essentially optimistic, cheerful, and decent into someone the reader will want to follow for hundreds of pages.

If you want to read a truly great novel, go get Remains of the Day. Even if you’ve seen the movie, which was wonderful, the novel is even better. In short, I come not to praise The Buried Giant, but to bury it. Alas.