Bully Market: My Story of Money and Misogyny at Goldman Sachs 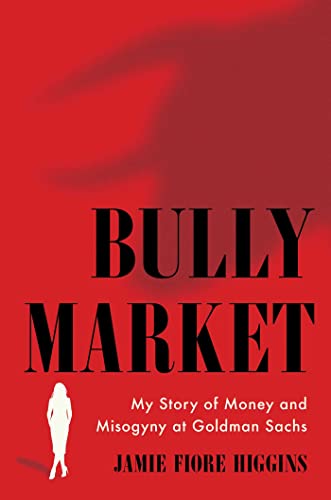 The investment giant Goldman Sachs continues to make headlines by insisting all its workers report back into the office five days a week. And now along comes an insider’s account—from a top female Managing Director—that outlines why even one day a week is too much when it means working at Goldman Sachs.

Jamie Fiore Higgins’ blistering memoir of her nearly two-decade career at Goldman depicts the company as an appalling, misogynistic Evil Empire. It’s hard to pick out which of her anecdotes is the most grotesque because there’s so many from which to choose.

The interesting side note here is that Jamie is not some disgruntled employee. In fact, for much of her tenure, she subsumed her identity to become “Jamie from Goldman.” She was holding her nose for much of it but make no mistake—she took part in the late nights, the excessive drinking, and even had an affair just like all the finance execs portrayed in fictional television shows like Industry on HBO Max.

The one thing that separated her from the pack was her gender and of course, that was not the same as having the wrong Hermès tie. As a woman, Jamie faced an aggressive male culture filled with Alpha frat boy-men who were very eager to prove their worth. When she’s tasked with separating a junior male executive from an account where he’s having an affair with a female executive, her underling crumples up the list and throws it at her.

“I stood up and headed toward the door,” she writes, “but he grabbed me and pinned me against the wall, his hand wrapped around my jaw. ‘Who the . . . do you think you are?’ he screamed into my face, his spit showering my nose and cheeks. ‘If I could, I’d rip your . . . face off.’”

It might shock the reader to know that Jamie does not report this criminal behavior to HR or the police. Instead, she continues to work with the bully and succeeds by looking the other way and placating him. Although readers might object to Jamie’s passive guide to success, she beats them to the punch and is her own sharpest critic. She admits over and over that she did not rock the boat because it would mean losing out on the obscene amount of money she earned each year.

When one reads about all the money and perks that company employees reward themselves for essentially doing a job that does not need to exist—i.e., moving money around—it’s enough to make the most-die hard capitalist think about voting for the Worker’s Party.

Jamie is the daughter of a middle-income, Italian American family from New Jersey and, in her first year at Goldman, she earns more than either of her college-educated parents ever made in a single year. Eventually, she creates her own family with a devoted husband and four children, making it ever harder to walk out on a job that she knows is toxic. In this case, toxicity comes with a million-dollar bonus.

Her immediate boss makes it clear to her that children come second, if at all, at Goldman. The company has a state-of-the-art lactation center, but it sits empty because mothers are afraid to use it. After her first child, Jamie signs up for the lactation center and is told by her boss that it’s not a good idea. She goes home, puts away her breast pumps and buys formula, she says, with tears in her eyes. Later in her career, another boss tells her that her desk, filled with family photos and drawings by her kids, is not appropriate for a Managing Director. She shoves all the framed mementos into a drawer.

When she does finally “man up” and uses the lactation center, co-workers openly moo at her across the open floor planned office and leave a stuffed cow on her desk. And this was back in 2016, not the 1950s!

But that is the thing that might drive a reader up the wall about Jamie. She is, by her own admission, complicit in the company-wide misbehavior because she chooses money over morals. After the umpteenth example of how awful Goldman’s male employees are, it’s hard not to get a bit angry at the messenger. We understand, to a degree.

To her credit, Jamie does not hold back in recounting her own personal foibles. She admits to a torrid love affair with a fellow Managing Director. It’s a necessary step in blowing the whistle on her fellow Goldman workers. She had to admit her own sins, or the Goldman mafia surely would have come out of the woodwork to discredit her. Give her points for understanding that and having the guts to lay it all out there.

Jamie finally hits her breaking point after witnessing her boss engage in a drunken, racist diatribe in a karaoke club. She works up the courage to go to HR and the representative assures her in precise language that no one will know who made the report. The next day, a higher-up calls Jamie in and gives her the Godfather talk: We’re all family and if there are any disagreements, we take care of it in the family. We never go outside the family.

That is the beginning of the end. The final straw comes after she has a miscarriage and is afraid to take off the two weeks her doctor insists on. Instead, she goes in and nearly passes out on the first day back. She comes up with a plan—a spreadsheet of freedom—where she and her husband calculate how much money they’ll need so she can quit once and for all. After having her fourth child, she finds the nerve and the right amount of money to walk out.

This book is the beginning of her next career. One hopes, as does Jamie, that things are better now after the #MeToo era and a broader recognition of inclusivity. The reader can only wonder.