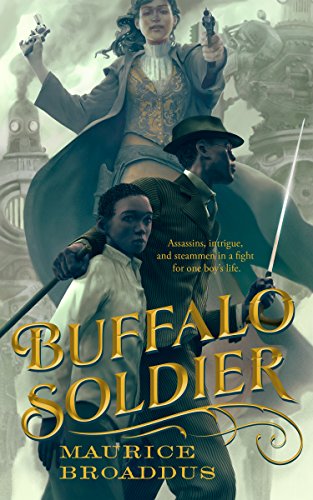 Buffalo Soldier is less of a short novel and more of an introduction to a world. Desmond Coke has abandoned his duties in a Jamaica that has thrown off imperial control, kidnapped a child with a mysterious past and a very big future in order to give him a real life as a normal kid, and has fled into a Steampunk alt-America looking for safety. They have to travel rough through two out of three kingdoms to find it, and there are people on their tail from the very start.

On the one hand, Buffalo Soldier does what steampunk still needs done: It brings diversity and balance to a genre built on a non-diverse Victorian ideal, countering the imperialism built into the field. Broaddus’ depictions of a free and technologically advanced Jamaica and un-massacred Native Americans in the Five Civilized Tribes were some of the best parts of the book, as were the old stories told about both.

Broaddus handles the reality of a steam-powered war machine with a gritty realism that is sometimes lacking in steampunk stories, and has a flare for setting scenes and describing both fashion and locales. The fight scenes are daring, and the banter is clever. It builds a world that looks incredibly cool, but also looks interesting, like it has a lot of stories to tell.

On the other hand, this book is light on character development, and for something under a 150 pages, spends a lot of time telling more than showing, and having characters standing around debating more than it has them doing. People float in and out of the story, sometimes transparently for drama's sake rather than for their own stories' sake, and despite clever dialogue and interesting hints of backstory, the reader is left wanting more. Not in the sense of this book ended at just the right point and where's the next one, but in the sense that it felt like two-thirds of a story; a good set up, a good setting, but maybe it just started too early and the real story comes after this. Buffalo Soldier could have been a full-length novel, and it is sad that it isn't. It's the first of the Tor mini-novels that felt incomplete in itself.

That being said, if more stories in this world do follow, maybe the cumulative effect of them will make up for the lightness here. If this is a series, this first book would be more of a prologue, and really, that's what it feels like: setting up the board for things that haven't happened yet. Making sure all the characters are in the right place for future adventures to happen. Skimming through a complex world and barely touching on those complexities, more to establish a map than to really tell a story. It almost feels backward—the characters are doing things less interesting than the world, because they're an excuse to talk about the world, rather than the world being a setting to talk about characters.

It's hard to pin down, which is both vexing and catching: If there are more stories in this smoky, steamy version of America, where colonialism didn't work out so effectively as it did here, that is a good thing. Hopefully, future tales would get into the minds and hearts and reasons of the characters more than this one did. It's not a waste of time—the cultural and historical ramblings alone were cool enough to make it worth it—but it wasn't what it could have been, and more stories in this world could fix that.