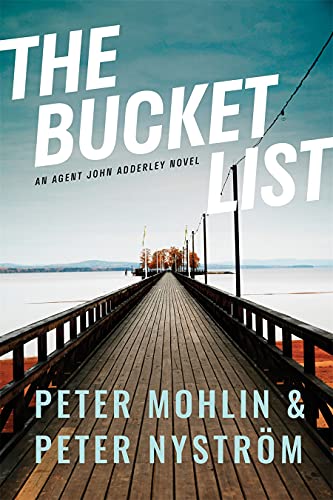 “Layered and lethal . . . The only thing better than the pleasure of this suspenseful and tightly plotted ‘Scandi noir’ investigation is knowing there’s a sequel on the way.”

Authors Mohlin and Nyström bring both journalism and screenwriting skills to this intense and unusually long first effort. FBI agent John Adderley, wrapping up an undercover stint to break up an international drug ring, knows he’ll never go back to his old life afterward, and that’s fine. Until, that is, he gets a packet from his long-estranged and dying mother in Sweden, calling him to investigate a cold-case murder being blamed on his half brother, whom he hasn’t seen since he was 12. Deliberately breaking the witness protection rules after the trial’s over, he head to his hometown of Karlstad to dig for the truth, no matter the cost.

At first, chapters alternate with the earlier time of disappearance of Emilie Bjurwall, college-age heiress to a clothing empire, as seen through her father Heimar’s eyes. If Emilie is a rebel, her dad is a defeated misfit, resigned to being the eye-candy husband of his powerful wife, whose family owns the company. He’s the complete opposite of John Adderley, whose ability to plan and instant commitment to action should mean a great record in crime-solving—but backfire as he misleads his own team.

Then the action increases in pace, and drives directly through until the unexpected and impressive finale, based on John’s own deadly choice:

“John felt his palms go clammy, as Ruben continued. ‘I’ve not spoken to the boss yet. I wanted to find out what the situation was myself—see whether you were going to make contact with your brother and leak details of the investigation. But so far, all you seem to have done is drive by the house—so I’m willing to give you a chance to tell Primer yourself. He doesn’t have to know about our conversation here. With a little luck, he won’t throw you off the case. But it might also end in immediate dismissal and an internal investigation for gross professional misconduct.’

“‘I realize this is going to have professional consequences,’ said John. ‘But the most important thing is that my true identity doesn’t get out. You have to understand that there are people out there who want nothing more than to see me dead.’ . . .

“His colleague started the engine—a clear sign the conversation was over.

Boosted by smooth and deft translation by Ian Giles, The Bucket List—the title refers to a mysterious tattoo on the arm of the missing,presumed murdered heiress—weaves in lively side episodes of passion and pretense. Adderley’s unethical mother and brother make everything tougher. And whether the international syndicate will catch up with him before the crime’s actually solved means the pressure of that ticking clock never lets up.

The book’s already taken a debut novel award in Sweden (“Crimetime Award”) and merits more. The only thing better than the pleasure of this suspenseful and tightly plotted “Scandi noir” investigation is knowing there’s a sequel on the way.