The B.S. of A.: A Primer in Politics for the Incredibly Disenchanted 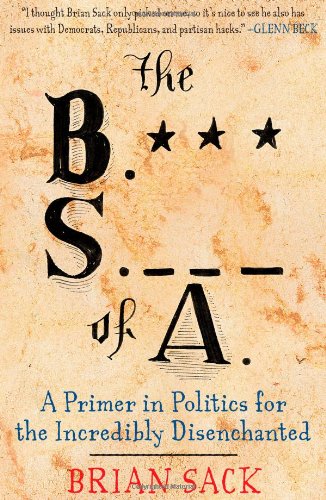 “Liberals, conservatives, and anyone else with a passionate point of view all need to learn to laugh at themselves. The B.S. of A. could be a good start . . .”

Brian Sack is indeed a funny guy. He knows politics, and he knows how to string words together.

Politics wonks will get a lot of chuckles from The B.***S. _ _ _ of A. (a thinly disguised euphemism for “The Bull Shit of America”), as Mr. Sacks takes a jeweler’s loupe and a whoopee cushion to the Constitution, the two-party system, the election process, and other hoary bits of high school U.S. history. His query about why President Barack Obama would give Queen Elizabeth of England an iPod evokes priceless images. (Can she download “Rule, Britannia” from iTunes?) And his analysis of campaign ads is spot-on, when he writes, “there should not be a single one of us—not one—who listens to or watches a political advertisement and believes a single thing said in it.”

But there won’t be as many chuckles as Sacks thinks. He is just too sure of how clever he is, and he doesn’t know when to stop. Comparing the Constitution to Michael Jackson is striking, if weird. Comparing it to Jackson plus the second episode of the Star Wars saga and “the assembly instructions for an Ikea night table” within three pages is too much cuteness.

With the author forcing himself to be funny multiple times in every paragraph, inevitably some of his efforts will not only fall flat, but even go way beyond the bounds of decency. The Nazis were “the party with the funky logo whose leader shouted a lot.” The Thirteenth Amendment outlawed slavery, although “the racism thing lingered a bit.” Uh, no.

Furthermore, Mr. Sacks’s credibility is hurt by at least one serious mistake (and some minor ones). In explaining the impact of the decennial census on the redrawing of districts for the House of Representatives, Mr. Sacks claims that “More population means more districts and that means more seats in the House. The current 435 House seats will likely be increased by the time we get to the 2012 election.” Actually, there is zero likelihood that the number of seats will be increased, because it’s been set at a firm 435 since 1913. That’s why we see such frantic juggling after every census: If Texas gains four seats, then Ohio and New York must each lose two, but then Nevada adds one . . .

The good news is that The B.S. of A. is not as biased as a reader might have feared from a veteran of Fox News and an erstwhile colleague of Glenn Beck, even if Mr. Sacks is not quite the impartial observer that he pretends to be. (“Do I have a political agenda? No,” he asserts, presumably straight-faced, in the Preface.) He shoots an almost-equal number of zingers at both political extremes. He really, really, really hates Bill Clinton, the U.S.A. Patriot Act of 2006, and teachers’ unions, with George W. Bush and Big Government in general running a strong second.

So the conservative bias is subtle. For instance, the author repeatedly blasts the Patriot Act as a violation of civil liberties. Fair (and balanced) enough; in fact, more liberals than conservatives tend to agree with him on this. But he never gets around to admitting that this law was promoted, passed, and signed by a Republican-led Congress and a Republican President, the otherwise disdained George W. Bush. Instead, Mr. Sacks manages to single out Democratic President Obama for advocating one relatively small infringement, a provision allowing law enforcement officials “backdoor” access to BlackBerry, Skype, Facebook, and the like.

Similarly, Chapter Ten describes an assortment of unsavory political “types:” “the loon,” “the scoundrel,” etc. They are precisely balanced, one Republican for each Democrat; however, most of the Republicans hail from decades ago, including Senator Joseph McCarthy of Wisconsin, who by now has become a bipartisan bogeyman. The Democrats are much fresher, like Congressman Charles Rangel of New York, who is still in office. In other words, the GOP has shed its tainted past, but the Democrats are still sinning.

(Full disclosure: This reviewer is clearly identified, in the note at the bottom of the review, as the author of a book called The Overloaded Liberal.)

In a welcome change, Mr. Sacks briefly turns serious at the end, as he vows, “I have not given up. . . . if we can detect it [bullshit] when it presents itself and work hard to prevent contributing to it, we can certainly help see to it that this climate of disenchantment doesn’t overpower us.”

Liberals, conservatives, and anyone else with a passionate point of view all need to learn to laugh at themselves. The B.S. of A. could be a good start, tasted in occasional small bites. But readers should be just as cynical about this book’s hidden messages, as Mr. Sacks is about politics.