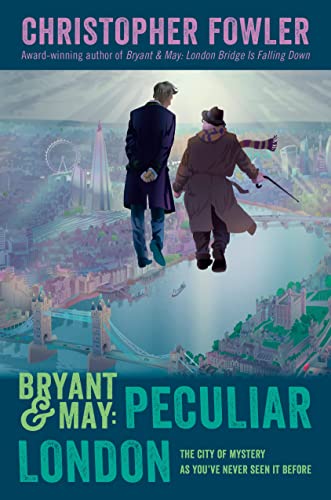 “Fowler reports that his literary agent said (with delight), ‘Oh, it’s a Bryant & May book, just without the murder plot!’”

After 18 books full of the London detection adventures of 80-year-old Arthur Bryant and his partner John May (not as elderly and far more modern), Christopher Fowler allows his eccentric pair to lay out their very unusual knowledge of London for readers ready for a distinctively different travel guide.

Most importantly, this volume does not attach to specific investigations of the Peculiar Crimes Unit—a “venerable specialist police team . . . founded during the Second World War to investigate cases that could cause national scandal or public unrest” (from Fowler’s website). Instead, it’s a delightfully ridiculous and historically rich set of explorations of the aspects of London that might be missed by a conventional tour guide: specifics of many, many pubs. Reading the book takes far longer if you pause to look up, say, the Lamb & Flag public house in Covent Garden; the pub’s very real website even shows the narrow passageway at the entrance described by Arthur Bryant. The menu includes buffalo-milk ice cream. (It’s shocking that Bryant misses this detail on his tour, but then again, the point of a public house for the PCU members involves an alcoholic beverage and British traditional dishes, right?)

DCI John May interrupts on occasion to remind Arthur of details like how to record on a cassette tape and what a mobile cell phone is called (Arthur calls it a walkie-phone), and sometimes to lend an air of almost normality among the 475 pages. Others making cameo appearances include co-workers and of course Raymond Land, head of the PCU. Land’s introduction includes such snarky comments as “If you’re still planning to read this volume of rambling conversations with half-mad friends, good luck to you. I reckon it’s your last chance to dodge a bullet but what do I know, I’m only the Unit chief. You’re big enough to look after yourselves. Don’t come complaining to me.”

Fowler reports that his literary agent said (with delight), “Oh, it’s a Bryant & May book, just without the murder plot!” Contrariwise, consider it a murder mystery that’s expanded its setting details to a highly realistic 475 pages (yes, that’s the second time mentioning the book size; how long was the last travel guide you carried? Not the one on your walkie-phone, please). And where else can you find a page of “Bryantisms” all put together as a resource?

By now it should be clear that this book will be quite confusing to those who haven’t read at least one PCU mystery in the past. But there’s nothing wrong with a good factual compilation of London guided tour detail, heavy on the history, and wryly confusing, is there?

After all, where else can you find Arthur Bryant explaining London’s (non-pub-related) strength: “For every Terence Rattigan, Elizabeth Bower or George Eliot, there’s always a disreputable, struggling rebel writer seeking like-minded individuals. . . . For a bookish chap like me, Great Britain is a paradise.”

Besides, who else but Arthur Bryant is going to list for you the notables cremated at the Golders Green Crematorium? Fear not, he claims he’s not about to vanish into retirement or leave his city: “London is like a greedy old landlady. She didn’t ask me to come, didn’t invite me to stay, and won’t miss me when I’ve left. And that suits me fine.”