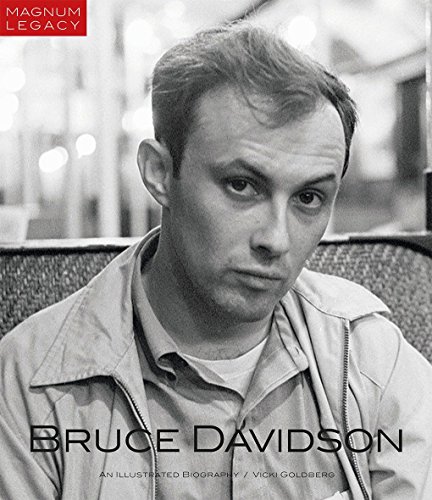 This is the second in a series of books profiling Magnum photographers, the powerhouse that probably changed photography and photographers forever. But this is far more than an attractive, coffee table book. It holds not only a fine collection of intriguing photographs, but also the story behind the man who crafted these images.

Bruce Davidson turned down a staff position with Life when he was just twenty-five—a statement that probably makes today’s young aspiring photographers sigh with envy, not only because Life magazine would have been top of the aspirational charts for most photographers, but also for the dearth of “staff” positions just about everywhere these days.  Considering he grew up in the Chicago suburbs with his divorced mother and younger brother during the Depression, when unemployment was running at 25%, this was an even bolder step.

When he was ten years old in 1943, his friend Sammy asked if he wanted to “watch him developing.” He had no idea what that meant but when he “found himself inside a dark room for the first time (and) watched Sammy take what looked like a piece of blank paper and sink it into a tray of what looked like water” the magic of photography gripped him.

Davidson was given a camera for his bar mitzvah, and his passion grew while his scholarly efforts diminished. Possibly an undiagnosed dyslexic, he “fiercely, constantly detested being told what to do, whether at home or at school.”

But in 1949 his photograph of a baby owl won the Kodak High School Snapshot contest. “That photograph is a clear signpost to his future work. Half of the bird is obliterated by black shadow, and in the light a single enormous eye looks piercingly at us.”

Davidson’s work spans many varied topics and pivotal times, but his curiosity and empathy are evident in everything he does. He seems to creep into the underbelly of the world he is observing, starting “as an outsider, usually photographing other outsiders, then, at some point I step over a line and become an insider.” He describes one of his famed collections of images studying gangs as actually “about being a teenager;” his images centered on the civil rights movement are about the people, not the protests.

These are not sweeping landscapes or pretty faces to appeal to the casual browser simply looking for eye candy images. They are strong, deep, and sometimes shocking moments in life seen with the eye of a man with an amazing talent for telling a complex story with a single shot.

This is a brilliant book that gives the privileged reader an opportunity to ride with Davidson on his journey and see the world through his eyes.

After a successful career as an accredited journalist, PR director, and magazine publisher, in which she commissioned and selected photography, Viv Young began screenwriting and published a novel.