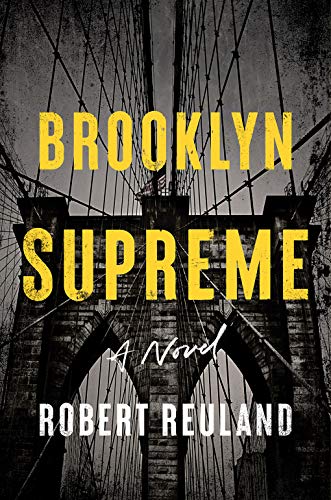 “This sustained compelling storytelling like Lehane and French, now in Reuland’s hands, lifts Brooklyn Supreme far above a conventional cop or legal novel into tormented wrestling with the flaws of our time.”

Justice. That’s at the heart of the best crime fiction, and Robert Reuland brings a heartfelt seriousness to the pursuit of justice in his powerful third novel, Brooklyn Supreme. The title is a nickname for the state supreme court in New York’s most populous borough—a city unto itself, diverse and gritty and wracked by high-speed urban change.

Reuland takes the car-burning, cop-assaulting side of New York’s 2020 street protests and wraps it around an ironic confrontation. Inexperienced and physically tiny police officer Georgina Reed, faced with a huge Black man who’s just robbed a store and who’s now yelling at her and reaching for “something” in a threatening way, pulls out her firearm and kills the man.

Suddenly she’s no longer a person, except perhaps to police union representative Will Way, who gets the first chance to coax her to tell the truth about the shooting. He fails to get past her clearly cooked story and watches her become a pawn for political factions in and around the court system.

But Will is equally a pawn, and his effort to correct the way Georgina’s being labeled and charged—it’s convenient to have the shooting be labeled “racist” even though Georgina herself is Black, and clearly her partner is more savvy at using the system to get ahead—eventually threatens Will’s own standing.

By assigning Will Way to the union rep task, Reuland situates him halfway between “former cop” and “court function.” This middle ground means all of Will’s allies are uncertain ones, and so is his career. It’s very clever positioning in terms of crime fiction. The shadows and threats emerge from both the “justice = just us” system and the Brooklyn environment, with a flavor very similar to Dennis Lehane’s Boston, Tana French’s Dublin, and William Laidlaw’s Glasgow.

Reuland also lays bare the ways that race and history are manipulated for personal gain by many who claw their way up the political or journalistic ladders. To Will Way’s eyes, the protesters and counter-protesters begin to blur: “With the exception of their lapel ribbons—yellow for Free Georgina! and black for the Babes—the two factions were indistinguishable. They dressed the same, looked the same, and both carried the same placards demanding the same things: TRUTH! and JUSTICE! and NO MORE LIES!”

The Brooklyn Supreme courthouse itself, with its marble façade labeled “Equal Justice Under Law,” takes on the same ambivalence. As Georgina’s prosecution gets nastier, Will Way confronts a member of the District Attorney’s team, a woman who’s only willing to talk with him because she’s been pulled off the case herself. Will rants, “This was never a prosecution, Jacqueline. This was about taking down a cop—as a Band-Aid on cancer. . . . We’re going backwards. We’re just throwing virgins in volcanos, hoping to make it rain.”

Handicapped by the classic burdens of crime novels—a crumbling personal life and a dependence on alcohol to drown his pain—Will persists in an effort to get Georgina a fair deal from the twisted mechanisms she’s fallen into. In a sense, it’s his job. But mostly it’s his effort to stand up straight after being bludgeoned by the system himself. Thrusting Brooklyn Supreme even deeper into heartache is Will’s slow realization of the losses he’s sustained—including one he hadn’t even been aware of, brought to him during this case.

This sustained compelling storytelling like Lehane and French, now in Reuland’s hands, lifts Brooklyn Supreme far above a conventional cop or legal novel into tormented wrestling with the flaws of our time. The ending may feel a bit too gentle for readers accustomed to the fierce darkness of these other authors. But the price paid and the horrors of our overwhelmed policing and justice networks resonate, long after the book’s cover is closed.