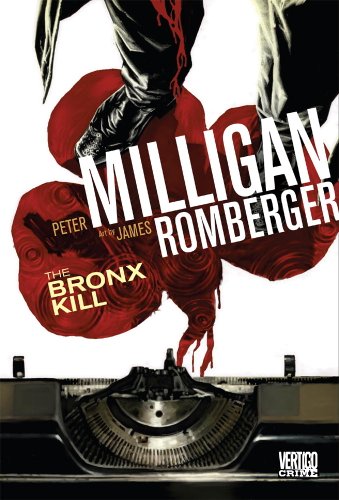 “History is a nightmare from which I’m trying to awake.”

Fate, family and friction, secrets and lies all collide in Peter Milligan’s excellently titled new graphic novel, The Bronx Kill. This is “gutter Dickens,” filmic noir of the highest order, brilliantly imagined and lavishly drawn. Even those unfamiliar with the graphic novel cannot fail to be drawn in by what is a terrifying exploration of the way in which past impacts on the present and destiny tugs at the coal-tails of ambition.

From the explosive opening to the shocking denouement, The Bronx Kill delivers vertiginous, nightmarish thrills and spills aplenty, while never losing those depths and shadings which make it an intriguing, often troubling character study of a family in crisis.

The Bronx Kill concerns an Irish American family with a mystery at its heart. Being a cop runs in the Keane blood. Nevertheless, the novel’s stubborn protagonist, Martin Keane, refuses to accept a career in the force as his destiny. “I knew . . . I wasn’t going to be a cop. I wouldn’t do what was expected of me.” He also says of his family: “I’ve spent most of my adult life trying to outrun them.” He is desperate to find his own path and not tread in the footprints laid by his policeman father, grandfather, and great-grandfather. In one of James Romberger’s wonderfully effective full-page frames, there is a scene of Martin and his girlfriend Erin trudging through the snow. “All I see is footprints,” says Erin. And footprints in the snow make for an excellent metaphor for Martin’s situation.

Instead of becoming a cop, Martin writes. It is not a popular choice with his father. “Sometimes I think my old man and me will keep having the same argument forever,” he says. And it is this father/son relationship which forms the key conflict within the novel; a relationship which is as barren and derelict as the area which gives the novel its evocative title. But the Bronx Kill is not only symbolic of the heart of darkness within the Keane family, it is also the actual place where his great grandfather was gunned down in the opening scene; a haunting, memory-filled place to which the key players keep being dragged back throughout the book.

The Bronx Kill is the place where Martin and Erin go to pick over the bones of the disastrous review of his second novel, a novel which “fails miserably to live up to the promise shown by the first,” a novel which is “mind-crushingly dull.” Indeed, such a review would be an apt description of Martin as a character. At the beginning of the book, he appears self-absorbed, complaining and distant; Erin thinks he’s “cut off.” He is also prone to self-doubt and also annoyingly verbose. It’s hard not to become annoyed by comments such as “my family’s labyrinthine past is full of ghosts,” and “that’s such specious bullshit.” When a vagrant confronts them, attempting to steal Erin’s bag, Martin reacts characteristically badly, leaving her to fight off the mugger. Later, she calls him a coward and he responds by saying: “I never said I was physically brave. There’s a difference. A dichotomy . . .” It is hard to feel much sympathy for Martin then. Harder still when he decides to travel to Ireland for four months to write a new book, leaving Erin at home.

On Martin’s return to the States, the action proper begins. Erin disappears, a disappearance that neatly echoes the disappearance of his grandmother years ago. Past and present start to collide and secrets that should have remained hidden start to come to life. Martin’s mental disintegration, his unraveling, is brilliantly captured by James Romberger here. Further depth is added by excerpts of the novel Martin researched and started to write in Ireland. His margin notes, which Milligan also includes here, add further nuance.

There is something very clever going on here; structurally, Milligan’s narrative becomes rich and multi-tiered. This is more than just a comic book, more than a graphic novel, it is intertextual, knowing fiction. The excerpts from Martin’s novels shed light on the novel as a whole and also his development as a more fully rounded character. He begins to act. And although Martin’s character arc is never quite completed, he does change. He does grow. He grows despite the horrible creeping secrets about his family that slink out from the rock under which they’d been hiding.

The climax of The Bronx Kill draws all the threads and tiers of narrative together neatly and effectively. In Milligan’s hands, what may have been a simple yet grim crime story has somehow become something more. At one point, Martin’s father urges him to “try writing a cop novel. Like Ed McBain or James Ellroy.” These are dangerous comparisons for Milligan to make and yet he pulls it off. The Bronx Kill, in its own way, has all thepithy gravitas and grim effectiveness of an Ellroy. This historical nightmare has epic proportions.