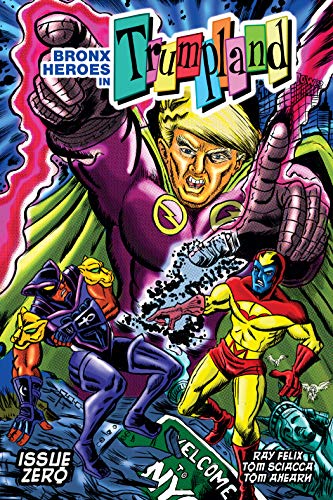 Bronx Heroes in Trumpland has three primary contributors. Each has written a foreword to this graphic novel. Each forward is concise, modern political commentary, such as to be found in a newspaper or magazine op-ed. Each piece directs withering criticism at Donald Trump. The forewords are well worth the read. They are perfect set ups for the graphic light storm which follows.

Trumpland blazes with color and action. Its format reminds one of a traditional Marvel or DC Comics super saga. Trumpland abounds with heroes and villains, some fanciful, some modeled on the all too real. Each character possesses unique super powers and the inclination to freely use them against each other. The pages sizzle with energy blasts unleashed from gloved fists. They thunder with sounds of impact as each blast reaches its intended target. Yet this is no ordinary yarn of intergalactic struggle. The tale springs from the reality of America’s current political strife.

The henchman-villain of Trumpland is Trump himself. The art of parody morphs him from blue-suited bigot into a surging mass barely constrained by its purple spandex uniform. His tangled mop of orange hair has evolved into its own menacing life form. The confederates that surround Trump in Washington ride with him here. Each, however, has been re-imagined by parody’s pen.

For example, Vice President Pence has donned a complete set of armor handed down from the Christian Crusades against Jerusalem. Melania Trump is renamed Malaria, evil and driven to protect her meal ticket. Her large bust seems to seek escape from restraint to do independent battle against those who dare rise against Master Trump.

Initially, the Forces of Trump seem to prevail. They easily capture the local do-gooders, who are easily recognizable as the initial field of Democratic presidential candidates. Eventually, the heroic titans of American Ideals turn the tide. Trump is bashed and banished off planet. However, the saga does not end with that event.

An interesting epilogue and several independent chapters follow. Each is its own cautionary tale to the American public. They give warning that there is not just a single overt threat to American democracy. They announce that there are deep, hidden weaknesses within the system itself.

For example, the Blue Wave, furies led by a truly scary looking Hillary Clinton, threatens to drown the light of freedom with old ways of thinking and PAC money. They are admonished and warned to do the right thing for the people by entities whose muscles pulsate with unearthly powers. The loosely functioning Electoral College and voter apathy are also shamed by other-worldly beings. All is heady material for a graphic novel where action and not thought is usually contained within the cartoon panels. Here, the unique formula works. A thoughtful, colorful civics lesson is worked into the mind of the reader. The creators of this graphic novel earn a vote of appreciation.

As an added bonus, the book concludes with several special features. The chief heroes are given realistic biographical profiles. There are stand-alone, full-color portraits of them, together with pencil drawings of their development. There are pencil storyboards that stand next to the full color completed scene. Finally, there is a back page which provides a meaningful glimpse of the three primary developers of the work. One hopes that they create additional episodes beyond the self-stated “Issue Zero” of the Bronx Heroes.