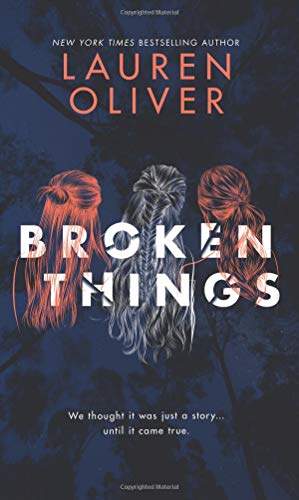 A teenage girl is viciously stabbed multiple times in the woods, the result of a preplanned attack by her two best friends. The motive? The two girls were driven to do it, they claimed, because of a fictitious dark character made popular online.

This is a real story that played out in the news not so long ago. Somehow the victim survives and lives to tell the grisly tale, leaving the adults of this world in a horrified moral quandary. What would provoke two teenage girls to do such a thing to their so-called best friend? Are they innocents manipulated by the oftentimes rogue and violent content found on the Internet or cold-blooded would-be killers?

In Lauren Oliver’s Broken Things a similar scenario is depicted, only the victim, the outwardly bright yet darkly troubled Summer Marks, is in fact murdered. She is unable to have a voice unless it is through the excerpts of her fan fiction that is quoted at the start of many of the chapters. All three girls are inspired by an unfinished fantasy novel titled The Way into Lovelorn.

Summer’s two best friends, Brynn and Mia, along with her boyfriend Owen, are suspected of committing the crime but never convicted. Instead the locals in their town in Vermont mete out their own punishment by coldly shunning the teens, the ramifications still felt five years later when the story begins. When Brynn recalls Summer’s desire to become famous one day, Brynn, now infamous as an alleged murderer, laments “She didn’t realize how much depends on what you’re remembered for. Sometimes, it’s so much better to be forgotten.”

Up to this point, both Mia and Brynn have been unable to move on from their friend’s murder. Mia is home schooled, apparently sheltered from the outside world yet lives with her mentally ill hoarder mother who keeps everything, no matter how random the item, ever since the murder occurred, when her husband left and the family fell apart. Brynn rigs her drug tests so that she is constantly staying in the sterilized safety of rehabs, never having to return home and face her mother and sister, and, in effect, experience the blunt force of reality.

The story is told in alternating points of view, Brynn and Mia’s, moving from the past to the present. Begrudgingly together again, with Mia’s friend Abby, an outspoken social media personality who is also home schooled, they set out to find who really killed Summer Marks. Other characters, including Owen, at certain points go along with the girls on their fact-finding mission to track down Summer’s killer.

However, the real mystery lies in the possibility that someone else had helped Summer write the fan fiction, quite possibly the person responsible for her death.  This discovery is where the plot really picks up.

Throughout the story, Oliver touches on the intrinsic insecurities and put-on confidence of teenage girls with an empathetic hand. At one point Abby confuses Brynn staring admiringly at her for critical scrutiny and defensively says about her weight, “My body wants to be fat. Why bother hating something you can’t change?”

The steady pace of the narrative is oftentimes abruptly stopped with the author’s overuse of similes in both Mia and Brynn’s chapters, which remind the reader of the authorial voice, not necessarily the voices of her characters, “my lungs feel as if they’re being flattened to paper” or “my heart does a sickening flop, like a wet rag slapping in my chest.” Likening one thing to another can become cumbersome and distracts the reader from the impact of the ongoing story line. Suspense gets diminished, if not altogether lost.

While some readers may find the ending wraps up a little too quickly, the person and reason behind the murder is as unsettling as it is intriguing, a true shadow in the dark, and makes for an important conversation about just who young people should trust.

In many ways, Broken Things is more than a hybrid between a teen mystery and a psychological thriller, well worthy of a broad audience. It’s a cautionary coming of age story about a close-knit friendship between three very different young girls, the fractures that result from this bond, and the healing power of recognizing and embracing one’s own self-identity.