The Broken Road: George Wallace and a Daughter’s Journey to Reconciliation 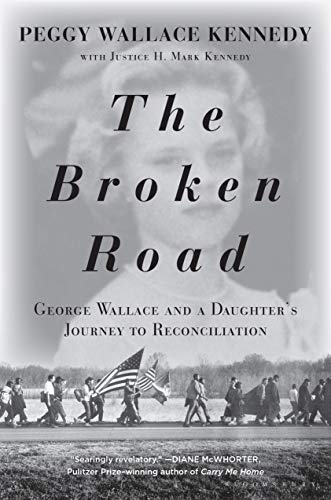 “The Broken Road seeks not only to answer the ‘why’ of George Wallace’s behavior, but also to reconcile his legacy of bigotry and hatred, and subsequent redemption, with his daughter’s own legacy of a lifetime spent trying to right the wrongs he perpetrated.”

It must be difficult being raised as the child of a prominent politician. Being raised as the child of the nation’s most prominent racist, the man who said, “Segregation now, segregation tomorrow, and segregation forever,” infinitely multiplies the difficulty level. It is from that perspective that Peggy Wallace Kennedy, daughter of former Alabama governor and third-party presidential candidate George Wallace, has written her memoir, The Broken Road: George Wallace and a Daughter’s Journey to Reconciliation.

The Bible speaks in Exodus of “visiting the iniquity of the fathers upon the children,” the very iniquity for which Kennedy sought to atone. In what must have been a very difficult admission, she acknowledges that, when it comes to race relations in this country, “My daddy had been a key player—on the wrong side—of this inspiring and heart-wrenching history.”

Wallace, who started in politics as a member of the legislature then was later elected as circuit court judge, “seethed with ambition.” Although his initial leanings were progressive, maybe even liberal (by Alabama standards at the time), the author writes that “Daddy was willing to bend his moral universe toward power.” And to be politically ambitious in 1950s Alabama meant kowtowing to that southern state’s power structure, epitomized by the Ku Klux Klan.

After being defeated in the Democratic gubernatorial primary in 1958 by a hardline racist, Wallace vowed, in crude terms, that he would never again be viewed as the lesser racist. Backed by the KKK, and vowing to “stand in the schoolhouse door” to block forced integration, he rode the racist train to the governor’s office in 1962. He kept his promise the next year by standing in the doorway at the University of Alabama to block two African American students from enrolling. Perhaps this is a lesson that keeping campaign promises is not always desirable, especially ill-conceived promises designed simply to mobilize a political base.

Although the stand appeared to be carefully orchestrated and was ultimately unsuccessful, it cemented Wallace as the standard-bearer for segregationists across the South and nurtured higher aspirations. Because Alabama law prohibited him from succeeding himself as governor, Wallace set his sights on the presidency in 1968, running as a third-party candidate on the American Independent Party ticket.

In the meantime, Wallace’s wife Lurleen ran for, and was elected, governor of Alabama in 1966, intended as a placeholder for her husband. The plan was for him to run for governor again in 1970 following Lurleen’s term, assuming he didn’t win an unlikely trip to the White House, but she died of cancer less than two years after her election.

By then, Wallace was in the midst of his presidential campaign, but his daughter maintains that he began unraveling following the death of Lurleen. “He cried for hours without stopping and refused to pull himself together during brief moments between waves of anguish, indifferent to the way the rest of us felt,” she writes.

When her father returned to his campaign for the presidency, the author began college at Mississippi State College for Women, where she first really felt the iniquities of her father being visited upon her.  “In the fall of 1968, I was neither white nor black. The color of my skin was Wallace.”

Most readers know the rest of the story, including Wallace’s loss in the 1968 election, re-election as Alabama governor in 1970, then running for president again in 1972, this time as a Democrat, culminating in an assassination attempt that left him as a paraplegic and wheelchair-bound for the remainder of his life.

Although he again ran for president in 1976, and was twice more elected governor of Alabama, the real story for the author at that point was about changes in her father’s life following the assassination attempt. “It was during this period that Daddy repented for his past actions with both words and deeds. He made outspoken declarations of his changed heart. His own suffering had contributed to the evolution of his thinking. He had come full circle, returning to the young man he had been in Clayton [Alabama] as a young judge.”

The family house in Clayton was the home into which the author was born, the home to which Lurleen had taken her following Wallace’s first loss in his bid for the governorship, when his womanizing and drinking nearly drove her away. The home on “an abandoned roadbed, asphalt heaved up and cracking.” The home on the broken road.

The Broken Road seeks not only to answer the “why” of George Wallace’s behavior, but also to reconcile his legacy of bigotry and hatred, and subsequent redemption, with his daughter’s own legacy of a lifetime spent trying to right the wrongs he perpetrated. She writes that her “secret most important question was: Would Daddy be proud of who I am?”

When Wallace died in 1998, his daughter succumbed to a deep depression before emerging more determined than ever to have a positive impact in the wake of her father’s legacy. “The broken road of my childhood still remains with me, packed up somewhere inside, rustling around every now and then to remind me of those days in my life when everything was possible.”

She goes on to say, “The lesson of the broken road is one of coming to terms with the past, not for the sake of forgetting or forgiving, but rather for truth. For, history depends on what is told, taught and accepted by those who lived it.”

Living that lesson, finding redemption for the “iniquities of the father,” Kennedy concludes, “I was perhaps Daddy’s most important legacy of all.”