Broke: Hardship and Resilience in a City of Broken Promises 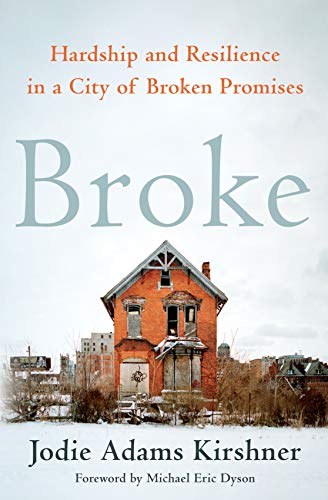 “Jodie Adams Kirshner brings together a wide cast of those most affected and thereby opens the case of and for Detroit and our other large cities suffering financial strain.”

Jodie Adams Kirshner is well qualified to write such a book on bankruptcy and its broad social effects in America. As a research professor at New York University who also teaches bankruptcy she knows the law. Following her close interviews with seven representative local residents and her detailed investigations in the history of Detroit, she comprehends the complex and far reaching effects of bankruptcy.

Her interviews with Miles, Charles, Robin, Reggie, Cindy, Joe, and Lola move the book out of academia into the real drama and voices of those most involved. Interspersing these colorful and often intimate interviews with history and legal explanation, allows her writing to shine and the readers to care. Here is how she introduces one of her chief sources:

“Miles strode through the streets of Detroit, long-legged and focused, carrying a cup of keys to all the houses he contracted and an envelope of charge cards to cover construction supplies. He had reached his mid-30s with experience and skills and a reputation as a guy who handled stuff, on budget and on schedule. People called to ask for him by name, and he turned down small jobs.

“He had ‘the contracts, the contracts,’ he said, the words tripping off his tongue like a beatbox poet’s. ‘Detroit’s a good thing when it’s going good.’”

Her writing cuts to the bone yet enlivens the telling. Without teaching or preaching Kirshner shares a world that cannot be denied. As the Star Tribune declares, "Kirshner pulls back the curtain on the Detroit Renaissance to reveal an alternate African-American universe."

As Anna Clark points out, “in showcasing people who are persistent, clever, flawed, loving, struggling and full of contradictions, Broke affirms why it’s worth solving the hardest problems in our most challenging cities in the first place."

Without succumbing to a single point of view, Jodie Adams Kirshner brings together a wide cast of those most affected and thereby opens the case of and for Detroit and our other large cities suffering financial strain. This is a book is worth reading for its essential story as well as its eloquence of style.