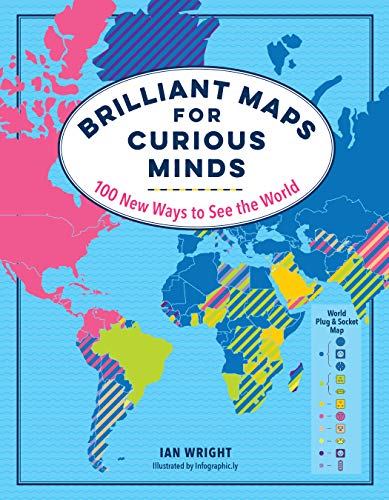 “This simple book serves the schoolroom for all ages, the coffee table of any household, the shelf in any library, and a font of wonderfulness for any trivia gamer.”

This book is exactly what the title says it is.

And only people with no curiosity whatsoever will fail to find it fascinating.

The author’s opening line sums it up: “If you love maps, trivia, or just learning more about our world, then I think you’ll love this book.”

He goes on to explain how it’s a print distillation of his website, BrilliantMaps.com. From the almost 350 maps posted and managed on that site, he selected 100 for this hardback book and teamed up with a publishing and graphics company to translate between mediums.

The maps are gathered into nine topics: people and populations; politics, power, and religion; culture and customs; friends and enemies; geography; history; national identity; crime and punishment; and nature.

Some maps answer questions that people wonder about without bothering to look up, such as how the area and populations of nations and states compare between continents. Clever overlays make those proportions comprehensible.

As a subset, some maps show the surprisingly small distributions and concentrations of population within huge countries, such as Australia and Canada.

An unexpected map shows the average male and female height worldwide. Do we need to know this? No, but it’s interesting to see, and correlates with ethnic clusters around the globe.

That’s an example of the many aggregates one is disinclined to think about measuring but prove interesting and informative when laid out for display. For instance, countries that have had a female leader in the past half-century, or which countries have state religions.

Another map answers a common question: What’s the difference between England, Great Britain, and the United Kingdom? A simple map makes it clear at a glance. Likewise the locations of the Seven Wonders of the Ancient World.

Other maps are more resource oriented, such as the one that shows every country’s highest-valued export, or the world gold reserves in grams per person. Who knew?

And would you ever have thought to see a map showing which countries have the highest speed limits? Or the specific word different countries use for the almost universally enjoyed sport of “football”?

American readers might be surprised to see a map of countries that have no McDonald’s. It’s astonishingly few.

Here are two specs you probably never thought to look for: heavy-metal bands per 100,000 people, and countries with the most Miss World winners. These are a bonanza for folks who love trivia!

In fact, the broad trivia aspect of this book makes it a must for writers’ and editors’ reference libraries. They will especially appreciate the map of the longest place names in the world, with their correct spellings (winner being an impressive 85 letters long).

Here’s one that will make most everyone pull up short: “Male circumcision: one thing that unites the US and the Middle East.”

We probably don’t need to know that, but turn the page and you get a technically useful map of plug and socket types used around the world—vital for travelers who carry their own electrical appliances.

If you’ve ever wondered what the historic British Empire was, the map of “22 countries that the UK has not invaded” will shock you. It covers “countries (or their historical predecessors) who were fought or occupied by the UK (or its predecessors) at some point in history.” Compared to what the UK is now, this is a mind-bender.

On it goes, from the number of European countries that have invaded Poland to the true size of Chile and Africa, to the literal truth of the saying “all roads lead to Rome.”

A real grabber is the map showing the scope of the entire internet in 1969. Though some readers can recall an era before computers and the internet, the majority of readers, who grew up with both, will be bowled over when they get a true sense of how far we have come, so fast.

One trio of maps presents casualty scope for the two World Wars and 9/11. It’s unusual to see them in relation to each other, and indirectly pertinent to today’s pandemic as a way of understanding global scale of calamity.

Then there are geographical oddities, such as countries that have no rivers. Imagine: No running water on a surface, anywhere. How do people live? Or have you ever thought about how many lions used to roam the world, compared to the paltry number left now? Chilling.

Another perspective jolter: the number of sharks killed by humans vs. all the humans killed by sharks. A staggering disparity there.

Perhaps the most useful map is the one presented in the inside-cover spread. There we have all the countries in the world laid out, clear as the proverbial bell. When was the last time any of us saw a globe giving the same information, never mind up-to-date country borders? This map is given at the same scale as the interior maps and serves as a base reference for them.

“Base reference” is a good summation of the project. This simple book serves the schoolroom for all ages, the coffee table of any household, the shelf in any library, and a font of wonderfulness for any trivia gamer. Makes for a great gift, too. Although flipping through the book takes about 20 minutes, it can be revisited many times in idle moments, or lead to hours of absorption on the parent website.

Brilliant Maps for Curious Minds delivers exactly what it promises.