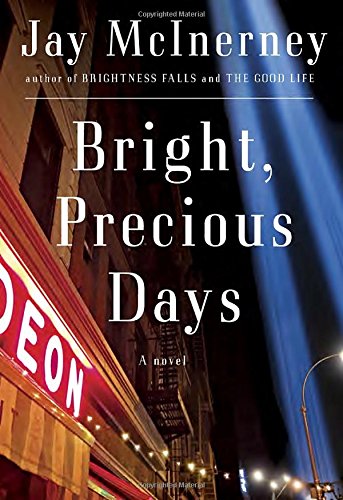 Jay McInerney’s reach with the Brightness Falls series is ambitious. In a recent interview with NPR, McInerney says he began the trilogy with an idea of the perfect couple. “I think [when] we’re in our 20s we all know that couple,” he said. “They’re smart, they’re good looking, they got married young, they seemed to have solved the romantic riddle early in life. . . . I was intrigued by the idea of a marriage that survives.”

In Brightness Falls, Russell and Corrine Calloway are in their late 20s; in The Good Life they are in their forties; in Bright Precious Days, they are in their early fifties. The setting of all three novels is New York City and at the core of each novel is a recent event that shakes not only the Calloway marriage, but the foundations of the city itself.

When he chronicles these cataclysms in the city’s history, McInerney is at his best. In Brightness Falls, he describes the wretched excess of the ’80s (“the period of big hair and big shoulder pads”) and the crash of ’87 in prose as sharp as his eye for the telling detail. When, in The Good Life, Luke McGavock, the man who will become Corinne’s long time lover, tells her how he joined a line pulling bodies out of the wreckage of the Twin Towers and found himself standing in a pool of blood, the unspeakable horror of 9/ll is captured in an image as self-contained as a teardrop.

In Bright Precious Days, McInerney’s vignettes of life in the city during the days leading up to the freefall of Lehman Brothers stock and the turmoil that came in its wake pack a wallop. “The City was holding its breath. It seemed as if a seismic event was in progress, shifting the tectonic plates beneath the island, toppling monuments and sucking rivers of wealth into the sewers. Billions had somehow disappeared.” At a Christie’s auction, the announcement of a de Kooning drawing inspires boos from the crowd because the drawing comes from the collection of Dick Fuld, the head of Lehman Brothers, who Corrine’s companion identifies as “the man who single-handedly flushed it down the drain.” Russell enters the venerable old Brook Club and detects “a distinct undercurrent of melancholy in the murmuring convocation . . . the unmistakable whine of privileged white men with the blues.”

Regrettably, this pulsing “sense of felt life” is nowhere in evidence when McInerney turns his attentions to “the perfect couple.” Near the end of Bright Precious Days, Russell’s love letter to Corrinne, written almost three decades before the action of the novel, surfaces.  It quivers with the passionate impatience of a young lover. “I want my life to start now. I knew the first time I saw you at the top of that staircase at Phi Si that my life would be lived for you. . . . Ours will be a happy ending. We’ll create a love story for the ages.”

McInerney tells us that both Russell and Corrinne weep when they read the letter, but nothing in their behavior toward one another in the novel points to a happy ending for them. Russell does not live his life for Corrinne. He is driven by his need to “be to his era what Max Perkins was to his” and by a lust that rivals that of a 14 year old. He is unfaithful to Corrinne, and at the age of fifty-one, he “loved walking home through the clamorous, sweaty youth brigades of the Meatpacking District. He was bewitched by the vistas of feminine flesh, the exposed limbs and shoulders and the upper slopes of breasts swelling above halter tops, the flimsy summer dresses clinging at the top and fluttering up above the knees.  He wanted them all . . .”

When he discovers that Corrine has been unfaithful to him, Russell sniffs her panties for evidence and rips her bra and drapes it over the screen of her laptop. He refuses to forgive her and when he discovers that she has sold a painting to keep him from bankruptcy, he asks her if she “fucked” the artist for the painting.

Russell’s tears when he reads his love letter are for himself.  “Remembering the boy who’d written that callow and idealistic letter, he felt acutely that he’d let him down.”

In The Good Life Corinne had dimension. She altered the direction of her work life; she fell truly in love, and she suffered because she felt that her infidelity betrayed both her family and her best self. In Bright Precious Days, she’s little more than a paper doll that her husband and lover can use as they wish and finally reject.

Russell drunkenly rapes her and then sullenly resents her. Luke notes the “visible arc of her decline. He could imagine the changes to come, the inevitable sagging and shriveling,” and he rejects Corrine’s invitation to join her for a friendly cup of coffee.

And so Russell and Corrine face the future, burdened by mistrust and memories of what they once were. For the Calloways, “the romantic riddle of life” remains unsolved. As Russell bitterly remarks, “The phrase perfect marriage ought to be abolished. . . . it’s a pernicious oxymoron.”

Gail Bowen is the author of the Joanne Kilbourn Shreve mystery series (M&S-17th series novel, The Winners Circle, to be published in 2017); the Charlie D series (Orca Books); and How To Write a Mystery (U. of Regina Press, pub, 2017). Six of the JKS novels have become made for TV movies viewed internationally.