Briefly, A Delicious Life: A Novel 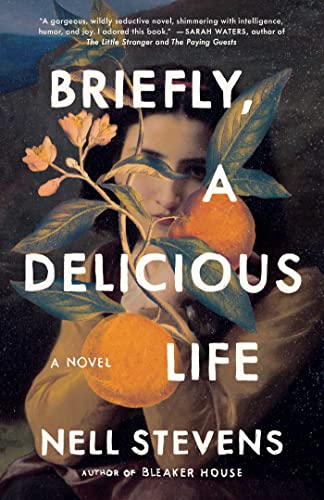 Historical fiction that features real people can be problematic. Readers may come to the subject matter with some knowledge of these characters and the outcome of their stories, so creating suspense—a reason to keep reading—is a challenge for the writer. Nell Stevens, in her new novel Briefly, A Delicious Life, meets this challenge in several ways, chiefly by introducing as her narrator a charming ghost who has a unique vantage point from which to tell her story.

The ghost, Blanca, has been resident at the Royal Charterhouse of Valldemossa in Mallorca for over three centuries when the former monastery’s relative calm is disrupted in 1838 by the arrival of the writer George Sand, the composer Frédéric Chopin, and Sand’s two children. It is worth noting that Sand published a novel in 1842 about her stay in Mallorca with Chopin, A Winter in Mallorca, which provides a great deal of the detail that brings Blanca’s tale to life, including the ordeal of importing Chopin’s piano from France and the purchase of a goat to provide Chopin with milk to aid his return to health.

Blanca first sees what she thinks is two men kissing in the monastery’s courtyard, only to discover that one of the men is actually a woman—George Sand, dressed in her customary and gender-bending attire. Soon, it becomes clear, when the visitors are joined by the children and a servant, that these foreigners intend to take up residence in the Charterhouse.

Blanca observes Sand’s peculiar behavior—smoking cigars, writing all night, ignoring her children—and also has the power to see her thoughts and to experience her memories. Thus, in several chapters titled “George Remembers,” Blanca and the reader learn about Sand’s marriage, her non-conformity in Parisian society, and the beginning of her affair with Chopin.

While Sand is a fascinating character, both to Blanca and the reader, Chopin’s presence creates an element of mystery here. For his composing, and until his own piano arrives from Paris, a decrepit piano has been found. Just when that instrument seems to be driving him mad, his own piano appears, allowing him to continue his work. From the time of his arrival, however, he is plagued by consumption, a condition that often leaves him too weak to get out of bed. Nonetheless, he continues to work and completes a number of his well-known Preludes, the names of which provide the titles for several of the chapters focused on the composer.

Perhaps the most engaging part of the story, though, comes in chapters titled “I Remember,” in which Blanca recalls her own life. A young girl born in Mallorca in the mid-15th century, she takes notice of a novice from the monastery. They slip away together regularly to swim in the ocean, something the brothers from the monastery don’t do. Eventually, the novice seduces Blanca, although the girl has little notion of what is happening.

The rest of her story is sprinkled throughout the book, including her eventual death, although early on she offers a clue of her difficult entry into the afterlife. She recalls: “To the living I was no longer visible, but I had no concept of what the dead looked like to each other. Would I appear to them as I was in life, and if so, at which point during my life? I hoped my eternal form was not my final living one: blood-smeared, vomit-streaked, and utterly, utterly outraged.”

In the meantime, Blanca has fallen in love with George and does her best to protect her and her family from the village gossip and the dangers from servants and shopkeepers who would cheat her. George isn’t the first living woman she’s fallen in love with, perhaps understandable after her bad experience with the novice and her observation of the crimes of other men.

Partly because of those experiences, she seems to enjoy being a ghost because of the disruption she is able to create: “I taught myself to enjoy simple pleasures: making people jump, knocking things over, tripping up passersby and particularly my enemies. And I began to test the limits of what I could do.” The brothers in the monastery who failed to come to her aid when she was living become a favorite target for these pranks, but she also tests her skill with Sand and Chopin.

Blanca seems to relish her ventures into George’s thoughts, and in the process learns what it’s like to be a writer: “Some nights she did nothing but write, and others, she did nothing but cross out what she had written the night before. Several times she fed pages to her candle as carefully as though she was spooning porridge to an infant.”

In addition to being able to read the thoughts of living people and mine their memories, Blanca can, with some effort, see their future. “For such a complex skill, which even I didn’t truly understand, the reality was simple: their future was just there, beneath the surface of the people whose minds I got inside. All of their life was inside their heads.” For reasons that aren’t clear, she is reluctant to use this skill, although in time she will be unable to resist the temptation and will see the future for George, Chopin, and George’s children.

Overall, the novel is an engaging re-imagining of the Mallorca episode of Sand and Chopin’s affair. It is also an examination of the different forms that love may take. Blanca, for example, as a child, is infatuated by men, and one man in particular. As a ghost, she is drawn to women, partly because she empathizes with their suffering at the hands of men, and partly because she finds their strength to be thrilling. Unconventional Sand is married, but neither she nor her husband refrain from affairs with other people. In the case of George, that includes a relationship with Marie Dorval, an actress, one of the memories Blanca sees. It’s a ghost story, yes, but there’s a good deal more to it than that.