A Brief History of Scranton, Pennsylvania 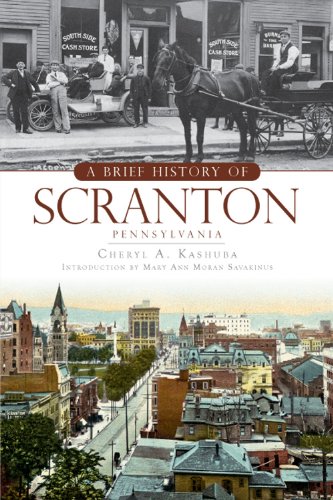 Kashuba’s work is filled with meticulously researched facts and figures, but it doesn’t stop there. She transports the reader to an earlier time by writing history in a narrative style. You can feel the excitement of those waiting on Wyoming Avenue to take the first electric trolley run, the car’s incandescent lamps lightning the way to Green Ridge on a cold November evening in 1886.

Fans of Kashuba’s weekly local history column in The Scranton Times-Tribune are in for a treat. Learn how members of the family connected with the historic Tripp House were kidnapped and murdered by Native Americans. Discover how a journey from Clarks Summit to Scranton was made perilous by the screech of the panther and the cry of the wolf. Uncover how the Scranton family came to settle in the area only after a previous investor died after falling off his horse. Read how the burning of anthracite coal came about only after a Wilkes-Barre blacksmith fell asleep leaving his furnace burning throughout the night.

Why did the Scranton area remain a wilderness during the American Revolution and beyond (with Pennsylvania being the second state in the Union)? Kashuba explains this anomaly as resulting from a disagreement between Pennsylvania and Connecticut settlers over faulty land agreements made by King Charles II of England. No one definitively owned the land. It was fought over rather than built upon.

Modern achievements are skillfully intermingled with earlier noteworthy events. Civil War prisoner of war and former mayor, Ezra Ripple is remembered along with World War II Medal of Honor winners Gino Merli and Joseph Sarnoski. The success of the Scranton/Wilkes-Barre Yankees is recorded with that of the Scranton Red Sox. The refreshment provided by Lake Lincoln parallels the water slides of today’s Nay Aug Park.

An introduction by Mary Ann Moran Savakinus, the director of the Lackawanna Historical Society, provides a thorough outline of the key points Kashuba illustrates in greater detail throughout the book.

If you are looking for a concise, easy-to-read history—look no further. For all those who hold Scranton in their hearts: welcome home.