Bridge to the Sun: The Secret Role of the Japanese Americans Who Fought in the Pacific in World War II 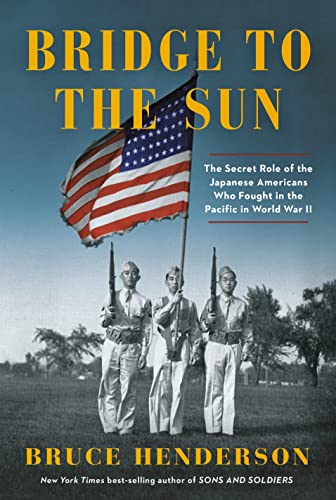 “A magnificent job of bringing this little-known history into the full glorious light where it belongs.”

Bruce Henderson does a magnificent job of bringing this little-known history into the full glorious light where it belongs. Japanese American units that fought in Europe are rightly famed for their bravery and dedicated patriotism, but the story of Japanese Americans recruited for their Japanese language skills to fight in the Pacific has remained hidden for far too long.

Henderson provides effective context for this complicated history, including military documents that spelled out the suspicion felt toward Japanese Americans in the service. His careful research allows him to lay out the larger framework, while still making the history intensely personal and effective by concentrating on the work of six men, each a different war story, each uniquely powerful and impressive.

Henderson doesn’t mince matters but bluntly portrays the issues these men faced: “They fought two wars simultaneously; one, against their ancestral homeland; the other, against racial prejudice at home.” Several had families interned in camps; some had even been recruited from camps themselves.

“They were being kept behind barbed-wire fences because the U.S. government questioned their loyalty, and now the Army needed them to volunteer in the war against Japan, the very country they were suspected of being sympathetic toward? Even the most patriotic Nisei harbored strong feelings that their rights as U.S. citizens had been violated. And yet, from their bleak, barracks-like quarters, waves of young Japanese Americans answered their nation’s call. Implored one tearful mother to her departing nineteen-year-old son as he left to join the Army: ‘Make us proud.’”

Some of these men were destined for the newly created Military Intelligence Service Language School. It was crucial that American troops be able to understand the Japanese they would encounter. Many of the Japanese radio messages weren’t even in code, so sure were they that westerners couldn’t understand their complicated language. The six men profiled in the book used their knowledge of Japanese to warn about planned attacks, to decipher notes and maps hurriedly left behind by Japanese troops, to talk to prisoners. From Burma to Okinawa to New Georgia, countless lives were saved because of the risks these brave men took.

One soldier, Kazuo Komoto, was the first Nisei soldier to receive the Purple Heart. He had grown up in California where restrictive anti-Japanese laws meant his Japanese-born parents were ineligible for citizenship and unable to own land or even have long-term leases on it. Despite this shoddy treatment from his country, Kazuo faced Japanese marines in New Georgia, where he was shot. When he recovered, he returned to the Pacific to face yet more battles.

Another soldier, Grant Hirabayashi, acted as interpreter for Korean “comfort women” who had been brought to Burma as sexual slaves for the Japanese troops. The women were so touched by the kindness of the Nisei, they sang a thank-you song to them. It was a moment Grant wouldn’t forget.

Each of these men has an equally touching and important story to tell. Combined they create a powerful impression of courage and heart, of doing what is right even when wrong has been done to you. Henderson has given us all an important gift in this book. It should be widely read; it is a history that needs to be known.