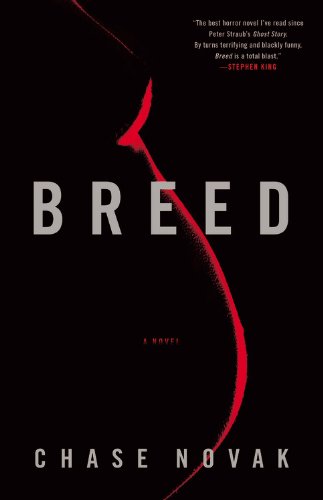 Nobody will ever coo over it or pinch its little rosy cheeks. Nor will it ever win any bouncing baby competitions. Indeed, one can imagine this novel conceived in a “workshop of filthy creation” (as in Mary Shelley’s Frankenstein).

Like Frankenstein, this is a dark work of fiction that overcomes—no, transcends—genre boundaries and embraces the category of literary fiction despite being . . . ugly, or at least dealing with ugly subjects. Breed might just turn out to be Chase Novak’s prodigal son.

Breed is a daring, ultra-modern novel dealing with bleeding edge science and contemporary concerns. It’s dark fiction, but not as we know it. An antidote to the anodyne paranormal romances, vampire horrors, and gory splatterfests littering the book charts, this is a truly original work. While transcending the modern, it also deals with universal themes populating literature since we first started telling stories around campfires.

Ultimately, this is a novel about the dangers of science—bogus science in particular. It’s a story of the Promethean folly of human beings, written in urgent, vital prose that quickens the blood. It confronts.

At times Breed can be a visceral, grueling read. At its heart, it is the story of the trials of a couple unable to conceive and the desperate measures they’ll go to in order to make their dream of a family come true. What transpires, however, is nothing short of a nightmare.

This is fiction playing on the anxieties of conception and childbirth, having ably picked up the baton of Rosemary’s Baby and run it into the present day. But the fertility treatments and the desperate need for a child are also eerily reminiscent of the U.K. thriller writer Peter James’ 2011 novel Perfect People.

Our protagonists are Alex and Leslie Twisden. Alex is a moneyed lawyer from a family rich in heritage. He lives in a house that: “. . . was one of the few residences on this block that had not been broken up into apartments, and the only house in the neighborhood owned by the same family since its construction. It was one of those places that seem immune to change, ever lovely, and ever redolent of privilege and the provenance that justifies the continuation of those privileges.”

Leslie, “though single and childless herself” is an editor of children’s books for Gardenia Press, and she sometimes passes Alex’s huge home on her way in to work.

A chance meeting quickly accelerates into marriage—Leslie amused to discover that some see her as a “gold digger”—and then they want to take the natural next step: starting a family. Only there’s a problem in their otherwise charmingly perfect lives: They can’t conceive.
“The good fortune of their lives is overshadowed by an absence that, for all its invisibility, casts a long shadow. When they are not avidly pursuing pregnancy, it seems that they are determinedly avoiding things that make them confront their childless state.”

They try all kinds of treatments from prayer to acupuncture and even some downright quackery, and despite not being priced out of the baby market as some couples are nothing seems to work.

They attend a support group in which various other couples in the same position share their stories of desolation: “Two of the nine couples in the group have already separated—infertility can wreak havoc on a marriage—yet both the husbands from these defunct unions continue not only to show up for meetings but to dominate the discussions.”

Indeed, Alex and Leslie begin to have their own troubles: “For the hundredth time Leslie has asked him if he would have married her if he had known they were going to cast her into the medical hell of infertility, where the devils west white and smell of hand sanitizer and think nothing of charging thousands upon thousands of dollars for failure, and in fact make you feel that the failure is not theirs but yours.”

Here the real horror lies in the desperate sadness, the almost reckless willingness of the couple to try anything in order to “succeed.” Leslie grows used to the ritual humiliations comprising fertility treatments for women: “At this point I’m like a clump of dirt waiting for the farmer to shove a seed in me.”

But in one final desperate throw of the dice, Alex and Leslie decide to travel to Eastern Europe to try a new miracle treatment. With no idea what to expect, they fly to Ljubljana, landing at an airport Leslie compares “in terms of its size and importance” with Poughkeepsie. And from there to the city, which “exudes a kind of postsocialist anonymity.”

Their extreme discomfort is only enhanced when they reach the “rabbit warren” examination rooms of the Frankenstein-like doctor, Kis (who “looks like one of those concert pianists in the movies, the kind who are struck with amnesia or who hear voices, who triumph briefly in the concert hall and then descend into a final madness.”). In the waiting room, they are accompanied by a locked filing cabinet, “a dog food bowl, and a water bowl in the corner, and the remains of an immense bone, a giraffe femur, by the looks of it.”

Their utter degradation is now complete in this sickening parody of the sexual act and of the conception they hoped for: “ ‘No!’ Leslie cries from the next room, wailing without hope. At the same moment, the dog rises on his back legs and wraps his front paws around Alex’s right leg, about thigh high, and begins to thrust. Zeus humps away, thrusting, thrusting, stench rolling from his mouth and nostrils in scalding waves, his lurid red, glistening penis brushing against Alex’s trousers, thoroughly wetting them.”

Of course, a pregnancy results, and the babies are born, but the procedure has taken a lot from the couple. . . . And has added something to them, too. The twins, Adam and Alice, grow up in what they think is a perfectly normal house—except every night without fail their parents lock them into their rooms.

What follows is a horror story full of twists and turns as the twins endeavor to escape the clutches of their parents. But the true horror of the tale lies in the inhuman, inhumane treatments Alex and Leslie are forced to subject themselves to in the first third of the book—and in the way their psychologies are so altered by being unable to perform that basic function: procreation.

Breed is an intelligent, dark thriller dense with paranoia, reflecting creative anxiety, a genetically modified rollercoaster. Chase Novak is being proclaimed as a “new name in horror,” but Mr. Novak is actually the penname of Scott Spencer, the author of 10 previous novels, including Endless Love, which has, according to reports, sold over two million copies to date.

In Breed he has written a novel challenging our thinking by asking only the start of a simple question: What if . . . ?