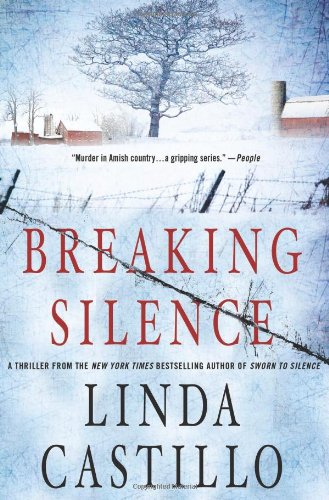 The contrast is startling and seems contradictory: How can you have a peaceable small town that hides hatred so deep it results in animal bloodletting? This is just one of the many contradictions in Painters Mills, Ohio. The English and the Amish may live closely geographically, but there are strong emotions on both sides.

This is the third in a stupendous series; it’s critical that they be read them in order because in Breaking Silence, the author reveals who the bad guy was in the last one. This is also the most personal—we know Chief of Police Katie Burkholder grew up Amish, and how she lost her innocence, which eventually lead her to leave the Amish life. But she’s back in her hometown determined to protect everyone in her jurisdiction.

That’s not so easy with the Amish. They want nothing to do with the “Englischers” and most attacks on them go unreported. Katie tries to get descriptions of the perpetrators, but victims refuse to cooperate. Kate remembers this chasm all too well. And there’s another horrific crime to be investigated: An Amish farmer, his wife, and his brother are asphyxiated to death by methane gas when they fall into their farm’s manure pit. It’s only when the autopsy is conducted that reveals it to be murder. It’s unclear if this is an escalation of the hate crimes or something else altogether.

Because the attacks are designated hate crimes, Special Agent John Tomasetti is called upon to investigate. He and Katie are not quite sure what to call their relationship, other than to understand the stress that cops experience is best understood by someone who has been through it. He has, and he helps Katie navigate her emotions here. This could be a cliché—tough lady cop who doesn’t want to cry—but it’s handled with care.

Katie is upset because she knows she should not get emotional about her cases. But she feels a strong kinship with the four orphaned children. She knows how life looks once the veil of innocence is torn, and how different everything will be without their mamm and datt. She has an especially fierce connection to 15-year-old Salome, because Katie was just about her age when her life changed. Author Castillo does a beautiful job expressing the Amish reverence for children, which makes the lost virtue of these four even more heartbreaking.

There is an uncle that loves them and wants to take them in, but he’s been excommunicated because he fell in love with an outsider. The bishop wants the children to be raised Amish. Does blood win over keeping them in a community where they have spent their lives and feel kinship? In the case of the Amish, it’s not a case of shuttling the children back and forth: You’re in or you’re out.

Written at a thrilling pace, with haunting images, Breaking Silence is a novel worth staying up all night to reach the end.