Breaking Barriers: A History of Integration in Professional Basketball 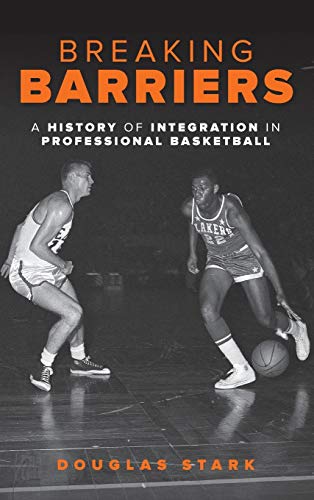 “In Breaking Barriers, Stark has taken on an important chapter in American Sport and in the history of desegregation in America.”

The book spans the history of professional basketball from its early years near the opening of the 20th century and concludes with two chapters containing mini-biographies of the major NBA stars of the past half-century. Although the desegregation of professional basket is a central focus of Breaking Barriers, there is a second focus on African American basketball and its players, both before and after segregation.

No story of professional basketball in the first four decades of the 20th century is complete without attention being given to the Renaissance Five, whose founder and owner, Bob Douglas, is a towering figure in the history of African American basketball. The Rens, as the team came to be known, were one of the best basketball teams in the country. Their rivalry with the all-white Original Celtics is legendary, and it produced some of the best basketball of the first half of the 20th century.

Some of the best professional basketball during the 1940s and early ’50s took place at the World Professional Basketball Tournament. Stark tells the story of this annual basketball showcase that began in 1939 and featured the best African American teams and two integrated teams from the National Basketball League (NBL). The games of greatest interest were those involving the Rens and the Globetrotters.

With the growth of professional basketball after WWII, the World Tournament took on greater interest as African American teams, integrated teams, and all-white teams competed. The emergence of the Minneapolis Lakers, led by George Mikan, created considerable discussion concerning which team was the best in professional basketball. When the Minneapolis Lakers entered the World Tournament in 1948, that question was answered as the Lakers defeated the Rens in the finals.

The post-war desegregation of basketball, of both teams and leagues, and the formation of the National Basketball Association out of a merger between the NBL and the Basketball Association of America, changed the racial and geographical landscape of professional basketball. Stark explores these developments and then takes his narrative in another direction. The final chapters are devoted to the African American basketball stars of the NBA and, briefly, the ABA before its merger with the NBA. For anyone familiar with the NBA, there is little that is new here.

Stark offers an encyclopedic look at the major African American players in the postwar era from Bill Russell, Wilt Chamberlain, and Elgin Baylor, to Magic Johnson, Oscar Robertson, and Kareem Abdul Jabbar.  Beyond those are Julius Irving (Dr.J), Isaiah Thomas, and Shaquille O’Neal. Stark completes his gallery of greats with Michael Jordan and LeBron James. Interspersed are a number of other NBA All Stars, some of whom are easily recognizable to basketball fans and others who are less well-known.

Stark’s book is quite informative while, at the same time, disappointing. There is way too much cut and paste that inhibits any narrative flow. In addition, there is nowhere nearly enough historical context and very little analysis. There is some attempt to place all of this into the history of the times, but, in the end, it falls short.

The most satisfying material deals with the pre-World War II period. Although there is a large bundle of information here, a definitive work on the overall subject is still needed. Breaking Barriers is a good introduction to a basic set of facts and players but that, by itself, only breaks the surface on this very important story. Unfortunately the facts very rarely speak for themselves.