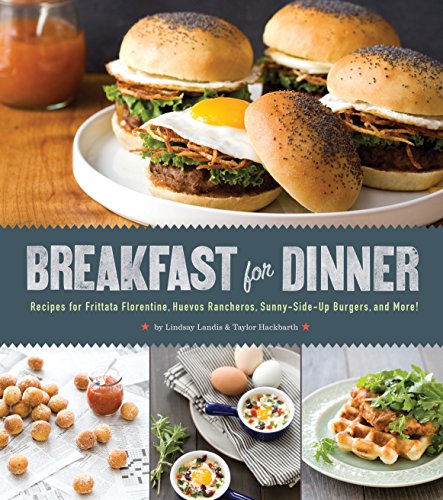 “. . . promises some breakfasts worth staying up for.”

Soothing and simple: That’s what a “breakfast for dinner” meal should feel like. In Breakfast for Dinner, though, authors Lindsay Landis and Taylor Hackbarth aim for (sometimes vaguely) breakfast-inspired supper dishes that are often delicious but not so simple. So if breakfast for supper to you means a milky bowl of cornflakes, move along.

On the other hand, if spending at least an hour on such main dishes as polenta cakes with shiitake mushrooms or breakfast sausage ravioli (with homemade pasta) is what you mean, the authors have plenty of intriguing suggestions.

What do those polenta cakes have to do with breakfast? Why, they have poached eggs on top. Likewise, sunny-side-up eggs make a burger breakfasty. Moroccan-spiced chicken points back to breakfast by turning into puff pastry-wrapped “cinnamon rolls.” And bacon and espresso powder turn baked beans into a breakfast-supper hybrid.

Some of the recipes—frittatas, baked eggs, omelets—don’t require contemplation to catch the breakfast tie-in, and provide an appreciated balance to the more complex recipes, though they offer little inspiration to experienced cooks. New cooks may enjoy this book less than experienced ones, because while the recipes are generally solid, they often cry out for tweaks.

Monte cristos, for example, take a good idea—goat cheese, turkey, and hot pepper jelly—not quite far enough. The sandwiches (brushed with the typical egg-milk mixture rather than dipped in it) come out crisp enough, but the filling is heavy and oddly dry despite the cheese, partly due to dividing ¼ cup jelly among four sandwiches. That small brushing of jelly doesn’t add the oomph the sandwich needs; experienced cooks might boost it with rosemary and more jelly.

Maple-glazed pork meatballs seem straightforward enough—ground pork enlivened with some onion, apple, ginger, and other spices—but feel surprisingly time-consuming. If made as suggested, for an appetizer, these will seem like quite a lot of work (plus fairly heavy for an appetizer), but the succulent meatballs under a sweet glaze of maple syrup, tomato paste, apple juice, and cider vinegar work just as well for a main course. (Look out for the spitting glaze as it cooks down.)

Cornmeal pancakes with beer-braised short ribs, on the other hand, may first appear like a lot of work, but the time involved is nearly all hands-off. Mini BLT biscuits optimistically claim to take just 30 minutes to make (partly by calling for already-cooked bacon). Still, the payoff comes in a nice appetizer or light supper of biscuits with the traditional BLT filling, plus a dollop of honey mustard often found on Southern ham biscuits, which suits these far better than a BLT’s usual mayo.

A few quick dessert options provide nice closers, such as panna cotta flavored with Earl Gray tea, and popsicles made simply with coffee and sweetened condensed milk. Others among the dessert recipes are the least imaginative and hold the least appeal in this book—mashing the bacon and cupcake crazes into one recipe for maple bacon cupcakes, and offering an unnecessary recipe for doughnut fudge sundaes.

But breakfast—morning or night—doesn’t really require dessert. Better to judge this book by its cover: With its photos of burgers, parmesan beignets with tomato jam, baked eggs, and chicken and waffles, it promises some breakfasts worth staying up for.