The Breaker (A Peter Ash Novel) 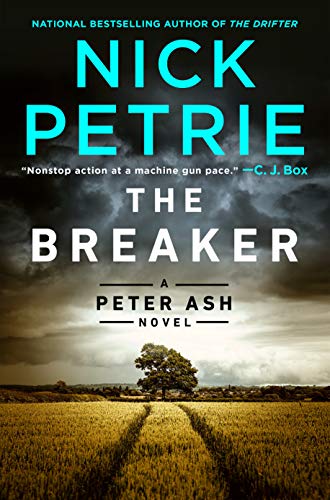 “Nick Petrie keeps it all moving, with all the balls in the air, so there isn’t really time for disbelief—just for the next weapon and defensive maneuver, with an edge of self-sacrifice.”

Readers of (early) Lee Child, John Gilstrap, William Gibson, and even Stuart Turton, Dale Brown, and Emily St. John Mandel, rejoice! Nick Petrie’s Peter Ash series, now in its sixth title, is fine-tuning military and cyber-savvy suspense with a dose of advanced technology, all blended with compelling character development. The Breaker is a page-turner where courage, instinct, and initiative are constant necessities, and failure means the ultimate sacrifice.

All of which Peter Ash is deeply familiar with, as a war veteran Marine with PTSD who’s only just begun to be able to sleep entire nights indoors with his lover, June Cassidy. When Peter and his buddy Lewis intervene in a potential mass shooting in a mall, they stumble into techno weapons far beyond either one’s experience.

But sometimes the world had other plans.”

Tracking the getaway vehicle from the potential massacre takes Peter and Lewis first to a specialist in metalworking, and then to the electronics shop of Milwaukee’s South Side MakerSpace, where relatively antisocial geniuses have room to develop their craft. Especially that of a woman known as Spark, who has some unfathomable connection with why the massacre did—or didn’t—take place.

Before Peter, Lewis, and June—who is a crackerjack investigative reporter—can get this sorted out, hellacious threats to their lives and those of the people they care about land in their home neighborhood. And if at least one of those threats seems a tad unbelievable (a real monster of a slasher!), the action scenes are totally on target.

Then the plot takes a sharp twist with the arrival of a deniable government action leader named Oliver, calling Peter back to the level of sacrifice that the Marines did:

“Oliver’s face showed neither pain nor distress, only the same dispassionate calm he’d displayed the entire evening. In Peter’s experience, this was not just the sign of a national security professional, but also of a true believer. . . . It was about doing the work, no matter the cost. No matter how many bodies piled up.

That’s what made true believers so dangerous.

Peter had been one himself, until the war beat it out of him.

Now all he had left to believe in was people. His friends and family. The people he loved.”

Faced with threats at a level that he and Lewis can’t manage on their own, Peter accepts an unhappy coalition with national security.

And then the threats get worse.

The pace in The Breaker is relentless, the action dependent on both weapons and truck chases, and the descriptions beg for a film version.

A small heads-up: When the bad guys finally bring out the full technological weapons that the little makerspace entrepreneurs have made possible (all of it pretty realistic, although chemist and physicist readers may wince at the term “carbon ion”), the monsters are terrifying and definitely sci-fi level. Or speculative fiction. Or, darn it, maybe they’re possible after all, just not yet manufactured on this scale.

At any rate, the battle of friends versus power-hungry creeps takes on new dimensions, and Nick Petrie keeps it all moving, with all the balls in the air, so there isn’t really time for disbelief—just for the next weapon and defensive maneuver, with an edge of self-sacrifice.

Petrie slaps out a highly satisfying finale, and there’s only one thing to do after finishing The Breaker: Check the titles of the earlier five in this action series and start stacking them up for a binge read.