The BreakBeat Poets Vol. 3: Halal If You Hear Me 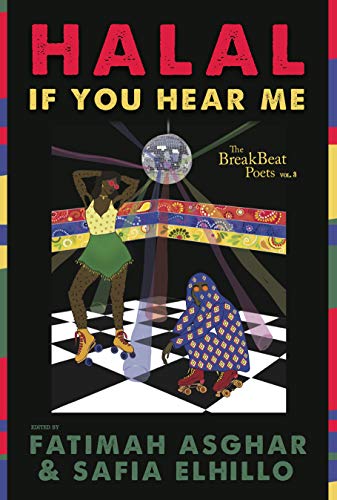 Anthologies of poetry tend to resist reviews, but when a collection like the humorously named Halal If You Hear Me, (halal, at play with holler, is the Arabic word for pure or kosher) sets out to define a certain artistic community, a set of collective concerns emerge.

As co-editor Safia Elhillo states in her introduction, this volume seeks to expand our definitions of what it means to be a Muslim, through presenting the “sheer cacophony of Muslimness, of Muslim identities, of Muslim people. ” Her co-editor Fatimah Ashgar adds that her intention is to recreate the social poetics of the hamaam, or public baths, where women are free to speak openly, and reveal them selves “in our real, naked skin.”

Like the previous two volumes in the BreakBeat Poets series, this third collection is directed toward the Hip-Hop generation (largely defined) and succeeds in its stated purpose of “recording and remixing a fuller spectrum of experience of what it means to be alive in this moment. . . . expanding the canon for the fresher.” And it’s true, the work here is exciting, and brings us news of a wider world. Whatever narrow conceptions we might have held about Muslim experience or Muslim poetry in the global diaspora, is hereby exploded.

Part of “remixing a fuller spectrum” in this collection is in the intersectionality of being Muslim, with being an immigrant, religious, secular, a woman, genderqueer, or trans, and the way these positions reflect so much of what is at work in the global flux. The works share, for the most part, a tone of courage and confidence that so often comes of being tested. Whether punky, devotional, or political the inventive power of so many of the poems points to a whole river of relevant work that’s out there, but not seen often enough.

The collection is arranged in sections titled after the Five Pillars of Islam (Shahada, Sawm, Hajj, Salah, Zakat) though it’s hard to follow overt connections between sections and their contents. There are poems about stating one’s faith, giving alms, travelling, but also about love, motherhood, all manner of family dramas, poems of hair and poems of the body, poems of the street.

The variety extends to the urban Hip-Hop influenced work of Aisha Sharif whose poem “Why I can Dance Down a Soul Train Line in Public and Still Be Muslim” explains, “I mean my Islam be/ who I am-black, born and raised/Muslim in Memphis, Tennessee, by parents who converted black.”

In the dream-like “Freedom Bar” by Asnia Asim, (a Pakistani) she writes “I wear the hijab and walk into Freedom Bar / Someone says Go Home Terrorist and I wake up/ in my kitchen with my mother worrying about/changing my brother’s name, Osama, she peels/ a wooden onion, It means lion in Arabic. Tears/ stream down her face and their liquid salt/fills my mouth.” This poem which has the narrator “waking up” in various locations, almost echoes the pantoum form but not exactly, and although Asim has published ghazal elsewhere, little of the work here references Arabic poetry in any classical sense. Rather classical references and images are routinely subverted and transgressed.

In her poem “Any Other Name” Khadijah Queen speaks of  the weight of being beautiful while being named for the prophet’s wife, “In the name of Allah Most Gracious Most Merciful shouldn’t I/ thank God for the kind of beauty/ that makes me so desirable an object/ so in demand by strangers/ you might say my name cursed me/ to solitude. I don’t see any prophets around,/ do you? If so, pass out my number/ tell him I said what’s up/ where have you been all my life.”

There are overt references to prayer such as in Iranian poet Kaveh Akbar’s poem “What Use is Knowing Anything if No One is Around”:  “Once as a boy I sat in a corner covering my ears, singing Qur’anic verse/after Qur’anic verse. Each syllable was perfect, but only/ the lonely rumble in my head gave praise. This is why/ we put mirrors in birdcages, why we turn on lamps.” Or this line from “After A Boy Steps into the Water”:  “mecca is a moth/ chewing holes in a shirt I left/ at a lover’s house.”

Saaro Umar, an Oromo (a district in Ethiopia) who lives in Australia writes movingly of immigrant displacement in “Geography Test” [the doctor] “/rests his hands at the end of the counter/ &/asks/ where is your country?/ she draws her/finger to the middle of her chest/etching circles onto skin/ her tongue loops the enclave of her cheeks/ . . .”

Questions of belonging and identity politics are foregrounded throughout this collection, but they are also diluted. As the editors succeed in dismantling any preconceived notions we might have had about Muslim women’s (and trans) experience, they undercut the very premise on which so much of identity focused art is based. What is gained from identifying these writers as part of the group of “Muslim women poets” when the result is really to reveal that there is no such thing as a definable shared aesthetic, nor is there a set of shared experiences, nor a set of shared beliefs?

There is a conceptual contradiction at play in so much identity focused art, which names and outlines the differences between us, even as it demands that these differences be ignored. We want to define ourselves by the groups we belong to, feminist, queer, poor, black, Muslim, all the time insisting that we shouldn’t be stereotyped by group. Muslim women writers are not alone here.

One premise at work in identity politics is the idea that certain groups are outside of the homogenous mainstream culture we live in, and yet how homogenous really has American culture ever been? Subcultures flourish here, immigrants continue to redefine our social fabric. It is hard to see many of the writers included in this anthology as marginalized.

Fatimah Asghar has been nominated for an Emmy, the writers’ bio pages are studded with Stanford and Rosenberg Fellowships, MFAs, teaching jobs, state funded arts grants, New York publishing contracts, and NEA fellowships. As well they should be, good writing deserves support regardless of its identity.  Or because of it? Of course real prejudice does exist, people suffer under it, and anthologies like this serve a critical social purpose in bringing our illusions to light.

Safia Elhillo’s (Sudanese by way of Washington, DC) prose poem “Now More Than Ever” provides a fitting summary on the situation as a whole. “I feel least Muslim when describing, explaining, what makes me feel like a Muslim. / I feel most Muslim in the mornings. Or I feel most Muslim sweating at a party, in the dark, sweat glistening off the high points of my face./ (Everyone wants me to say I feel most Muslim at the airport, randomly selected for additional screening . . .)/ My being hunted did not make me Muslim. Or more Muslim. The election did not make me Muslim, Or More. Or less. Not Now More Than Ever. Since the beginning.”

Barbara Roether is a staff reviewer at New York Journal of Books.