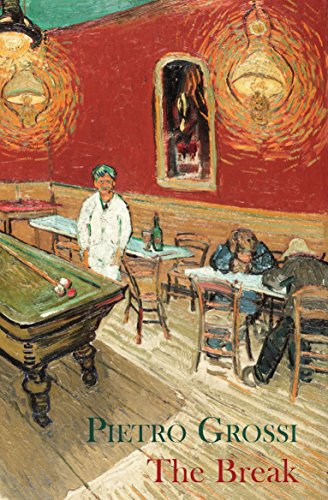 “The Break is reminiscent of Italian neo-realist cinema of the late 1940s and is enthusiastically recommended to all readers. Kudos to Howard Curtis for a wonderful translation.”

“How many stones do you think it takes to make a person?”

Pietro Grossi’s The Break is a beautiful and deceptively simple little novel—one driven as much by language as by plot—about a quiet, happily married stonemason whose passion is the pocketless Italian form of billiards played with three balls in which the objective is to get one’s opponent to knock down a set of pins in the middle of the table. He is an introspective yet logical fellow who is drawn to the physics and geometry of billiards and the trajectories of its shots.

Dino lays cobble stone streets for a living, a craft his ancestors have pursued for generations (perhaps as far back as the paving of the Appian Way). If billiards is part science, laying stones is an artisanal pursuit.

“There was no precise logic to the way you placed the stones. It was something that had puzzled him when, still a child, trying to place a stone, he had asked his father what distance from the others it should go.

“‘Trust your eye,’ his father had said, in that voice of his that always seemed to be breaking through a wall from another world. . . .

“‘Isn’t there a specific order?’ he had asked.

“Dino’s father had found it strange to hear those words used by a child, especially his own son, and for a moment he had sensed something new and unknown. ‘No, Dino, there’s no specific order,’ he had said, in a voice that wouldn’t have been expected of him.”

“It had become a kind of game—every now and again, one of them would come home with an idea for a new destination, and they would start to get excited about it, as if they were really leaving, and they would start imagining the places they would visit and how they would get there and who they would meet. They even bought a big notebook with a thick coloured cover, where they wrote down everything in preparation for when they left.”

And then, in the first chapter, Sofia tells Dino she is pregnant.

“‘What about the traveling we were going to do?’ Dino asked, realizing suddenly that years had passed, and then more years, and he had long left his youth behind him, and yet had never traveled, not even when he was young and free and not a father.

“‘Dino,’ Sofia said. ‘We’ve never been anywhere, where do you think we’re going to go now?’”

The order in Dino’s life is more distressingly upset when the town government decides to replace its cobblestone streets with asphalt, a decision motivated more by official graft than by fiscal frugality. With a child on the way Dino has no choice but to give up his family’s craft and accept a job paving over his handiwork with blacktop. But he soon loathes the work, which offends his sensibilities.

“That vile beast appeared at the end of the street, puffing and shaking. A gigantic mouth full of black steaming sludge gaped open, as if stupefied, with pieces of tar dripping from it like some demonic slime. As the beast advanced, it was as if someone was twisting its guts with a pair of pliers, making it creak and groan with pain, forcing it to squeeze out into the sky that smoke as dense and black as effluent from the sewers. As it came closer, it gradually slowed down and sank into itself, hissing and blowing white steam from its ears. It gave a final belch, a lump of black sludge rolled down one side of its foaming mouth and settled on the rest of the steaming heap.”

Dino confides his vocational dismay to Cirillo, his mentor at the billiards parlor.

“‘I can’t do it. I can’t spend every day in that black shit. It was different before. Before, everything seemed the way it ought to be. Before, I didn’t ask myself any questions. Before, I spent the days counting how many stones it would take to make my child. Now I spend the days trying not to ask myself any questions, especially how much more of that coal-black cancer I’ll have to spread so that my child can have a life.’”

Cirillo, however, has noticed that Dino has become a much more proficient player.

“Cirillo often watched Dino playing alone. A year earlier, he had even stood there watching him for an entire evening, without Dino noticing. ’And every time he watched him play, he wondered if Dino would ever beat him. It was hard to say, but one thing was certain—if it did ever happen, it would be a great game. Thinking about it, Cirillo couldn’t really figure out why it was that Dino had never managed to beat him—he never missed a shot, always got the cover. If you looked closely—not that he would ever admit it—Cirillo actually made a few more mistakes than Dino did. And yet, when they came to add up the points, Cirillo’s shots always scored more, and by the end of the game they weighed in the balance like blocks of granite.”

At Cirillo’s suggestion Dino enters and wins a tournament whose prize is a gold ingot. Dino can now quit his day job and turn his passion into a profession. Dino appears set; his wife is expecting; he’s winning tournaments and earning more money than he ever had before. But someone starts setting off bombs in the town hall, and the equilibrium of Dino’s life is about to teeter.

Mr. Grossi has cited Ernest Hemingway and J. D. Salinger as influences, and while his prose has Hemingway’s directness and focus on traditional male pursuits (the title novella of Mr. Grossi’s previous book translated into English, Fists, is about boxing) it also has a quiet, almost somber introspection all his own. In addition to Cirillo there are several other minor male characters—Dino is the foreman of a road building crew whose members include two immigrants and a contemporary of Dino’s father—but besides Sofia there is only one other female character, Rosa, an elderly florist.

The comparison with Salinger seems more of a stretch; how many readers can imagine the Glass family as lower-middle-class Mediterranean artisans? Nonetheless, The Break is reminiscent of Italian neo-realist cinema of the late 1940s and is enthusiastically recommended to all readers. Kudos to Howard Curtis for a wonderful translation.