The Brave: A Novel 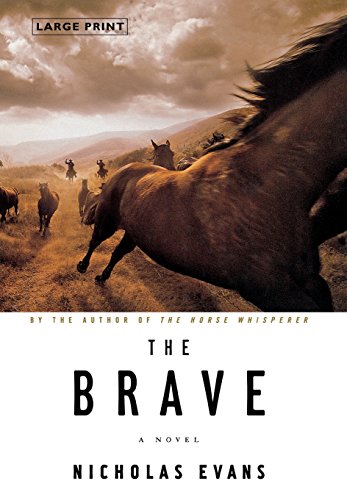 Nicholas Evans is not a prolific writer. Not when compared to other writers of a similar standing who, like he, can generally be counted upon to shift a good number of books. His new novel, The Brave, is only his fifth, and although it is not an unmitigated success, it is very much in keeping with his well-received earlier novels, The Horse Whisperer, The Loop, The Smoke Jumper, and The Divide.

This is writing on a sprawling, epic scale, full to bursting point with authorial emotional investment. Evans lays himself on the line with every sweeping sentence he writes, every haunting landscape he describes. It seems as though he feels everything the characters feel, every punch, every rejection, every failure. There is something faintly old-fashioned about this style of writing—perhaps it is Evans’ moral compass. His sense of right and wrong. And there is something courageous about the way he sticks to his guns and perseveres, despite the occasional criticism that his writing is too emotional, almost mawkish. Because the work which emerges is just as compulsive reading as his debut, The Horse Whisperer.

Bravery can be tiring. So can such emotional investment. Two explanations for his rather small back catalogue and for the long wait fans have between each of his books. But there’s another reason The Brave took a long time to see the light of day; Evans has been suffering a serious illness, he needs a kidney transplant after unadvisedly eating poisonous mushrooms a couple of years back. He needs daily dialysis and tires easily. He finds it hard to concentrate on his writing, and his publishers were apparently very understanding about numerous missed deadlines. This all reads like the plot to one of his books, but it is not; it is the real life bravery of a writer who made one almost tragic mistake and is paying for it over and over again.

Fittingly, The Brave is a book about tragic flaws. It’s about family secrets and mortality. It’s about masculinity and what it is to be a man. According to Evans’ website, the seed of the story started to grow when, “. . . the U.S. and the U.K. invaded Iraq and I saw George W Bush on the TV news down on the ranch in Texas. He was wearing a Stetson and cowboy boots and looked every inch the all-American hero. It got me thinking about how the legacy of the Wild West still informs our current notions of bravery and heroism.”

This neatly sets up the parallel narratives of the story. The first strand is set in 1959, and stars young Tommy Bedford, a boy who tries to explain his confusing home life and his emotional instability (he still wets the bed on a regular basis) by escaping into fantasy, and more particularly, into the world of the Wild West. In his play, he emulates the all-action style of the cowboys; he even counts General Custer as a hero.

“There were deeper things to emulate too, things that were more difficult for an eight-year-old to fully grasp. These were all about what was going on inside. Flint (. . .) kept his thoughts to himself, rarely smiled and only ever spoke when he had something crucial to say. In his solitary adventures, Tommy would assume these manly traits, humming the theme tune or the more dangerous music they played whenever Indians appeared.”

The young Tommy takes the way the cowboys act as a design for his life. This protects him when he is subjected to the horrendous bullying at the boarding school to which he is sent, but ultimately proves to be his fatal flaw. In the Westerns he watches, “it all ended more or less happily, as it nearly always did,” but in Tommy’s real life, things are more complicated. As one character later observes: “The western’s had its day.”

Running parallel to this narrative, we have the second story, the story of the present-day Tommy (or Tom as he now prefers to be called) as an adult living in Montana, separated from his family and emotionally all over the place. He’s almost become the myth—the “taciturn, lonesome hero, the man of action standing up for good”—which Evans talks about on his website. Happier in the company of animals, although in this case it is a dog and not the cowboy’s usual pardner, the horse, Tom seems to have realized just how much his non-communicativeness, his only ever speaking “when he had something crucial to say,” has cost him. And when he learns that his son, Danny, a U.S. Marine serving in Iraq has been charged with a terrible crime, he is forced to confront a past which he’d left hidden behind the myth.

So, as well as being written in a very open, emotional style, The Brave is a book about opening up. Communicating. It’s about emotional rather than physical bravery. It’s about expectations of masculinity. Men aren’t expected to talk about their feelings. They are supposed to be brave, to be men. To get on with it. Early on, we learn “Tommy was as keen on bravery as he was on manhood. The two things went together.” He is determined to become a man and it seems everyone else can’t wait for him to become one either. Staying up late one night, he overhears a conversation between his parents and his sister: “. . . all Tommy could make out were phrases like do the boy good, toughen him up a bit, make a man out of him. Tommy had always been in a hurry to grow up, but even so, eight did seem a little early for manhood.”

Tommy follows his hodgepodge code of conduct into boarding school, the dire experience which is Ashlawn, where if anything, it is reinforced. The school’s motto is “Fortune Favors the Brave,” but its unofficial motto is: Don’t rat on any of your fellow pupils, don’t complain about a beating from the teachers, and above all else, do not show your true feelings. At Ashlawn, Tommy is badly bullied, renamed Bedwetter rather than Bedford, by boys who are simply living up to cruel, brutal, masculine type: “Much more upsetting (than the actual bullies) were the many minor insults and injuries from boys who weren’t really bullies at all, who were often actually quite decent when you found yourself alone with them, but who, in public, seemed obliged to be cruel.”

At Ashlawn, Tommy’s one saving grace is Mr. Lawrence, who takes him out to the local library to borrow more and more reading material in which he can lose himself. Mr Lawrence “smelled comfortingly of pipe smoke like Tommy’s father,” and could potentially have saved Tommy from himself had he not been viewed with suspicion because of his less than manly traits: “Some of the other boys said he must be a homo because a) he wasn’t married and b) his first name was Evelyn which was apparently a girl’s name.” In the end, Tommy’s one moment of triumph in the whole sorry episode is when he takes a beating along with his friend Dickie and refuses to drop the dime on Dickie. Afterward, he describes feeling like they are “brothers in arms.”

We come to discover the more sinister meaning of brothers in arms later, when Danny’s crime is recounted to us. Although he’s stayed loyal to the martial code of conduct, the Marines appear to want to make him a scapegoat for the awful events in Iraq. Effectively, he is being hung out to dry by the very code that he hung his hat on. He looks set to become yet another casualty of war: “. . . the real casualties are the hidden ones, all these young guys—and women too—who come home so fucked up by what they’ve done that their whole lives are ruined—not to mention the lives of those they come back to.”

The crux of the story comes as Tom is forced to confront his own past, the thing he is most scared of—the thing which has given him the most sleepless nights, turned him into an alcoholic and ruined his marriage—in order to reach out to his son. He has to break the unofficial masculine code of conduct. He becomes The Brave by communicating, by opening up, something which is very hard for him to do. He gives up his secret, and thus frees them both to have some kind of relationship. He finds a different kind of bravery.

“He now realized how corrosive it had been for him to keep the secret for all those years. More than corrosive. Secrets such as his were like some sort of malign living organism. They thrived on shame and guilt, spawning a fear that gnawed away at your insides.”

The Brave does seem too neat in the way it draws everything together in the end, and especially with the abrupt conclusion to the trial scenes, but Evans’ bravery, his unwillingness to turn away from painfully honest writing, is admirable. Bravery isn’t about having the guts to do something nobody else will; it isn’t about manly acts of splendid isolation; it’s doing something you are scared of in order to benefit another person. In the end, Tom/Tommy becomes a true brave.?