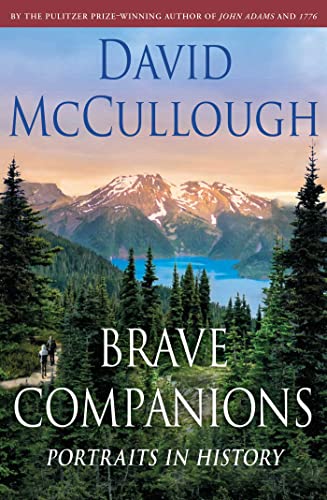 “David McCullough’s Brave Companions is a welcome reminder of how history should be written.”

The recent reissue of David McCullough’s Brave Companions: Portraits in History is a welcome reminder of how history should be written. McCullough, who died earlier this year, wrote wonderful biographies of John Adams, Theodore Roosevelt, Harry Truman, and the Wright Brothers, an exciting history of George Washington’s army in the early years of the War of Independence, engaging and informative books on the building of the Brooklyn Bridge and Panama Canal, and the best book on the 1889 Johnstown Flood (McCullough’s first book).

Brave Companions, first published in 1992, is mostly a collection of articles McCullough wrote for American Heritage, Audubon, Smithsonian, the New York Times Magazine, and other publications. The pieces in Brave Companions are historical and biographical vignettes about writers, artists, scientists, engineers, aviators, politicians, and explorers.

Included among McCullough’s Brave Companions are: Alexander von Humboldt, the great German explorer and man of science whose expedition in the late 18th- early 19th centuries to South America and his subsequent  writings “capture[d] the imagination of the age”; Louis Agassiz, the “master naturalist” who studied the Ice Age and refused to accept the Darwinian notion of a Godless universe; Harriet Beecher Stowe whose book Uncle Tom’s Cabin brought “slavery out into the open and show[ed] it for what it was in human terms”; a young Theodore Roosevelt who memorialized life in the Badlands of North Dakota; Frederick Remington whose sketches and drawings popularized the old West; John Lloyd Stephens, the “driving spirit” of the campaign to construct a railroad over the Central American Isthmus; Washington Roebling who “directed every step” of the building of the Brooklyn Bridge; and Charles Lindbergh who pioneered the age of flight.

And McCullough wrote about lesser-known figures, such as Conrad Richter, of Pine Grove, Pennsylvania, who wrote compelling novels of pioneer life in America; James Caudill of Letcher County, Kentucky, who waged a one-man battle against strip mining in Appalachia; Miriam Rothschild, an expert on fleas, ladybugs, and wildflowers who also worked on the World War II top-secret Enigma project to crack German codes; and David Plowden whose photographs of railroads, steel mills, and bridges, in McCullough’s words, “tell more about the nation and its manifest values than reams of reports and environmental studies.”

McCullough calls his subjects “the givers of civilization” who communicated ”the full sweep of human experience.” “History,” McCullough writes, “is a spacious realm” that includes “unfathomable forces” but can be impacted by a “single personality.”

And McCullough’s book shines light on the woke cancel culture of our own day. None of the people McCullough wrote about and praised were without flaws—some more than others. Charles Lindbergh favored appeasing Hitler, yet also flew combat missions during World War II. Frederick Remington was an anti-Semite who “despised much of mankind,” especially immigrants whom he called the “rubbish of Europe.” In one essay. McCullough praises the laudable John Quincy Adams, but also Thomas Jefferson and segregationist members of Congress. He would likely be criticized for that today.

In the book’s concluding essay, McCullough promotes the study of history: “We must all read history, and write and publish and teach history better.” For more than five decades David McCullough did his part, making history readable, understandable, and pleasurable. That is not a bad legacy for a historian.